Recent developments, including a visit by French politicians and the possible replacement of the French ambassador in Lebanon by Emannuel Bonne, who participated in the Syrian-French negotiations, indicate a probable shift in the French position. 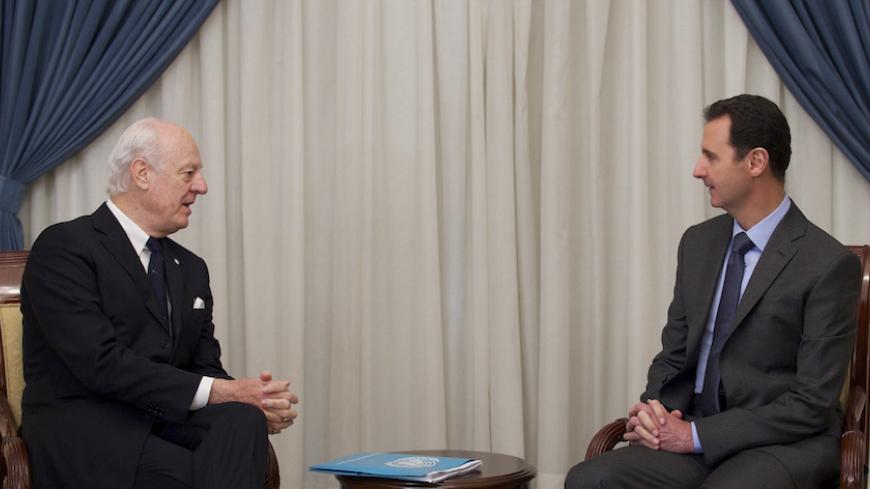 A French political delegation has visited Damascus in a trip that carries multiple implications.

Between UN envoy Staffan de Mistura's statements two weeks ago that Syrian President Bashar al-Assad is part of the solution in Syria and de Mistura’s return to the Syrian capital on Feb. 26, four French parliamentarians and other Parisian officials traveled to Damascus via Beirut. This is the first time a French official has visited Syria since the French Embassy in Damascus was closed in 2012.

Al-Monitor learned from an anonymous diplomatic Syrian source that the plan for the Feb. 24 visit emerged gradually, on the sidelines of an unofficial visit to Paris by an ecclesiastic delegation from the Syrian town of Maaloula that took place approximately three weeks ago.

With no media coverage, the French nongovernmental organization SOS Chrétiens Orient hosted a group of Syrian Christians, including priests and lay people, who came to Paris to raise funds to contribute to the reconstruction of Christian shrines destroyed by extremist militants in repeated attacks on Christian archaeology sites northwest of Damascus, such as Maaloula and Sidnaya, according to the source.

On the sidelines of the visit, the delegation met with a number of French parliamentarians who advocate defending the Christians of the Middle East. Former Syrian Ambassador to Paris Lamia Chakkour was present in these meetings addressing humanitarian work and preserving world heritage in Syria. Yet, the deliberations and discussions quickly developed to include a proposed visit by the French to Syria, to inspect the situation on the ground.

The diplomatic Syrian source added that Chakkour took charge of making arrangements for the visit from the Syrian side, while SOS Chrétiens Orient was responsible for the coordination in Paris. The plans culminated in the arrival in Beirut of a French parliamentary and political delegation, which then traveled to Damascus on Feb. 24.

The delegation was headed by French parliamentarian Jean-Pierre Vial and included parliament members Jacques Myard and Francois Zocchetto, as well as the inspector general of the French Ministry of Defense, Patrick Barraquand, security adviser at the French Embassy in Beirut Stéphane Ravion and Jérôme Toussaint. The delegation also included parliament member Gerard Bapt, who is also a close associate of French President Francois Hollande, of whose party he is also a member. Reportedly, while in Damascus, Bapt’s movements and meetings differed from those of his colleagues.

At this point, the visit went beyond its humanitarian context and became political.

Before making their way to Damascus, the French were keen to meet with a particular Lebanese figure in Beirut. A reliable Lebanese source confirmed to Al-Monitor on condition of anonymity that while in Beirut, the delegation met with a prominent Lebanese Christian politician who has good ties with the Syrian authorities and with Hezbollah.

The politician himself, also speaking on condition of anonymity, confirmed to Al-Monitor that he held talks with the French concerning the situation in Syria and the potential for a political solution there. They were also keen to hear his opinion concerning the terrorist threat facing Syria in general, and the country’s Christians in particular, and ways to confront it. They also wanted his opinion on Hezbollah’s role in the Syrian conflict, including its contribution to confronting terrorists from the Islamic State (IS) and similar groups, and its efforts to defend minorities in the country. The politician told Al-Monitor that the delegation agreed to a second meeting after their return from Damascus, away from media attention.

Another notable aspect of the visit was the meetings held by the French delegation in the Syrian capital. They met with many prominent figures, including Foreign Minister Walid Moallem and parliament Speaker Mohammad Jihad al-Laham, and culminating with a meeting with Assad.

According to reports in the Syrian state media, the discussions focused on confronting terrorism. It is worth noting that Bapt did not join his colleagues in the meeting with Assad and tried to limit his activity to the humanitarian and Christian side. He attended the meetings the French delegation held with the parliament speaker, the foreign minister, Deputy Foreign Minister Faisal al-Miqdad, Syrian Grand Mufti Ahmad Badreddin Hassoun, Roman Catholic Patriarch Gregory III Laham, Greek Orthodox Patriarch Yohanna X Yazigi and head of the Syrian Red Crescent Abdul Rahman al-Attar.

The delegation also visited a French school and a center housing the displaced. Among the delegation, the source said that Bapt’s absence from the meeting with the Syrian president was due to his close relationship with Hollande. The source further hinted that it is likely that he and Hollande reached an agreement that he would go on the trip on the condition that he didn’t meet with Assad, to shield Hollande from any embarrassment.

Following their visit, the French parliamentarians reaffirmed that Assad will be part of the solution in Syria. This is consistent with the earlier statement of de Mistura, yet contrary to the official French position that Assad must go.

Despite its purported humanitarian nature, the visit came just over a month after the massacre at the Paris offices of Charlie​ Hebdo magazine, carried out by Sunni extremists on Jan. 7. At the time, it was reported that the wife of one of those involved, Hayat Boumeddiene, was in Syria or on her way there. Many believe there is a French need for security cooperation with Damascus, especially in light of the frequent talk about the presence of hundreds of fundamentalists who have traveled from France to fight with terrorist groups in Syria, and the French fear of the possibility of their return to France or operating with sleeper cells on French territory.

These developments are linked to exclusive information obtained by Al-Monitor for this report, indicating that the French ambassador to Beirut will be replaced within the coming weeks. According to this information, current ambassador Patrice Paoli will be replaced by a diplomat coming from the Elysee, Emannuel Bonne. The latter currently works with Hollande’s diplomatic team in the presidential palace and visited Damascus during the period of French-Syrian negotiations. If such a swap occurs, this indicates that the French Embassy in Beirut could be used as a back channel to restore communications between Paris and Damascus.

While the French policy to boycot Damascus remains, the appointment of Bonne might represent a way to open back channels of communication.