A Belgian parliamentary delegation, which met with Syrian President Bashar al-Assad on March 24, said that Assad is "protecting Christian cities and Christians from fundamentalist attacks." 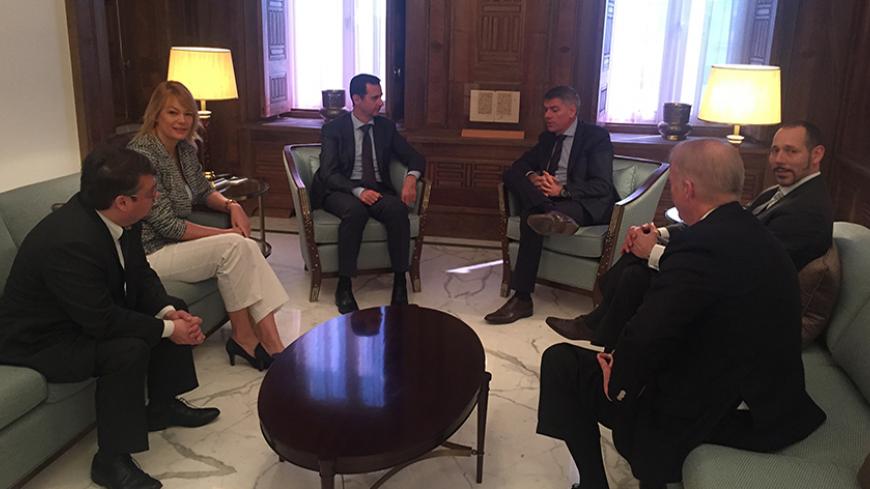 While field and military developments unfold in Syria, Western activity in the country is ongoing. Heavy battles continue in different areas, which entered its fifth year of a multiple-battlefront civil war in March. Western visitors are flocking to Damascus in official capacities, private visits to political figures or European civilian delegations. These trips convey different political, security, popular and civil messages. The first remarkable visit in this regard took place at the end of February, when a French parliamentary delegation arrived in Damascus. This step's political dimensions, preparations and implementation had been discussed at length.

As soon as talk about the visit wound down, another came to pass: a Belgian parliamentary delegation set foot in Damascus on March 24 and then in Beirut, carrying reams of political inquiries.

The Belgian delegation went a step further than the French and met with Syrian President Bashar al-Assad, holding a long discussion about the situation in Syria and the terrorism that is pinning down the Middle East and Europe. Remarkably, some media outlets reported that Assad told his visitors, "Some European countries are committing a grave mistake by allying with countries supporting terrorism."

The members of the delegation were reported as saying, "Syria constitutes the first line of defense in the face of extremism and terrorism. It is the only country fighting terrorism on the ground. If this line is defeated, terrorism will largely reach European countries. This is why we have to support Syria in this war." According to reports, the parliamentarians continued, "Many Western parties and officials now believe in this." This quote has been confirmed by former Lebanese Minister Wiam Wahhab, who told Al-Monitor he heard the Belgian delegation say it more than once.

A statement issued by Santi upon his return to his home country read, “While the media is trying to portray Bashar al-Assad as a savage dictator slaughtering his people, the reality on the ground is different. The Syrian army, in fact, is protecting Christian cities and Christians from fundamentalist attacks. So, let’s try to imagine what would happen should the regime fall.”

The Belgian minister added, after his meeting with Assad, "The basic concerns of the president today are to secure the well being of his people. He regrets the current lack in medicines, especially vaccines for children and cancer treatments. The Syrian regime provides free treatment to the military, the civilians, the displaced people — be they black or white, Christians or Muslims, without any discrimination.”

Santi continued, “The solidarity governing the Syrian people is remarkable. Many Syrians volunteer for free, all working toward one goal: helping the Syrian people through these difficult times. The state of mind of [Assad] is similar to that of his people: He is ready to fight and he is calm. The Syrian peoples don’t want war, but they refuse to surrender, and they stand in the face of the difficulties they are experiencing. "

Wahhab, who met the Belgian delegation in Beirut, told Al-Monitor that they explained to him their belief that current European interests require cooperation with official authorities in Syria to thwart the risk of terror in Europe. They added that a large majority of European politicians are convinced that it was necessary to coordinate with Syrian authorities to fight terrorist cells and elements who came to Syria from European countries.

This coordination aims to track these Europeans and their connections by taking pre-emptive security measures before their acquaintances, friends or colleagues become ticking time bombs. According to Wahhab, the Belgians believe that the problem of the European governments is that the officials were shackled by their own opposition to Assad. The Belgians, however, decided to take the initiative in tearing down these barriers and creating popular European pressure on the governments to cooperate with Assad to at least preserve the security of European citizens. Wahhab told Al-Monitor that the Belgians said these steps will continue to intensify.

Indeed, two weeks following the Belgian visit, another French delegation made up of activists in Christian nongovernmental organizations (NGOs) visited Syria and Lebanon as part of an Easter pilgrimage to holy sites in Syria. The delegation visited churches and convents in Saidnaya and Maaloula, both hotspots for battles between the Syrian army and armed groups before the former expulsed the latter. Remarkably, major French media outlets covered this visit, including Canal France and Le Parisien.

The French delegation had arrived in Lebanon on April 6, two days prior to visiting Damascus. Speaking on condition of anonymity, a Syrian Christian activist who coordinated the French visit to Syria told Al-Monitor that the French pilgrims would meet officials in Syria before moving on to the Syrian coast, mainly to Tartus and Latakia. The activist also revealed that this visit would not be the last. SOS Chretiens d'Orient, the association that organizes these trips, is preparing for more visits and cooperating with similar movements in other European countries to bring aid to Christians in Syria.

The activist said that further igniting the enthusiasm of visitors to come to Syria, days before they traveled, Metro Paris decided to prohibit SOS Chretiens d’Orient from advertising in Parisian metros a fundraising dinner featuring a performance by the French Les Pretres musical trio, the proceeds of which were destined for Christians in Syria. The metro administration ended up reversing the decision after a backlash. However, this incident pushed more pilgrims to visit Syria and spread this activity to different European countries.

Some would think that there are differences in the official political stances of European governments vis-a-vis the rule in Syria, the limited security cooperation with Damascus and the isolated civilian efforts by individuals or NGOs to hold dialogues with the Syrian regime. Developments in Syria will bring these positions closer, and ultimately, European governmental stances may draw closer to civilian positions to meet security requirements for the current biggest concern: fighting terrorism.