The Egyptian request to carry out, under international cover, airstrikes against Islamic State strongholds in Libya was rejected by Qatar, which reveals the emergence of new alliances in the Middle East. 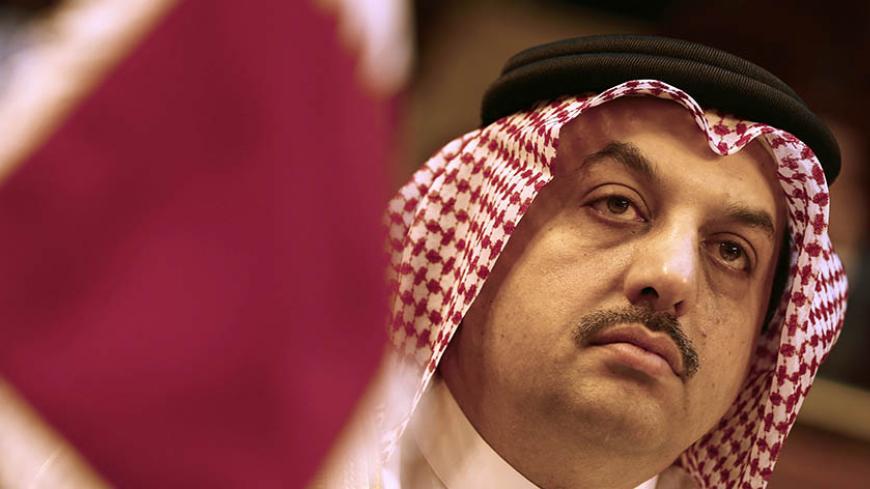 CAIRO — The Egyptian airstrike against Islamic State (IS) strongholds in Libya, carried out at dawn Feb. 16, revealed a lot. On the local level, the Egyptian people welcomed this action and praised their leadership. However, the strike unveiled many changes in the map of alliances in the Middle East, after Cairo was disappointed by its former Gulf Cooperation Council (GCC) allies. The only country to support Egypt’s desire to continue with the war on IS in Libya was the United Arab Emirates.

Yet, despite Cairo’s disappointment in not obtaining international support to enable it to continue its war against IS strongholds in Libya, Egyptian politicians and military experts made calls for there to be naval strikes — along with airstrikes — to reach the group’s bastions in Libyan coastal cities. In an opinion poll conducted just hours after the strike, 76% of Egyptians supported Cairod Cairo carrying out additional airstrikes to eliminate IS, while only 11% were against this.

The poll, carried out by the Egyptian Center for Public Opinion Research (Baseera), showed that 85% of Egyptians approved of the airstrike against IS (65% strongly approved, 20% approved), 8% opposed it (5% opposed, 3% strongly opposed) and 7% did not specify. The rate of approval increases among certain groups: 82% for youth ages 18-29; 90% for those over 50 years old; 79% in Upper Egypt; 86% in coastal regions; and 91% in urban governorates.

It is worth noting that the situation erupted between Egypt and IS after the failure of negotiations aimed at securing the release of 21 Coptic Egyptian prisoners held by the group. On Feb. 15, IS published a video depicting the detainees being beheaded in the city of Sirte.

This comes as there are hundreds of thousands of Egyptian workers in Libya, who are now threatened by IS. Cairo has rushed to facilitate their return to Egypt, amid many questions about the impact their repatriation will have on the Egyptian economy and unemployment rates.

The majority of Egyptian political parties confirmed the importance of the recent Egyptian airstrike against IS outposts in Libya, considering it to be a clear message showing the Egyptian army’s force and readiness. However, there is some disagreement among these parties’ visions when it comes to whether or not to continue the attacks. Some fear dragging Egypt into a war outside its borders, in light of its own internal crises — whether economic or security-based. Other parties called for postponing parliamentary elections and standing behind the political and military leadership, to crush the terrorism threat facing Egyptian national security that emanates from this terrorist group, which has spread to the depth of the Sinai Peninsula.

Supporters of the Muslim Brotherhood in Egypt opposed the Egyptian attack on IS, calling for a revolutionary week kicking off the Friday immediately following the Feb. 20 airstrike under the slogan “Terrorism: a product of the coup.” The National Alliance to Support Legitimacy, affiliated with ousted President Mohammed Morsi, issued a statement Feb. 19 noting that Egypt’s national security and the internal problems facing Egyptians are more important than the “coup regime’s” failed adventures.

On the other hand, on Feb. 21, Egyptian youth launched a huge electronic “demonstration” to support the army in confronting terrorism, using the hashtag #WeAreAlltheEgyptianArmy on Facebook and Twitter. Participants expressed their pride in the Egyptian army, which was not indifferent when it came to avenging the victims of the terrorist act carried out by IS.

The hashtag #HaveYouCursedQatarToday led the list of most popular hashtags in Egypt, and even came in third in the list of top trending hashtags globally. It was used by Egyptians to express their anger toward Qatar. This online activity comes in light of the escalation of a new Egyptian-Qatari crisis, which began with Al Jazeera condemning the Egyptian airstrike and broadcasting images of children and civilian victims in Libya. Later, the Arab League issued a statement confirming that all member states supported the Egyptian air raid with the exception of Qatar, which had reservations.

In response to this Qatari reticence, Egypt’s permanent delegate to the Arab League accused Qatar of supporting terrorism. As a result of this, Doha was quick to recall its ambassador to Cairo for consultations. The GCC took a stance in support of Qatar, and issued an official statement rejecting Egyptian accusations that Qatar was supporting terrorism.

The joint statement issued by the United States, France, Italy, Germany, Spain and the United Kingdom — as well as the subsequent UN Security Council decision rejecting the Egyptian request to provide international cover for an intervention against terrorists in Libya, or even lift the ban on arming the legitimate Libyan army — caused resentment on the Egyptian side. Cairo accused the international community of double standards in its dealings with IS, allowing for strikes against the group in Iraq and Syria but stressing the importance of dealing with it politically in Libya.

The position of Cairo’s allies in the GCC reveals a change in the map of alliances in the Middle East, amid uncharacteristic Saudi silence, which supports speculation of a cooling in Egyptian-Saudi ties following the death of King Abdullah bin Abdulaziz. In light of the recent change in Saudi Arabia’s position on the Muslim Brotherhood, this strongly supports the return of the Egyptian-Russian coalition to the Middle East at the expense of not only US relations, but Gulf ones as well.