The 2011 revolution has changed tribes' relationship to the traditional political parties, leading some of them to vote for the Muslim Brotherhood and to nominate their own candidates. 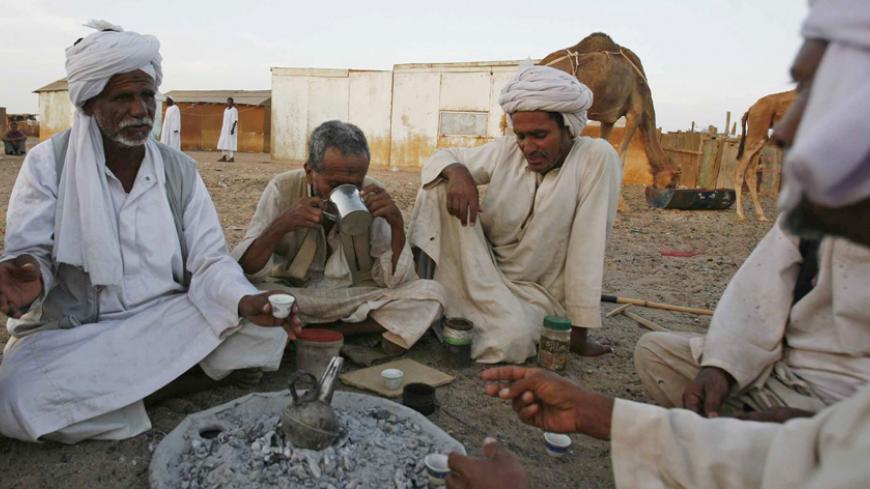 Men from the Baja tribe drink Gabana or traditional coffee, in front of their huts in the Egyptian town of Shelatine, 659 miles (1,060 kilometers) south of Cairo, April 22, 2009. - REUTERS/Asmaa Waguih

With each election season in Egypt, talk gravitates toward the role played by families and tribes in the political process. This was the case for the period that preceded the revolution of Jan. 25, 2011, as well as in subsequent years. Various families and tribes would organize to win parliamentary seats for one of their own, particularly in Upper Egypt and the governorates of Sinai and Matrouh. This phenomenon appears to have changed after the 2011 revolution and the emergence of Islamist movements. It was only natural that the polarization and divisions that befell Egypt at that time would be reflected among tribes and families in a manner mirroring society as a whole. Recent activities by tribes indicate that they are preparing to contest parliamentary elections, due to be held March 22-23, in an organized and united fashion, mainly through so-called electoral colleges. Through these institutions, composed of prominent families, the family members vote for their preferred candidates. Whether they will remains a matter of speculation.

Egypt's tribes and families were traditionally subordinate to the ruling regimes, regardless of the latters’ orientation, for the sake of achieving mutual interests, primarily maintaining security, in exchange for influence. Parliamentary elections have therefore represented an opportunity for tribes to demonstrate their influence and superiority.

The 2011 elections resulted in divisions among tribes from the same villages and towns. During this period, the Muslim Brotherhood succeeded in persuading small and marginalized families to push candidates from them to run in the elections. These candidates then ran as affiliated with the Brotherhood or with other religious currents such as the Salafist Nour Party.

Some tribes appear to be seeking to bolster their cohesion, as evident by the conferences, or gatherings, they are holding to promote awareness and the importance of elections as well as to announce their candidates. They are also seeking to strengthen electoral alliances with political parties. This raises the question of the nature of tribal alliances in the upcoming parliamentary elections and whether they will allow the return of the tribes’ influence.

Wael Zakaria, a member of parliament from 2000 to 2010 and a candidate in the elections from the Mataaneh tribe, spoke to Al-Monitor about the backing of his candidacy by constituents of Luxor's Isna district in keeping with a tradition dating to 1923, when his family began passing down parliamentary seats from father to son. Zakaria attributes the people’s backing to their fondness for him and his family and their appreciation for the services he has provided to the district’s constituents.

Zakaria has joined the Free Egyptian Party’s list for the elections. He explained his decision, stating, “In their [the Free Egyptian Party] rhetoric and programs, they have been more honest than other parties who approached me.” On the other hand, Zakaria claims his honorable track record and integrity are the reason the party chose him. In the 2011 elections, Zakaria had failed to win a parliamentary seat, blaming it on his being part of the Freedom Party’s list, which sounds similar to the Islamist Freedom and Justice Party, possibly leading some voters to think he represented the Muslim Brotherhood.

Zakaria said, “A change occurred in Egypt after Jan. 25, as a result of the youths’ desire for change.” He stressed that the Muslim Brotherhood had been able to infiltrate family and tribal ranks in the revolution's aftermath and win voter sympathy in the name of religion.

With the election campaign marathon underway, and candidates competing for spots on the various electoral lists, professor Abu Alfadel al-Isnawi, a researcher specializing in Sufism and tribal affairs at Egypt’s al-Ahram Institute, thinks the tribes might not be able to form electoral lists on their own. He said, “Tribes cannot form lists considering that lists now [cover large areas, for example] from the Aswan governorate to Giza according to the new electoral law.”

He also noted the fragmentation that befell the tribes after the revolution, particularly in light of what he called the “tribe commitment” to back a single candidate. Isnawi added, “Families are built around two constructs: being part of the ruling system, with a parliamentary seat fulfilling that task, and services, whereby families vote for whomever is in power in exchange for services provided by the latter.”

Isnawi contends that it is at the services level that the Muslim Brotherhood succeeded in enticing families, and he believes that the tribe commitment experienced a resurgence after the June 30 revolution in 2013, albeit to a lesser extent. He also thinks that the tribes are better able to effectively mobilize for elections, contrary to the political parties, which are bickering. He said, “Tribes are effectively readying for the elections by organizing conferences.”

According to him, tribal candidacies will prevail in the upcoming elections. “Most partisan candidates hail from the tribes and families of Egypt’s governorates, as well as independent candidates. Thus, the upcoming elections will witness a competition between families and another between tribes,” he said. He also pointed to the existence of family competition in Cairo governorates, such as in the Old Egypt and Manshiet Nasser neighborhoods, as well as the Helwan and Fayoum governorates, although to a lesser extent than in Upper Egypt.

Isnawi noted the past existence of a “symbiotic relationship between the state and the tribes, through the Interior Ministry, which appointed mayors and elders, in exchange for help in maintaining security.” In addition, families controlled elected popular councils and received the largest number of appointments to executive committees and various state agencies, among them the judiciary, prosecutors' offices, the police force and the army, which Isnawi described as “internal infiltration.” He also found it unlikely that revolutionary forces from within the tribes would succeed in the parliamentary elections, unless the candidates were members of the largest families.

Problems and conflicts between tribes and within a tribe always surface during parliamentary elections. In this context, Sheikh Ahmad al-Idrissi, supreme elder of the Idrisid Ahmadiyya sect and a prominent mediator between tribes (including the Nubians and al-Halayel in Aswan governorate), said that his mediation raises the level of accord between tribes and within the same tribe in identifying the best candidate to vote for or in selecting a candidate from among them to run. “But, in times of conflict, discord increases between tribes concerning the identity of candidates, who, in the end, are chosen for personal reasons and not on the basis of merit,” he said.

Idrissi holds that the tribe is the natural nucleus of society and is the archetypal "party" that remains cohesive despite whatever difficulties arise. He said that the tribes of Upper Egypt, Mersa Matruh and Sinai do not tend to unravel, contrary to those in the Delta and Lower Egypt.

The growing level of political awareness among Egyptians, with political participation increasingly on the rise since the Jan. 25 revolution, led to the emergence of new parties that do not rely on tribes and families, especially since the latter tend toward an individual system in their support to a candidate who represents them.