Foreign Minister Mohammad Javad Zarif is under fire in Iran for his public walk in Geneva with US Secretary of State John Kerry. 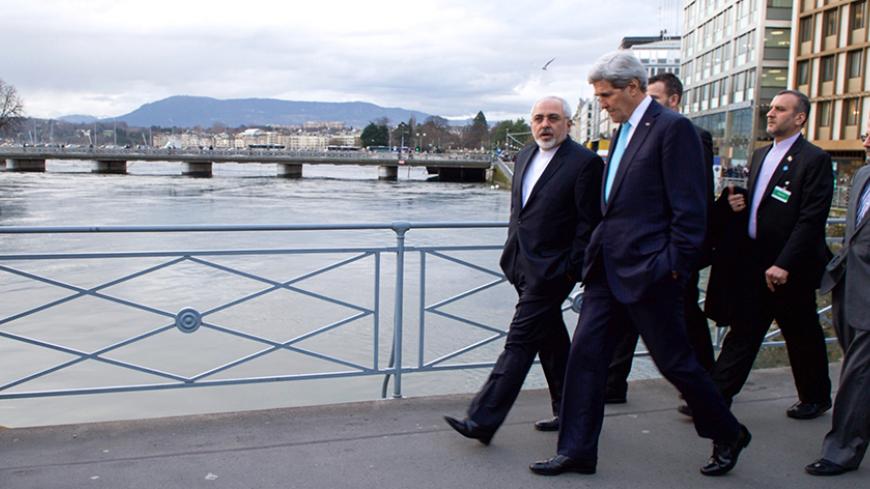 U.S. Secretary of State John Kerry and Iranian Foreign Minister Javad Zarif cross the Rhone River on the Pont de la Machine Bridge while taking a walk in Geneva, Switzerland, during a break in the negotiations about the future of Iran's nuclear program, Jan. 14, 2015. - US State Department
Arash Karami
@@thekarami
January 22, 2015

Iran’s Foreign Minister Mohammad Javad Zarif defended his 15-minute walk with US Secretary of State John Kerry during the nuclear negotiations in Geneva on Jan. 14. Pictures showing the two walking along the Rhone River became popular on social media. Many were surprised to see the foreign secretaries of these two nations taking a public walk and speaking so casually.

While riding a Tehran metro on Jan. 19 as part of a government effort to promote public transportation and reduce pollution, Zarif dismissed criticism of his walk with Kerry, saying that his critics “want to use it as a partisan issue.” Zarif said that the negotiations in Geneva were intense, and the two decided to step out for fresh air as the hotel did not have a garden. He added that the act was “natural,” given the long hours of the meetings with no breaks other than for prayers.

To his critics, Zarif said, “I’ve said many times that the negotiations are a national movement, not a partisan movement,” adding, “I expect our friends not to sacrifice national interests for partisan considerations.”

Iranian critics of Zarif’s walk with Kerry were not placated by Zarif’s response. The harshest statements came from the head of Basij Organization Mohammad Reza Naghdi, who said, “Showing intimacy with the enemy of humanity is completely wrong.” He added, “Zarif walking with the US secretary of state was trampling the blood of martyrs.”

Naghdi also criticized Zarif for showing up to Paris the same day that French prime minister held up the Charlie Hebdo magazine cover that depicted the Prophet Muhammad. Naghdi said it showed that Zarif “doesn’t know which people he’s representing” and “He’s undermining his ability to defend the rights of Iran with these types of actions.”

Zarif had defended his Paris trip, saying that he believes Iran’s foreign policy should be active and the country should have a presence everywhere to present its positions in a clear way.

Despite Zarif’s efforts, members of parliament are threatening to summon him to answer their questions in person about the walk with Kerry and his trip to France.

Javad Karimi-Ghodousi said that Zarif did not go on the walk out “out of carelessness” but did it intentionally “for domestic public opinion,” adding that “this was not the first nor the last” of these types of actions.

Karimi-Ghodousi said that Western countries want Iran to be part of a global system so that when situations such as insults to the Prophet Muhammad happen, Iran will show indifference. He said that Zarif goin to Paris during the peak of the Charlie Hebdo events could send no other message than that Iran wants to cooperate with a “domineering system and the West.”

Mohammad Bagher Nobakht, spokesman for the Iranian administration, dismissed the criticism, saying, “It is weak-minded to think of the walk with Zarif and Kerry as weak diplomacy.”