In the war against the Islamic State, the key issue is how to translate recent optimism on the strategic picture into tactical achievements on the ground. 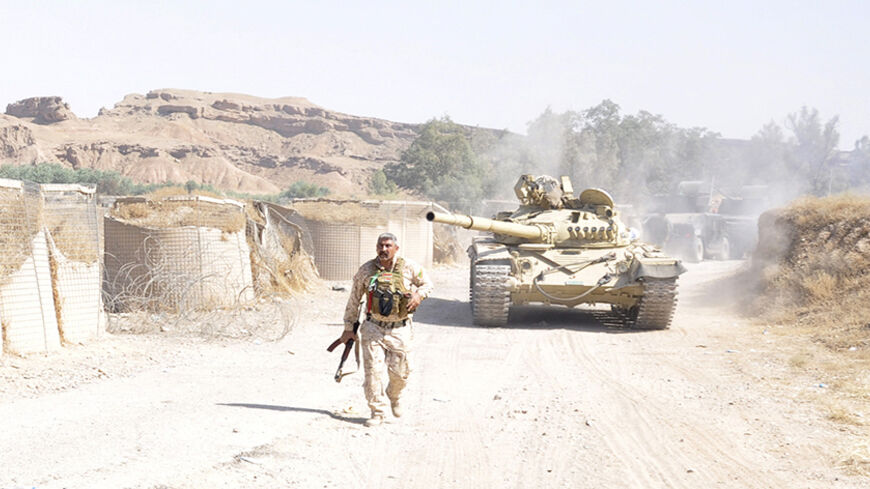 A tank accompanies Iraqi security forces patrol after clashes with militants of the Islamic State in Diyala province, July 16, 2014. - REUTERS

Looking back on 2014, there is no doubt it was the year of the self-proclaimed Islamic State (IS) occupying parts of Syria and Iraq.

In recent days, Western media have increasingly reported that IS is unable to sustain its May-August blitzkrieg and that this may well be the beginning of the end for the group. Reporters say that IS has lost its initial popularity, that its power on the ground is waning, that combat with IS has reached a military stalemate and that, this time, it's the coalition’s turn. Improved Iraqi security forces are pushing back IS fighters, they report, and some analysts have even developed scenarios for the post-IS period.

But it's a tricky thing to measure the demise of the group. How can one know IS is losing? What military metric should we use? Is IS still growing, or can we assume that its collapse has already begun?

Of course, certain indicators justify this optimistic picture. In particular, IS' inability to capture new territory since September 2014; their setbacks in Sinjar against the peshmerga; their failure to capture Kobani, which IS initially saw as easy prey; severe restraints on IS fighters’ mobility due to coalition air attacks; the fading influence of their professional (and savage) media; and decreasing oil prices, which appear to have struck a blow to their financial resources.

Moreover, it is becoming increasingly clear that IS is having problems translating its military achievements to the realm of governance, especially in providing social services. News reports have stated that IS has been unable to maintain contact with opposition groups in Syria and Iraq, and that it is clashing with Islamist groups unwilling to submit to its authority.

It may be time then to implement those strategic plans offered earlier by some analysts. Two prominent alternatives are currently on the market. The first calls for a high profile on the ground and is probably best represented by Council on Foreign Relations Senior Fellow Max Boot. According to Foreign Affairs, Boot "calls for the deployment of up to 30,000 US ground combat troops, a US-enforced no-fly zone and incentives to enlist Turkey as an active military partner in the fight — all in order to push the Kurds, the Shia-dominated Iraqi security forces, and Sunnis to work together to roll back ISIS from its strongholds in Iraq and Syria." The second alternative — maintaining a low profile on the ground — is advanced by US Air Force Lt. Gen. David Deptula. According to this argument, the coalition would engage in high-precision airstrikes against IS' leadership and its economic and military centers of gravity to weaken the group. It would then deploy special forces to help Sunni insurgencies in their fight against IS.

But is this recent emergence of strategic optimism enough to back up the claim that IS has begun losing the war? Is it time to implement one of these plans to deal the final blow? In Syria and Iraq, strategy and tactics are diverging. In that sense, Iraq and Syria today represent the direct opposite of what we see in Afghanistan. The 13-year International Security Assistance Force alliance in Afghanistan was an absolute victory in tactical terms (at battalion and lower levels), as international coalition soldiers did not lose a battle against the Taliban or retreat from it. At the same time, it was a disappointing story on the strategic level. What we see in the military struggle against IS in Syria and Iraq is just the opposite of the military picture in Afghanistan; that is, the coalition against IS has not achieved a single tactical success on the ground, but it has succeeded in spurring optimism in the minds of its international audience.

Because of this growing divergence between the tactical picture on the ground and the strategic narratives published in newspapers, it may not be so easy to determine whether IS is currently winning or losing. When there is no tactical military force to stop IS, let alone push it back, the most we can claim is cautious — at times, blurry — optimism.

Perhaps the strategic picture may seem overly optimistic because we simply want to see it that way. We should note that IS is a bottom-up organization in military and bureaucratic terms, which means that we should revise our strategic thinking. Maybe we should take as our center of gravity the local, tactical picture, rather than the strategic level. To reformulate: The nature and characteristics of local dynamics between the Sunni tribes and IS in the 17 Tammoz district of Mosul is much more significant than the coalition’s strategic airstrikes for determining the end state in this “bottom-up” struggle. We are required to analyze developments regarding IS according to local dynamics that shape the tactical picture in each and every city under IS control. Focusing on the tactical picture on the ground could provide a more accurate picture as to where the military struggle is heading, rather than the strategic one. Unfortunately, however, Western decision-makers seem to base their plans on a "one size fits all" strategic template in a top-down manner, hoping that this template will work effectively in all cities under IS control.

To defeat IS, we do not need a single sweeping strategic plan, but instead a compilation of various tactical plans that take into account the local dynamics of cities under IS control. To see IS as a monolithic and homogenous group and to implement a "one size fits all" strategic plan in a top-down fashion would be a gross mistake. The tactical picture of IS in Mosul and Raqqa is different. Pillars of a successful military plan tailored for Mosul cannot be the same as the one for Raqqa. When tailoring a military plan to defeat IS, the basic unit of analysis should be the cities under its control, and the strategic planners should provide enough room for tactical diversity. For example, ignoring certain factors — like the growing Sunni Arab and Kurdish tension in Mosul; the influence of Turkey in Aleppo; growing Alawite discontent in Raqqa; and the Arab-Turkmen alliance that is becoming an anti-Kurdish bloc in Kirkuk — would only serve IS.

In short, without properly analyzing IS performance in the 17 Tammoz and Mshrefa neighborhoods of Mosul, one cannot understand what is happening in Iraq and Syria. Developing a single strategic military plan omitting the tactical picture shaped by the local dynamics of each and every city would be a misguided approach.

Turning to the question of whether IS is losing today, one must be cautiously optimistic. Only when one reads about the appearance of bottom-up plans tailored to tactical peculiarities in IS-controlled cities can one be more optimistic and suggest that IS' real defeat on the ground has begun.