Political missteps in Libya cause Turkey's economy to stumble

Turkish President Recep Tayyip Erdogan and the AKP government's backing of the Muslim Brotherhood in Libya is inflicting billions of dollars of economic losses on Turkey and eroding its political influence in Libya and Saharan Africa. 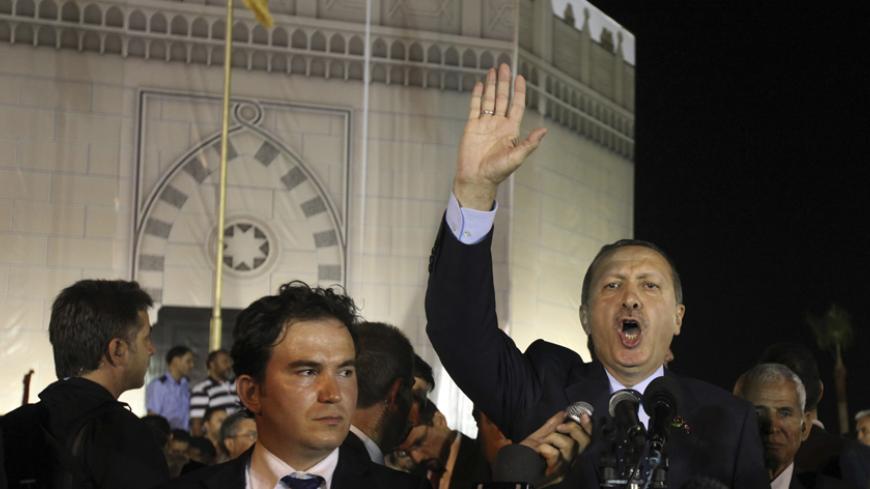 Turkey is on the verge of losing Libya after Egypt. We are facing dwindling access to North Africa and Saharan Africa.

How can we forget Recep Tayyip Erdogan, the prime minister of a NATO member, reacting to NATO plans to intervene in Libya with, “What does NATO have to do in Libya?” But Erdogan quickly reversed himself and became a supporter of the NATO operation and embraced the opposition of Libyan ruler Moammar Gadhafi, who had not long before awarded him the “Gadhafi Prize for Human Rights."

Hundreds of wounded rebels were evacuated to Turkey for treatment. Leaders of the Libyan transitional administration led by Mustafa Abduljalil were received with open arms in Ankara. But the Turkey that extended all kinds of support to the rebels and spent millions of dollars on them is not wanted in Libya.

Libya-Turkey relations have had ups and downs since 1972. After the United States clamped an arms embargo on Turkey in the 1974 Cyprus Operation, support for Turkish armed forces, from spare airplane parts to fuel, had come from Libya.

It was Turkish companies and contractors that provided the most input to the reconstruction of Libya, which is now seen as a failed state. Turkish contractors acquired experience in Libya and grew, expanding their horizons. Turkey became the No. 2 contracting country in the world after China in 2014. Projects worth $28 billion that Turkish companies executed in Libya contributed significantly to Turkey’s economy, in particular to its contracting sector.

But diplomatic, political and strategic mistakes by Erdogan and his Foreign Minister Ahmet Davutoglu during the toppling of Gadhafi and its aftermath created serious problems for Turkey and its hundreds of contracting companies, while risking access to the sub-Sahara African market for which Turkey had serious hopes.

Just as Turkey-Egypt relations sank over support by the Turkish government to Egyptian President Mohammed Morsi and the Muslim Brotherhood, the same scenario is playing out in Libya. Libya’s failure to achieve political and economic stability, its incessant civil war, intertribal rivalries and competing governments only expand the crisis.

The National Congress Parliament and transitional government established in Tripoli in 2011 were dominated by Islamists and pro-Sharia elements. Under the new election law, 25% of Libyans voted in the June 25 elections. But after the election board nullified some votes on charges of fraud, this figure went down to 15%.

The parliament at Tobruk formed after the election was largely made up of secularists and retired Gen. Khalifa Hifter, who announced a war on radical Islamic terrorism.

The Libyan High Court, which functions as the Constitutional Court, declared the Tobruk parliament elected by a 15% vote was not legitimate and decided the former parliament in Tripoli remained legitimate. It will be difficult to achieve stability in a Libya with two parliaments, two governments and two capitals, and Turkey’s losses there will continue to mount.

In the beginning, Turkey did not recognize the Tobruk parliament and administration, which was recognized by the UN Security Council, the United States and EU countries, Egypt, Saudi Arabia and the United Arab Emirates. The Libyan Foreign Ministry interpreted Erdogan’s comment, “It is not possible to accept the assembling of the Libyan parliament at Tobruk,” as interference in Libya’s internal affairs and recalled its ambassador from Ankara.

When Erdogan reacted to the electoral loss by segments closer to Turkey, relations with Libya became even more tense. Erdogan, and therefore Turkey, adopted the political outlook of the Muslim Brotherhood in the Misrata region. There is no doubt that its policy of supporting Sunni Islamist politicians and the Brotherhood cost Turkey heavily in Libya. When the Tobruk government declared that Turkish citizens in Libya should leave Libya because of Ankara’s policy, it appeared to be a rupture of diplomatic ties, and Turkey had to close down its embassy in Libya in July.

The assessments of experienced Turkish businessmen and contractors speaking to Al-Monitor conclude that Turkey’s decision to support the Misrata Group (Muslim Brotherhood) and the Tripoli parliament — unlike key Arab and Western countries and the UN, which recognized the Tobruk parliament — caused severe resentment against Turkey and Turks. For the parliament and government in Tobruk, Turkey doesn’t count. Egypt’s political and military influence in Libya is growing. Algeria and Egypt are acting jointly against the radical Islamists.

Turkey, however, is betting on the Muslim Brotherhood as it did in Egypt, playing a losing hand. There has finally been some realization that Turkey was on the wrong course, and we were trying to have relations with both parties, but it is too late. Turkey is losing Libya. It is Egypt that counts in Libya now, with no more mention of Turkey. The machinery, work sites and assets of hundreds of Turkish firms were set afire and looted. They are owed $5 billion, but as there is no political authority or working administration, we are not paid. We had to repatriate thousands of our workers.

The Egyptian government, in a serious struggle against the Muslim Brotherhood, has expanded its efforts to prevent the empowerment of Islamists and to degrade Turkey’s position in Libya.

Libya’s only source of revenue in this chaotic environment is oil sales. Revenues are deposited in the Libyan Central Bank. The Central Bank, which doesn’t recognize either of the governments in Tobruk and Tripoli, decides by itself who gets paid. But the monies owed to Turkish companies are not on the list of pending reimbursements to be made by the Central Bank.

The Ankara government is finally seeming to notice that it has been betting on the wrong horse. Former Deputy Prime Minister Emrullah Isler was sent to Libya as special envoy of Erdogan and Davutoglu. He met with both governments and offered to mediate. Although our Foreign Ministry keeps saying “Our relations with Libya are excellent,” the current picture is that Turkey has not only lost Libya politically, but also billions of dollars.