Turkish officials say Turkey is doing its best to prevent crossings into and out of Syria by Islamic militants, blaming European countries for not furnishing useful intelligence. 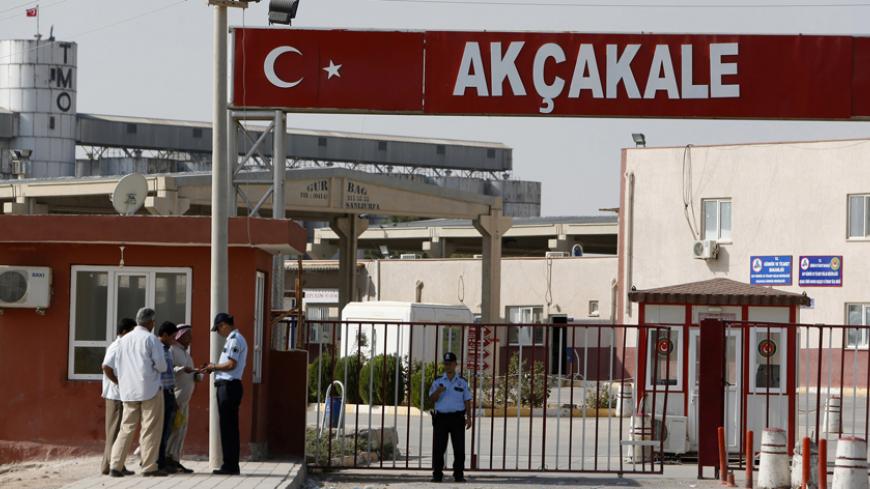 A Turkish police officer checks the identification cards of Syrian men after they crossed from Syria to Turkey at the Akcakale border gate, southern Sanliurfa province, Oct. 4, 2012. - REUTERS/Murad Sezer

Hayat Boumeddiene, the female terror suspect sought by the French police, was found to have entered Turkey shortly before the Paris attacks and traveled from there to Syria, raising questions about whether Ankara is doing enough to fight groups like the Islamic State (IS).

Prime Minister Ahmet Davutoglu and government officials remain highly defensive on this topic, saying Turkey is doing more than its share, given the odds it faces. They blame Western countries in turn for not cooperating sufficiently by providing timely intelligence that could prevent such attacks.

The situation is a complicated one for Ankara, as tens of millions of foreigners enter Turkey every year. It is also problematic to monitor a border with Syria that is almost 900 kilometers (560 miles) long. The usual, and not entirely unjustified, example given by Turkish officials in this case is the US-Mexican border, which remains porous despite all the hi-tech precautions that have been taken. The problem is also aggravated by suspicions aired in Turkey concerning he country’s vast bureaucratic apparatus, which contains officials sympathetic to radical Islamic groups.

Davutoglu was angered during a Jan. 12 press conference in Berlin, following talks with German Chancellor Angela Merkel, when asked if Turkey was doing enough to secure its borders.

“Is it Turkey’s fault that is has a border with Syria?” Davutoglu retorted, going on to explain that 35 million tourists visit Turkey every year. “We cannot treat people as terrorists by merely looking at their names. We have to be given intelligence.”

Pointing out that Boumeddiene was found to have entered Turkey from Madrid, he asked if Spain should also be accused. “We are ready for all forms of cooperation in the field of intelligence — 7,000 people have been prevented from crossing our borders on the basis of information provided; 1,500-2,000 people were also sent back to European countries.” Davutoglu said.

Davutoglu said Turkey could close its borders with Syria, which would also prevent the crossing of refugees fleeing oppression by the Syrian regime. But, he said, the blame for the refugees’ fate would be on those who forced Turkey to do this.

Davutoglu got support from Merkel during their joint press conference when she also underlined the importance of intelligence sharing and said Germany was cooperating closely with Turkey in this regard.

“We may have differences of opinion, but we are acting together with Turkey on the subject of security. We stand shoulder to shoulder, especially on the topic of terrorism,” said Merkel. Not everyone on the German side, however, appears convinced.

Hans-Georg Maassen, Germany's domestic intelligence chief, told the German TV station ARD while Davutoglu was in Berlin that Turkey had to do more to prevent illegal crossings into Syria. Various French officials talking to the media after the Paris attacks have also highlighted the need for Turkey to do more in this respect.

However, assistant professor Giray Sadik of Yildirim Beyazit University in Ankara, an expert on security issues, is among those who believe European countries are not cooperating sufficiently with Turkey on this issue.

“Turkish authorities are probably doing much more than we see. But there has to be intelligence sharing that is also timely enough to be effective,” Sadik told Al-Monitor.

He recalled that French security had reportedly prevented four attacks prior to last week’s, even though the public was not aware of this at the time. Sadik added that the West could also help Turkey by backing Ankara’s proposal for a safe haven or buffer zone for refugees on the Syrian side of the border.

“Militants can hide themselves among refugees, so a zone like this would enable the authorities to secure the safety of the refugees while getting a better chance to monitor the identities of individuals passing in and out of Turkey,” he said.

Turkish media outlets have cited information obtained from security sources indicating that the names of only 7,800 of the estimated 15,000 IS militants in Syria are known by security officials in Turkey.

Boumeddiene, like thousands of others, reportedly entered Turkey as a tourist Jan. 2, and since her name was not on the watch list of 500 people furnished by France, Turkish authorities had no reason to stop her.

Turkish security officials reportedly conducted their own investigation as soon as the names of the Paris attackers were made public, and immediately provided the information to their French counterparts, even before being asked to do so.

Reportedly, French police had insisted, for eight hours after Paris was informed that Boumeddiene had entered Turkey on Jan. 2 and had no record of leaving the country, that she was in the kosher supermarket in Paris with her boyfriend, Amedy Coulibaly, who was holding a large number of people hostage.

Monitoring her cell phone conversations, security officials established that Boumeddiene had crossed into Syria on Jan. 8, near the town of Akcakale, a region where tens of thousands of Syrian refugees have crossed into Turkey and continue to do so.

This, however, is the point where many argue Turkey could have been much more vigilant, given that the places of illegal crossings are generally known to the authorities. There are also allegations in Turkey that there are officials sympathetic toward the Islamic militants and facilitating these passages.

The main opposition Republican People’s Party (CHP) submitted a parliamentary query this week, to be answered by Davutoglu, concerning a female suicide bomber ­— later named as Diana Ramazova — who blew herself up on Jan. 6 at a police station in Istanbul’s Sultanahmet district, killing a policeman on duty.

The CHP demanded clarification about claims that Ramazova had crossed into Syria, via the town of Kilis, at least twice over the past six months with a Turkish diplomatic passport.

Interior Minister Efkan Ala told reporters Jan. 12 that no information was available to corroborate these claims. The CHP’s query has, however, to be answered officially and in detail in parliament by the government.

Sadik told Al-Monitor that it is obvious from the activity in some regions in Turkey bordering Syria that there are Turkish sympathizers of radical groups. “It is significant that there is an accumulation on the Turkish border with regard to these passages,” he said. “But this should not be taken in any way to mean that Turkey is giving a green light to this.”

Sadik recalled that a noncommissioned officer on guard duty on the Syria border, in a spot traditionally favored by smugglers, was recently kidnapped and held in Syria for reportedly trying to prevent illegal passages. The officer was later released following an operation by special forces working with Turkish intelligence.

Sadik, nevertheless, believes that the government could be doing more to counter allegations that radical Islamic militants may be getting assistance from friendly officials or other sources in Turkey.

Turkey will attend the terrorism summit in Washington on Feb. 18, when these topics will be discussed in detail. The sense of urgency following the Paris attacks is expected to lead to increased cooperation between Ankara and its Western allies, given that the threat is increasingly perceived as a common one.