Many questions still surround the recent suicide bombing in Istanbul, but it nevertheless points up Turkey's limited understanding of IS and the country's need to develop a strategy and assets to deal with terrorism. 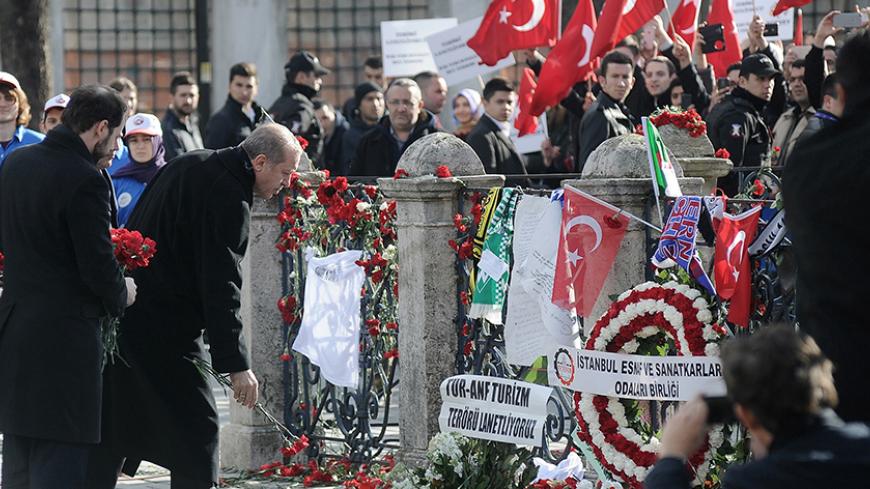 The Jan. 12 suicide attack on Istanbul’s tourism center of Sultanahmet Square starkly illustrates how Turkey's preoccupation with other battles has dangerously shifted its radar away from the Islamic State (IS). The attack, which targeted a foreign tourist group, killed 10 people and wounded 15 others. Most of the victims were German.

Speaking that day, Turkish President Recep Tayyip Erdogan said, "I strongly condemn the suicide bombing originating from Syria." The Justice and Development Party (AKP) government’s deputy Prime Minister Numan Kurtulmus first said the suicide bomber was a Syrian born in 1988. One hour later, the identity of the suicide bomber was revealed as Syrian Nabil Fadli and reports said he was born in Saudi Arabia.

There were three IS-related suicide bombing attacks in Turkey during 2015: in Sultanahmet last January, in Suruc in July and in Ankara in October. But there are major differences between those attacks and the recent Sultanahmet bombing.

First, one striking difference is that the bomber and all of the victims of the Jan. 12 attack were not Turks. This raises the question of whether IS — which is now on the defensive in Iraq and Syria — wants to shift its battlefield in part to Turkey. If IS is trying to ease the pressure it is under in Syria and Iraq by spreading its activity to Turkey, then similar operations are to be expected.

Another difference of the Jan. 12 bombing was that, while it appears to have been inspired by IS, it has not been definitely linked to the group. The 2015 attacks were blamed on local IS cells in Diyarbakir and Bitlis, and particularly on the IS "Dokumacilar network" based in Adiyaman in southeast Turkey.

In those attacks, authorities not only were able to establish the bombers' passages to Syria, but their roles in IS and Turkey were clearly exposed. But the background and IS connections of Nabil Fadli, identified as the perpetrator in the latest attack, remain a puzzle.

Security sources Al-Monitor spoke to said Fadli was not on the list of people monitored by Turkish intelligence or the list of potential suicide bombers. Moreover, there is no information on his contacts with IS. It is even possible that Nabil Fadli was a false name used to conceal his identity. That may explain why German Interior Minister Thomas de Maiziere, who was in Turkey a day after the attack, appeared dissatisfied with the information he was given, saying the bomber's identity was not clearly established.

Security sources said they are trying to reach the family members of Fadli and conduct DNA investigations to determine his true identity.

Media reports said the bomber so far identified as Fadli entered Turkey illegally from Syria to the border cities of Kilis and Gaziantep. He then went to Ankara, where he stayed three or four days before moving to Istanbul. From there, he is said to have traveled with four other people to the Zeyntinburnu office of the Immigration General Directorate on Jan. 5 to identify himself as a refugee. He said many of his family members had been killed in an IS assault in Syria, and his intention was to go Europe.

The question that certainly needs an answer is why a person who came to Turkey for a suicide bombing operation would go to an official agency to offer his fingerprints. Is there any proof, apart from his statement, that he was actually a Syrian? Which IS cells in Turkey was he in touch with? Since there are no answers to these vital questions, the Sultanahmet bomber is still a ghost. With the dense fog over the affair, the Sultanahmet attack is not yet fully attributed to IS but is instead categorized as an IS-inspired attack.

The third feature of this attack that sets it apart from earlier ones is seen in the technical details. Bombs used in the Suruc and Ankara bombings were professional, manufactured systems with electrical detonators.

Eyewitnesses at Sultanahmet on Jan. 12 said the bomber pulled out the pin of a hand grenade and the blast followed three to four seconds later. That is why the casualty toll was minimized; some tourists noticed him and shouted warnings.

The bombing shows how Turkey's polarized society has lost its understanding of IS.

According to pro-government sources, the bomber "was a spearhead of [IS] or a Russian tool or a subcontractor of the Assad regime and Iran in Turkey." According to supporters of the Kurdistan Workers Party (PKK), it was the work of a "deep state mechanism" that serves the political agenda of Erdogan and his AKP with such IS operations. Opposition parties say the national intelligence service MIT was responsible because of its incompetence.

The Jan. 12 attack demonstrated once again how Turkey’s misperception of the bombers as merely "IS subcontractors" has resulted in two fatal mistakes. First, such a misguided approach leads political decision-makers and society to ignore the substance of the problem. Second, it encourages Turkey to ease up on its struggle against IS.

Sterile political arguments following the attack point to some basic realities we have to bear in mind. Such debates don’t allow room to deal with structural needs such as developing an integrated and comprehensive combat strategy against IS; reinforcing border security; addressing deficiencies in the Turkish legal system, which still doesn’t identify IS as a terror organization; and clearing the intelligence fog over IS.

By prioritizing its struggle with the PKK, Turkey automatically pushed combat with IS to the back burner — hence, the lack of field capacity and strategy to deal with IS.