Turkish President Recep Tayyip Erdogan, whose aspirations for regional leadership have failed, has begun trying to acquire leadership of the Islamic world on his Africa tour. 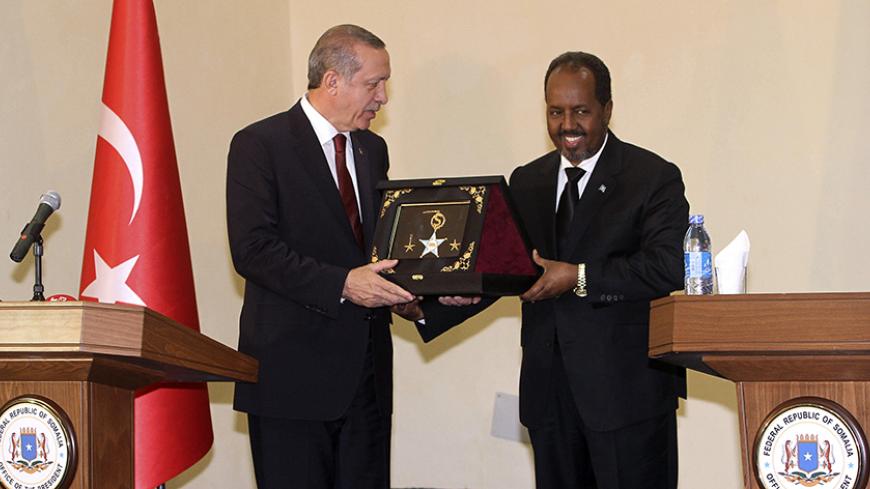 Just as Kurds were jubilantly celebrating the end of the Islamic State (IS) siege of Kobani, a city that President Recep Tayyip Erdogan declared on Oct. 7 to be on the verge of falling, another part of the world — the Horn of Africa countries and especially Somalia — were witnessing a show put on by Turks playing for the leadership of the Muslim world.

Erdogan, who started his Africa tour from Ethiopia, interrupted it for a short while to attend the funeral of Saudi King Abdullah bin Abdulaziz, and then resumed it with visits to Djibouti and Somalia.

Erdogan, who had made history on Aug. 19, 2011, as the first nonregional leader to visit Somalia in 22 years, was greeted with joy by Somalis on his second visit on Jan. 25.

During his Mogadishu visit, Erdogan participated in the opening of the new terminal built by Turkish contractors at Mogadishu's Aden Adde International Airport and in the inauguration of the 200-bed hospital built by the Economic and Coordination Agency of Turkey. Turkey will provide the hospital with specialized personnel and financial support for the next five years. Erdogan promised construction of 10,000 dwellings in Mogadishu. Turkish Airlines, which has been flying regularly to Somalia since 2012, announced it would increase its flights to daily.

Abdurrahman Omar Osman, the former information minister of Somalia, speaking to BBC World Service on Jan. 26, expressed gratitude to Erdogan. When asked why the Turkish president was so concerned with Somalia, Osman said: “He wants to be the leader of the Islamic world.”

While he is at loggerheads with his neighbors and nearby countries, can Erdogan really lay claim to leadership of the Muslim world from faraway lands? Erdogan, who assumed the role of protector of the oppressed Muslim world, sent this message to the Kurds celebrating the liberation of Rojava: “We don’t want the birth of Northern Syria.” How can he be a leader who can’t share the joy of Kurds freed from IS and who still keeps alive his plans to eradicate the gains of an oppressed people?

If Erdogan had embraced the Syrian Kurds who, when they took control of their region having been assuring Turkey since July 2012 of their good neighborliness, he might have gotten something concrete to contribute to his claim to leadership of the Muslim world. But Erdogan excitedly waited to hear about IS eliminating the Kurdish resistance.

Everyone is wondering about Erdogan’s decision to risk becoming a target of al-Shabab (also known as al-Qaeda in Somalia) and go to Somalia. Turkey’s opening to the continent by declaring 2005 the Year of Africa and increasing the number of its embassies from 12 to 35 is not confined to Somalia.

Erdogan is planning to visit nine more African countries in three phases. But Turkey’s faltering in its close vicinity, with the reversal of opportunities offered by the Arab Spring, is bound to affect aspirations of its Africa opening. When Erdogan’s dream of becoming the big brother of the Muslim world via Syria did not materialize, Erdogan opted for more untouched regions. He doesn’t have too many impediments in Africa. Erdogan is no longer a leader excitedly awaited in the capitals of the region, be it the impossible Damascus, a Cairo that closed its doors on Turkey and others such as Baghdad, Beirut and Amman. That makes it more sensible to go to Africa to win hearts and minds with humanitarian assistance.

But there is a danger of this humanitarian concern and assistance. After a while Erdogan cannot resist the temptation to interfere in domestic affairs of countries he sets up good relations with. Turkey can easily become a party to internal account-settling as we did in Syria and Iraq. Yes, there are many grateful Somalis shown on TV screens, but there are also those who are not sure that Erdogan will not try to translate his humanitarian effectiveness into politics. Fortunately, nobody wants to talk about this when humanitarian assistance is ongoing.

Actually, if we hadn’t had that obsession of taking over as the leader of the Muslim world and hadn’t subscribed to incredible conspiracy theories that former colonial powers were scheming to disrupt Turkey’s Africa opening, it would be easy to say that Turkey has done some good work in Somalia. Humanitarian assistance such as food and medicine; building schools, a hospital and roads; repairing airports and the seaport all win the hearts of the Somalis. This mobilization is not only by public agencies. Long before official agencies, Turkey’s civil society had done plenty in Somalia. Somalis show their gratitude at every opportunity including by naming their newborn boys Erdogan and girls Istanbul.

Strangely, the Turkish government, instead of benefiting from these openings provided by humanitarian assistance and building a network of robust relations, prefers to make fuss. Erdogan sees himself in competition with Britain and France. Erdogan mocks the British for having their embassy work out of containers at Mogadishu airport. Erdogan referred to the International Somalia Conference held in London on Feb. 21, 2012, saying: “Some people are disturbed by our close interest in Somalia. We came and became friendly. Immediately thereafter, Britain organized the conference. Instead of organizing a conference, why not come to Somalia? They are doing their embassy work in containers.”

Pro-government media merrily translate Erdogan’s frequent reference to “some people are disturbed by our Africa opening” remark to sensational conspiracies. For example, the pro-government daily Yeni Safak blamed Britain and Israel for the Jan. 22 suicide car bombing against a hotel with a large Turkish delegation in Mogadishu. Its headline was “Britain suspected of the attack” and subtitle was “Dirty Message.” Yeni Safak wrote: “It is well known that many countries led by Britain and Israel are concerned with Turkey’s success in humanitarian and political assistance that was pioneered by Erdogan. The attack yesterday was a message to Erdogan not to go to Somalia.”

The British Embassy responded with a Twitter message that said: “We are following with amazement the illogical allegations that link the United Kingdom to the attack and that we oppose Turkey’s interests in Somalia.” Al-Shabab’s reason to target the Turkish government is the support Turks are giving to the Somalia government.

Before this latest attack, the Turkish Embassy was the sole foreign diplomatic legation operating in Mogadishu. A Turkish Red Crescent convoy and students waiting in line for scholarship applications were targeted.

To look for foreign hands behind everything that happens in and out of the country has become an instinctive response by officials and pro-government media. In short, as long as the Africa Opening remains within a humanitarian framework, it is a heartwarming source of pride. The shadow on it is cast by our pursuit of regional and even global leadership.

Many wonder how Turkey can justify its goal for global mastery while its own problems of poverty, unjust distribution of income, injustice, nepotism, corruption and unlawfulness get worse by the day. It is therefore time to ask: “Can conquest of Somalia make up for the misery in our own streets? Who is going to take seriously the regional even global leadership narrative of a country with so deeply rooted internal contradictions?”