The revelation that official Turkish aid to Somalia was delivered in boxes full of cash has raised questions about Turkey’s Africa policies. 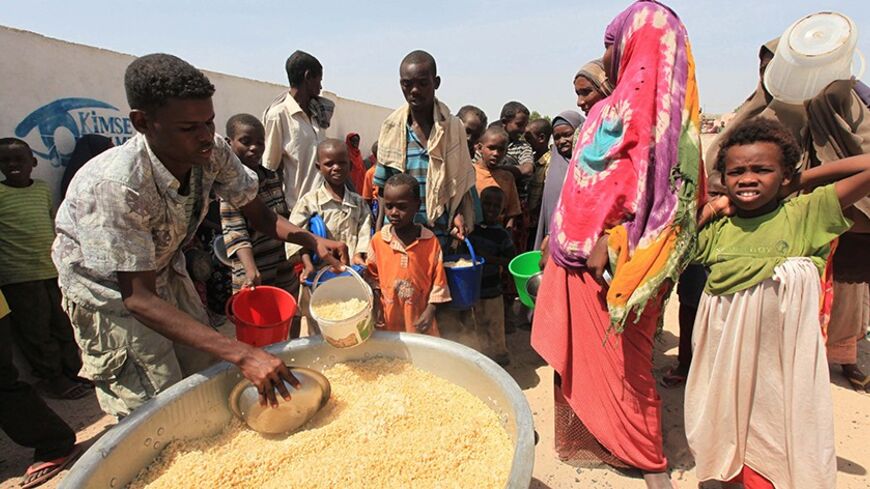 Displaced Somalis line up for food at a center run by a Turkish aid agency in southern Mogadishu, Jan. 22, 2012. - REUTERS/Feisal Omar

Somalia stands out among the countries where Turkey has sought to employ “soft power” as part of its “active” foreign policy. Public conscience is easy to mobilize for Somalia, a country that has become synonymous with hunger, and that is what Prime Minister Recep Tayyip Erdogan took advantage of on Aug. 19, 2011, when he landed in Mogadishu on a humanitarian aid mission as Turks back home resisted their own hunger during the Ramadan fast. The timing was poignant and coupled with intense publicity about Erdogan being the first foreign leader to visit Somalia in a number of years. Turkey’s Red Crescent and the Turkish Cooperation and Coordination Agency (TIKA), backed by a number of civil groups, embarked on such an extensive aid campaign that international actors could not help but wonder, “What are the Turks after?”

Today, Turkey’s high profile in Somalia is fading with an equally striking symbolism. Reuters reported on Feb. 14 that Ankara had cut its $4.5 million in monthly cash assistance to the Somali government at the end of 2013. Everyone’s attention turned, however, not to the aid cut itself, but to another detail in the story: The aid had been delivered to the Somalis by hand, in boxes of cash. The reason for this selective focus is obvious: The box emerged as the symbol of anti-government criticism in Turkey after Dec. 17, when police discovered millions of dollars stashed in shoe boxes in the home of Suleyman Aslan, the chief executive officer of Halkbank and one of the suspects arrested in the massive corruption probe targeting cabinet ministers.

Abdisalam Omer, former central bank governor in Somalia, told Reuters that he would go once a month to Turkey’s Mogadishu embassy to collect the $4.5 million in boxes full of cash. “It was always in $100 bills,” he said. Given that the Somali government’s 2014 budget stands at $218 million, the impact of Turkey's aid cut will be significant. Some $91 million of the country's budget is provided by foreign donors. Citing Turkish officials, Reuters said Ankara had no immediate plans to resume the payments. Nevertheless, Somali President Hassan Sheikh Mohamud could well count on Gulf money to make up for the gap. Unlike Turkey, the Gulf states are much more discrete in the assistance they provide.

A Turkish Foreign Ministry official contacted by Al-Monitor commented on the issue, stating, “The Reuters story is partially accurate. It’s true that Turkey provided direct cash assistance to Somalia and that this assistance was officially part of the budget. The aid was delivered in cash by hand because no banking services are available. The inaccurate element in the report is this: Turkey has not cut all assistance. Turkey will continue to provide technical support in 2014. Work is currently under way to outline the scope of technical assistance.”

Turkey's Foreign Ministry denied that it had stopped aid to Somalia over allegations of graft. It said in a statement that Turkey had sent cash to Somalia between June and December 2013 following a request from the Somali president for help with his country's budget deficit. Like the ministry official, the statement acknowledged the money was delivered in cash because the Somali banking system was not working.

According to Turkish officials, the direct assistance ended because the relevant agreement between the two countries expired. Yet other reasons come to mind. First, similar to the experience of Western governments, Turkey’s confidence in the Somali administration might have been shaken when Yussur Abrar, governor of the central bank, resigned after only seven weeks in the post, citing pressure on her to sign off on some dubious deals.

Second, Turkey extended support to the Somali government in a much more transparent manner than most other countries, and in doing so, attracted the ire of the Islamist al-Shabab group. A suicide bombing at the Turkish Embassy last July 27 claimed three lives, among them a Turkish policeman's, and left nine people wounded, including three other Turkish police officers. In claiming responsibility, al-Shabab accused Turkey of being among the countries that “support the apostate regime [in Somalia] and seek to suppress the Sharia order.”

That was not the first such attack. On April 15, five Somali relief workers had been killed and four Turks wounded when a Turkish Red Crescent convoy came under attack. On May 25, 2012, a Turkish businessman was murdered in a hotel in Mogadishu, and in October 2011, al-Shabab targeted public buildings in Mogadishu, killing 70 students waiting in line to receive the results of their Turkish scholarship applications.

Attracting too much attention

Africa analyst Rashid Abdi told Reuters that Somali’s Islamist president, Mohamud, could easily find another Middle Eastern partner to quietly extend his country support. He also made an interesting observation about Ankara: “Turkey, for all its faults, was pretty transparent in its budgetary support for Somalia compared to other Muslim countries."

Turkish government officials are inclined to explain al-Shabab’s attacks as the ploy of certain foreign powers disturbed by Turkey’s Africa opening. The argument is also endorsed by Serdar Cam, the head of TIKA, which has won kudos for its sustainable aid operations in the country.

In remarks to Al-Monitor, Cam said that proposed joint operations had been proposed by some countries that did not want to lag behind Turkey in providing assistance but had not been able to access certain areas due to security risks. TIKA, however, prefers to operate either on its own or in cooperation with other Turkish relief organizations, he said.

Cam proudly recounted his organization's Somalia operations, which extend beyond the delivery of hundreds of tons of humanitarian aid. “Animals would often turn up on the runway at Mogadishu’s airport in the past. We fenced and modernized the airport, making night flights possible. We have built a 23-kilometer [14-mile] asphalt road in the capital,” he said. “We are training Somalis how to cultivate their fertile lands, guided by the principle ‘to teach man to fish rather than to give him a fish.’ We have built a hospital with a 200-bed capacity. We have also set up a field hospital, where Turkish doctors examine 1,200 people per day. We have drilled scores of water wells. In Somaliland, we are involved also in the restoration of Ottoman era historic buildings.”

Besides TIKA, such public institutions as the Housing Development Administration, the Religious Affairs Directorate, Turkish Airlines and the Red Crescent have been involved in the effort in Somalia. Significant assistance has also been provided by civil groups, such as the Humanitarian Relief Foundation (IHH), Yeryüzü Doktorları (Doctors Worldwide), Kimse Yok Mu (Is Anybody There), Deniz Feneri (Lighthouse) and Sadakataşı (Charity Stone).

Cam underscored that Turkey’s aid to Somalia has been driven only by humanitarian concerns, with no ulterior motives in regard to the country’s rich underground resources. He conceded, however, that the delivery of humanitarian assistance was potentially opening trade and investment channels for Turkish business people.

The primary factor that could potentially snag Turkey’s much-praised humanitarian operations in the region is a relapse in its “political ambitions” over time. Existing or potential perceptions that Turkey gets involved in domestic political calculations in the countries it assists arouse certain sensitivities. Somalia is the first country in which Turkish humanitarian assistance has been met with violence. This should serve as an “early warning” for Ankara to review what is going wrong and to take appropriate measures.

Another difficulty concerns Turkey's need to institutionalize its African opening. Both civil and governmental bodies are confronted with this challenge. The humanitarian aid efforts began long before the diplomatic opening and helped paved the way for the Turkish state to gain access to new areas. The number of Turkish embassies in Africa have increased, from 12 to 35, in the four years since 2009. A diplomatic expansion on such a scale also requires qualified human capital to fully assess risks and develop policies. Yet, Turkey’s civil and governmental staffs are both primarily groping along in their attempts to move forward. It would not be an exaggeration to conclude that Turkey’s capacity to respond in the face of adverse reactions is far from matching its ambitions for expansion.