GOP delays Iran sanctions vote for State of the Union

The Senate Banking Committee will hold its markup next week after Democrats cry foul. 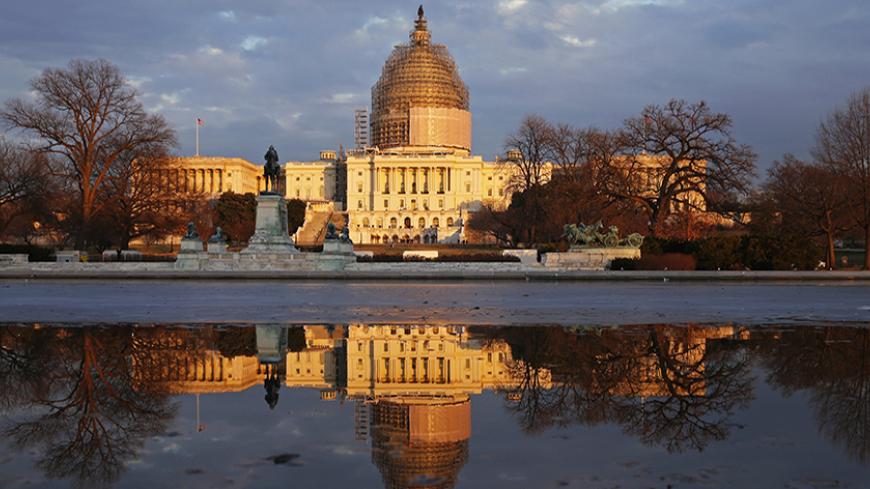 The US Capitol casts its image upon the Reflecting Pool in Washington, Jan. 20, 2015.

Republicans say they delayed an initial vote on Iran sanctions this week as a sop to Democrats but promised to move full-steam-ahead next week.

Meanwhile, the top Democrat on the Senate Banking Committee, Sen. Sherrod Brown, D-Ohio, came out forcefully against what he called a "rush" to action under newly minted Senate Majority Leader Mitch McConnell, R-Ky.

"I don't know what the rush is," Brown told Al-Monitor. "The administration is doing what it needs to do in negotiations."

The Banking Committee had been scheduled to hold a hearing on sanctions Jan. 20 and a markup on Jan. 22, but announced a weeklong delay. Panel member and bill co-author Mark Kirk, R-Ill., said the panel agreed to delay action until after President Barack Obama's annual State of the Union address to Congress Jan. 20.

"The Democrats didn't want us competing with the president for attention," Kirk told Al-Monitor. "And that seemed reasonable."

Kirk insisted that the legislation, which he co-wrote with Sen. Robert Menendez, D-N.J., would not change from its current form.

Obama is all but certain to warn lawmakers against passing new sanctions during his State of the Union speech, arguing that doing so could derail nuclear talks. Menendez and Kirk point out that their bill wouldn't impose sanctions if a deal is reached.

The delay did little to quell opposition from some Democrats on the Banking Committee, which has primary jurisdiction over sanctions in the Senate. Brown accused chairman Richard Shelby, R-Ala., of playing fast and loose with Senate rules by scheduling back-to-back action on the bill — including an undisclosed closed briefing with administration officials — without adequate prior notice.

"He did not follow Senate rules by giving us seven days notice and doing these quick-in-succession hearing, intelligence briefing and markup," said Brown, who is quickly emerging as a top administration ally in the fight against sanctions by virtue of his position on the Banking Committee in the new Congress. "We were not happy — Senate Democrats — that he wasn't following the rules."

Brown went on to argue that many members simply aren't well versed enough on the Iranian issue to make an informed choice.

"I would like to know more," he said. "And I think the committee would. Considering [there are new members on the committee] and we haven't had a hearing on this since 2013, we do need more time."

Brown's comments underscore budding Democratic opposition to the new bill, which Menendez and Kirk wrote to attract a large, bipartisan swath of senators. Someone on the Banking Committee — presumably a Democratic critic — leaked internal drafts of the bill to the anti-sanctions Quaker lobby, giving the whole world a rare chance to witness the messy process of writing legislation.

The National Iranian American Council blasted out an email alert to supporters on Jan. 20 claiming the delay was proof that sanctions advocates don't have enough members on board to vote on the bill now.

"Congressional hawks are delayed, but we haven't beat them yet — and they sure know how to fight," NIAC wrote. "Between now and January 29, anti-diplomacy activists will be turning up the heat to convince Senators to sign on to the bill before it is introduced."

Also on Jan. 20, the centrist Democratic think tank Third Way unveiled an alternative to sanctions that would have Congress pass legislation creating a Congressional Commission on Nuclear Compliance and a dedicated monitoring manager position instead. The group is seeking Democrats to endorse the legislative proposal, scheduled to be formally unveiled Jan. 22 on Capitol Hill.

And the pro-trade business coalition USA Engage and National Foreign Trade Council sent lawmakers a joint letter Jan. 20 urging them to back off sanctions legislation for now.

"Some congressional review of an agreement seems inevitable, but we continue to believe that the best course Congress can take is to wait until the negotiations either conclude successfully or fail before acting," the letter states. "At that point, if the agreement is deemed constructive and substantial, then the Congress should grant the administration full authority to suspend and/or repeal the sanctions tied to the nuclear issue."