Russia's continuing negotiations and agreements with countries of the Middle East about nuclear power will continue to be a sore point with the West. 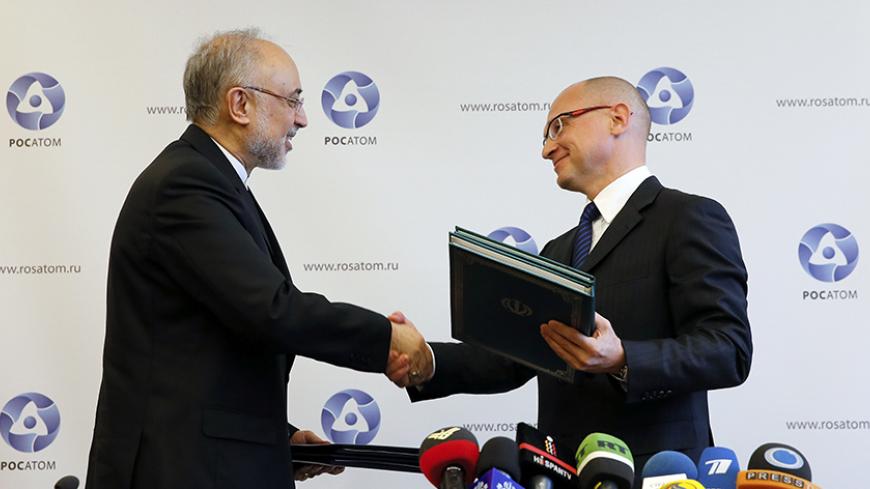 As international negotiations over Iran’s nuclear program move closer to resolution — whether in an agreement, or in collapse of the talks — Russia may see expanding opportunities for nuclear power plant construction across the Middle East. As a result, nuclear diplomacy is likely only to grow in importance for Moscow. It may also become an increasing source of tension with the United States.

The United States has, of course, long argued that an Iranian nuclear warhead, or even an enrichment capability, could accelerate proliferation by prompting governments throughout the Middle East to develop their own nuclear power plants so that they, like Iran, could move closer to a nuclear weapons capability. At the same time, rising electricity consumption is forcing leaders in the region to consider their options in ensuring adequate electricity generation. Tightening water supplies, and the massive amounts of energy required for desalination plants to process seawater for industrial, agricultural or residential use, only intensify the pressure to produce more power.

Whatever their outcome, the Iran talks are unlikely to change these dynamics very much. Iran has an operating nuclear reactor and has plans for additional units. Even if the negotiations produce an agreement that totally bans all enrichment (unlikely as Iran would not accept it), the nuclear genie may already have escaped its bottle. What responsible leader will count on Tehran’s full adherence to any deal without preparing for possible alternatives? Setting aside longstanding suspicion of Iran’s intentions, few leaders anywhere can afford to assume that their rivals always live up to their word and accordingly have to hedge their bets. And this is the best-case scenario — success in the negotiations. If the process breaks down, the pressure to consider an independent nuclear capability will only be greater.

Moscow has already been an active player in the Middle East’s nuclear energy market, signing civil nuclear cooperation agreements with not only Iran, but also Algeria, Egypt, Jordan, Kuwait, Libya, Oman, Qatar, Syria and Turkey. Seen from the other direction, Moscow has signed agreements not only with countries that are either close US or European partners (Morocco, Saudi Arabia, United Arab Emirates), too small (Bahrain) or politically unstable and/or financially strained (Iraq, Lebanon, Tunisia, Yemen). Russia of course cannot sign an agreement with Israel since Israel is not a signatory to the Non-Proliferation Treaty.

Besides Iran’s Bushehr plant — long at the center of the nuclear talks — Russia’s state nuclear firm Rosatom is already building a nuclear power plant in Turkey, at Akkuyu, which will eventually have four reactors. Rosatom is also finalizing negotiations to build a nuclear plant in Jordan, too, though company officials note that some financing issues remain unresolved. The company is also pursuing talks in other nations across the Middle East.

The circumstances in these three cases — Iran, Turkey and Jordan — are interesting in considering Moscow’s nuclear diplomacy. After the Iranian revolution, Tehran could not obtain nuclear technology from the West, leaving relatively few options beyond cooperation with Russia (particularly at the time when that cooperation began in earnest, in the early 1990s). For its part, Turkey appears to be carefully balancing its Russian nuclear plant with plans for a Japanese-French plant at Sinop and, curiously, a US-Chinese project at a site yet to be determined. In Jordan’s case, Amman pursued nuclear cooperation with the United States for many years, but apparently gave up due to US insistence on a so-called gold standard agreement that would prevent the country from developing an indigenous enrichment capability.

Jordan’s case is perhaps the most straightforward. The United States has declared Jordan to be a “major non-NATO ally” for the purposes of US law regarding arms transfers, and it has long been a close and important partner in the Middle East. It was thus natural for Amman to turn first to Washington in pursuing its interest in developing nuclear power. Nevertheless, because Washington applied its nonproliferation goals rather dogmatically, and perhaps failed to take Jordan’s preferences seriously, frustrated Jordanian officials turned to Russia instead. If Washington does not take a broader strategic view of nonproliferation in the future, others could follow the same path — creating more opportunities for Russia’s nuclear diplomacy and ultimately leading to more proliferation rather than less.

Relatively few countries in the Middle East have Turkey’s combination of exploding population and energy consumption, requiring planning for more than one nuclear plant in the near term, an economy that ranks in the world’s top 20 and political and geographical circumstances that allow for and even encourage playing great powers off against one another in the nuclear energy sector. Nevertheless, Turkey’s decision to pursue this approach is a significant one that highlights the attractiveness for many of a “Russian option” as a political signal to the United States and European governments. Committing first to Moscow’s project also likely strengthens Ankara’s hand in dealing with others.

The Iran case demonstrates how US and Western efforts to isolate governments in the Middle East (or anywhere else) cannot succeed fully without Russia’s cooperation (or China’s for that matter) — and can actually encourage governments in that situation to turn toward Moscow. Moving forward, nuclear cooperation will remain an important incentive for Moscow in attracting interest from others with whom Washington and European capitals are unwilling to work. Conversely, Russia’s willingness to pursue nuclear projects in countries the West would prefer not to have them virtually guarantees continued US-Russian and European-Russian tension over nuclear matters.

No other case in the Middle East will exactly match circumstances in Iran, Turkey or Jordan. Nevertheless, as a group they illustrate how and why Moscow is likely only to expand its nuclear diplomacy in the Middle East, regardless of the outcome of the Iran talks. US and Western policymakers would do well to prepare themselves.