Despite the damage to his relations with President Barack Obama, Prime Minister Benjamin Netanyahu's coming congressional address is expected to strengthen his status within his Israeli right-wing electoral base. 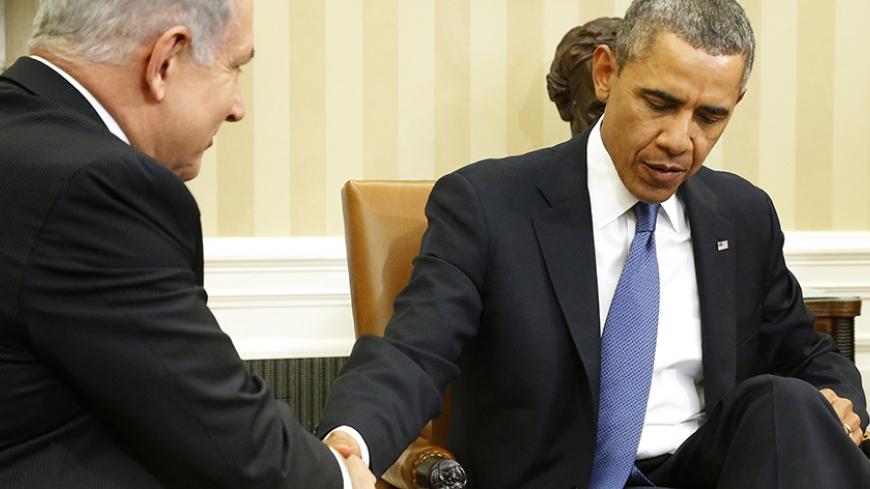 President Barack Obama (R) shakes hands with Israel's Prime Minister Benjamin Netanyahu as they sit down to meet in the Oval Office of the White House in Washington, March 3, 2014. - REUTERS/Jonathan Ernst

When Prime Minister Benjamin Netanyahu and his advisers saw the giant headlines of the weekend papers on the morning of Jan. 23, which once again heralded an unprecedented crisis between the premier and President Barack Obama, they might well have embarked on a description of the many advantages this “crisis” presented for Netanyahu's election campaign.

Headlines such as “Boycotting Netanyahu” (in the daily Yedioth Ahronoth) and “Obama’s Revenge” (Maariv) and commentaries describing the Obama administration’s reaction to the election stunt that Netanyahu cooked up with his GOP friends behind Obama’s back, not only do not hurt the prime minister on the eve of elections. They actually add him points among his right-wing constituents. From now until March 3 — the day Netanyahu presents himself on Capitol Hill — he will devote a substantial part of his time to writing the speech. As far as Netanyahu is concerned, any speech on an American lectern is the project of a lifetime, all the more so when it’s an election eve speech in the language he loves, English, largely devoted to his fight against the Iranian nuclear threat.

Netanyahu is in the throes of a crucial battle with uncertain results for a fourth term, and as in war, the end justifies the means. What a reasonably minded observer might view as a reckless blow to Israel-US relations for the sake of political survival, is explained on the right — Netanyahu’s core constituency — in a totally different light.

But not only that. Obama was never able to forge a warm relationship with the Israeli public, even though he proved — and not only in words — his commitment to Israel’s security. Such was the case, for example, with the funding of the Iron Dome air defense system, which he was unable to leverage into popularity in Israel. The Israeli public, both on the right and the left, does not feel any sense of special kinship with Obama, certainly compared to former President Bill Clinton, who could easily have been elected prime minister in Israel and who broke popularity records in Israel with the tears he shed and the “Shalom Chaver” (Goodbye Friend) at Prime Minister Yitzhak Rabin’s funeral.

Obama has been greeted in Israel with suspicion since he took office in 2009. The Israeli right fanned the flames of this attitude on more than one occasion, directing attention to Obama’s affinity for Islam, as allegedly evidenced by his middle name, Hussein. The racist component in Israel society did not help his reception. Neither did the speech he delivered in Cairo in June 2009, a few months after being sworn in, in which he proposed turning the page with Islam — a speech perceived as a negative statement of intent toward Israel, and not just by the Israeli right.

Netanyahu’s relationship with Obama began to falter soon after he was elected to office in February 2009. The ensuing crises and the innate suspicion grew stronger. Netanyahu’s election to a third term in 2013 proved that his bad relationship with the US president and the low point in the ties between the two countries did not harm his electability. Indeed, this weekend's polls of Jan. 23 also show the Likud getting stronger.

On the right, as mentioned, Netanyahu is perceived as the defender of Israel’s national interests against a pro-Palestinian president, and the general Israeli public, in the center and on the left, too, is busy and bothered far more by its socioeconomic plight and the real estate bubble. This public has been hearing about conflicts between Netanyahu and Obama for six years now, and for them there’s nothing new in the latest scuffle.

As president, Obama visited here only once, in March 2013 after being elected to his second term. It was a successful visit and the speech he delivered to a crowd of young Israelis at the Binyanei Ha’uma convention center in Jerusalem, in which he said in Hebrew “you are not alone,” lifted the barriers between him and the Israeli public for a short while. Looking back, it was but a blip on the radar. Obama — and this is probably a matter of character — did not continue nurturing the relationship and did not make inroads into Israelis' hearts.

Therefore, when Netanyahu tangles with Obama once again, the earth in Israel does not shake. On the other hand, when White House officials refer to the Israeli prime minister in derogatory terms, like calling him “chickenshit,” most Israelis are not oblivious. They don’t enjoy hearing their prime minister being insulted.

Just as the reports that Netanyahu pushed his way into the march of leaders of the free world in Paris on Jan. 11 did not damage him and even bestowed him with a dimension of national pride, the insults flowing freely his way from the White House will not, either. These simply improve his standing with the soft and the hard-core right. That he went behind Obama’s back when he arranged the speech in Congress for himself is, in their view, proof of his decisiveness in the face of an American pro-Palestinian administration, which has been trying to trip him up from the start. This public also sees the boycott of Netanyahu’s visit by Obama and Secretary of State John Kerry as an attempt to interfere in the Israeli elections for the benefit of the left wing.

For Netanyahu, the opportunity to address the two houses of Congress during the annual AIPAC conference, two weeks before the elections, is superb grist for the mill of his campaign. It will help him to market himself as the most suitable candidate for the job of prime minister, as the defender of his state against the Iranian threat and as someone who doesn’t hesitate to confront Obama to achieve this end. The live broadcast of the speech, which will likely generate across-the-board applause, the studio discussions that will follow and the before and after media interest will shift aside the Israeli socioeconomic issues and place diplomacy and defense issues center stage.

That is exactly what Netanyahu needs. To speak from the most prestigious podium in the free world, with (his political rivals) Zionist camp co-leaders Tzipi Livni and Isaac Herzog sitting in studios and talking about the danger he poses to Israeli-American ties. As far as he’s concerned, he’s there (in the United States) and they’re here (in Israel), and there isn’t a better election campaign clip. Or in the words of his court newspaper, Yisrael Hayom, Netanyahu will address a joint session of Congress for the third time, an extraordinary feat and honor accorded in the past only to late British Prime Minister Winston Churchill.