At this highly sensitive diplomatic period, when Israel needs US support in the international arena, former Israeli Ambassador to the United States Michael Oren saw fit to promote his new book by lashing out at President Barack Obama. 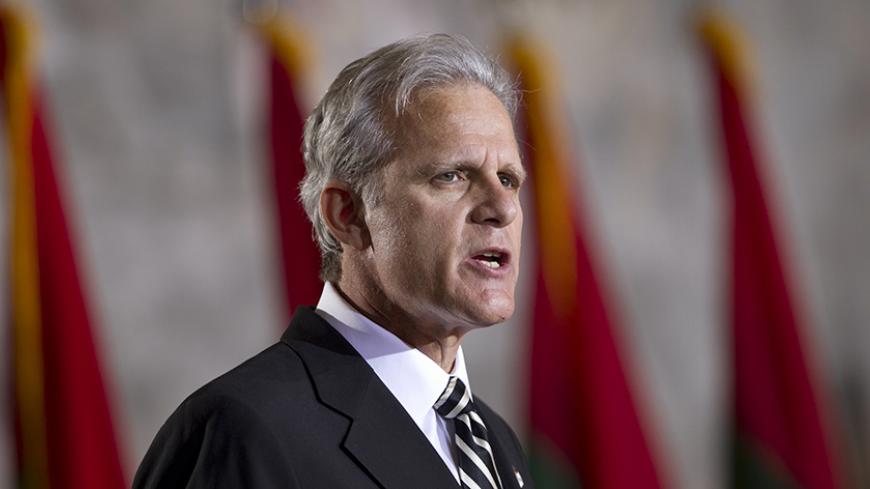 Michael Oren speaks during an event to commemorate Holocaust victims and survivors in the Capitol Rotunda in Washington, April 19, 2012. - REUTERS/Benjamin Myers

By sheer coincidence, on the day that The Wall Street Journal ran an article by Knesset member Michael Oren headlined “How Obama Abandoned Israel," the leading headline of Israeli daily Yedioth Ahronoth announced that US President Barack Obama had invited Prime Minister Benjamin Netanyahu to the White House for an official visit in July. If Netanyahu is right and the negotiations with Iran end in a “bad deal” — from Israel's point of view — this gesture of reconciliation will be by way of too little, too late.

Nonetheless, the invitation to Washington will lift the restraining order that has kept the prime minister away from the White House and provide an opportunity to improve the relationship between the two men.

One cannot overestimate the importance of an effort on the part of the leader of the greatest power in the world to set aside the bad feelings of the recent past — a past replete with insults from Netanyahu that peaked with his March 3 speech before the US Congress that was organized behind the administration’s back. Even if there will not be much good chemistry in the Oval Office, in international relations one cannot make light of appearances before the cameras and public remarks to the microphones, showing the world that the prime minister of Israel can still get his foot in the door. There is no need to belabor the importance of a reasonable working relationship between the Israeli prime minister and the man who for the next year and a half, until the presidential elections, will hold in his hand the US veto power at the United Nations and the pen that signs the forms for arms supplies to Israel.

It's exactly at this important juncture that Oren, who served as Israeli ambassador in Washington from 2009 until the end of 2013, saw fit to accuse Obama of nothing short of deliberately “putting daylight” between Israel and the United States. In the piece, designed to promote the sale of his new memoir, "Ally," Oren quoted from remarks Obama supposedly made to Jewish leaders in 2009, according to which “when there is no daylight, Israel just sits on the sidelines and that erodes our credibility with the Arabs.”

Oren accused Obama of deliberately violating the two central tenets of the Israeli-US relationship: avoiding public controversy and a mutual commitment by each side not to surprise the other with policy changes. Contrary to this series of “deliberate” mistakes, Netanyahu’s only deliberate mistake — in Oren’s opinion — was his appearance before Congress on the eve of the Israeli elections, which was plotted behind Obama’s back. But even that mistake was, according to him, a reaction to a calculated mistake by Obama.

The US ambassador to Israel, Dan Shapiro, said in several media interviews that Oren's affirmations were "an imaginary account." And indeed, it's hard to find any similarity between The Wall Street Journal piece and an interview Oren gave at the end of 2012 to the Israeli Nrg news site, in which he heaped praise on Obama: “Israel had difficult battles to fight in those years, and Obama stood by our side. At the UN they imposed a veto for us, and that was not an easy thing. In the [Mavi] Marmara affair, which was complex and dangerous, as well as during Operation Pillar of Defense, they were with us. During the operation there was across-the-board support for Israel and its right to defend itself. In public and behind the scenes they laid all the blame on Hamas. At no point was pressure put on us.”

In the interview he recounted how Obama ordered the dispatch of eight US fire-fighting aircraft to help Israel gain control of the 2010 fire on Carmel Mountain in which 44 people perished. “You see? That’s Obama,” Oren summed up. “He had no time to think and he didn’t convene a team of advisers. Those were his instincts: ‘Give Israel what it’s asking for.’”

It is safe to assume that the stormy reactions to his article this week did not surprise Oren and pleased the marketing director of his publishing house. But Oren is not only an author who decided to share with the public his reminiscences and reflections. Until two years ago, he was Israel’s most senior representative in the United States. Oren was a political appointment of Netanyahu, parachuted by him to this sensitive diplomatic post. He enjoyed the full trust of the prime minister, who has so far been mum about the problematic article. One might easily imagine how Netanyahu would have reacted to a critical article of that sort by Shapiro — a personal appointment of Obama.

More than what the article and the book say about the character and diplomatic wisdom of the senior Kulanu Party lawmaker Oren, they attest to the poor judgment of the man who appointed him as Israel’s No. 1 diplomat. A short background check would have informed Netanyahu that shortly after the signing of the 1993 Oslo Accord, Oren, then director of the Israel office of the American Jewish Committee, mentioned Netanyahu’s name in the same stroke of a pen as that of the followers of radical Rabbi Meir Kahana. As reported at the time in the Israeli daily Haaretz, in a document he sent to the organization’s board of directors, Oren wrote, “[Then Prime Minister Yitzhak] Rabin pinned his hopes on leftists the likes of [Meretz Party leaders] Shulamit Aloni and Yossi Beilin, whereas Netanyahu teamed up with [right-wing] Rehavam Ze’evi, [ultra-Orthodox Hassidic movement] Chabad and even the Kahanists.” Oren recommended forming “a united political center” led by Knesset member Benny Begin from the Likud and the chief of staff at the time, Ehud Barak, as the basis for a national unity government.

Oren's confrontation could also teach us something about the discernment of the Kulanu Party founder and chairman, Moshe Kahlon. The section of the party platform that deals with diplomacy, which Oren was tasked with writing, promises to “work to strengthen the relationship with the current US administration and the executive echelons.” Kahlon sent on the evening of June 17 a letter expressing his reservations about Oren's remarks, but his choice from the outset of the former ambassador as his senior diplomatic person leaves room for wonder.

When a senior representative of the moderate partner in the coalition (in terms of ties with the United States) addresses in such a manner Israel's relationship with the Obama administration and its executive echelons, Netanyahu can choose his deputy Foreign Minister Tzipi Hotovely as Israel's international face and take her along with him to the Oval Office. The same Tzipi Hotovely recently claimed, while speaking to Israeli diplomats, that God had given the Jewish people the entire land of Israel.