The announcement of new regulations requiring Syrians to obtain visas to enter Lebanon has caused consternation and confusion among Syrians as well as in the Lebanese government. 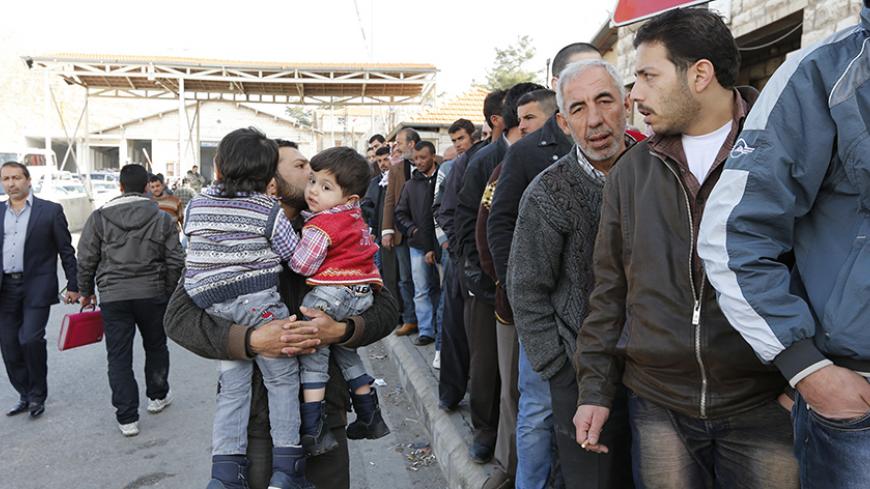 Syrians stand in a queue to get a visa stamp to enter Lebanon after their arrival at the Lebanese al-Masnaa border point in eastern Bekaa Valley, Jan. 22, 2013. - REUTERS/Jamal Saidi

BEIRUT — Early 2015 was the first time in the history of Lebanese-Syrian relations that Lebanon has required Syrians to obtain a visa to enter or pass through the country. Since Lebanese and Syrian independence in 1943 and 1946, respectively, their citizens had been able to travel relatively freely across their shared border.

A personal ID was enough for Syrians to enter Lebanon and reside and work there without restrictions or personal administrative or financial charges or fees to be paid by their employers. Even work permits were not required. Now, however, all Syrians must fill out paperwork explaining their reason for entering the country and provide other documents. Maj. Gen. Abbas Ibrahim, head of the General Security Directorate (GSD), linked the change to the number of Syrians refugees in Lebanon having reached 1.6 million.

On Oct. 23, 2014, the Council of Ministers approved a paper prepared by the ministerial committee responsible for Syrian refugees. It stated that Lebanon must “halt the influx of refugees at the border, except for exceptional humanitarian cases, and to record the entrants at the border according to the reason for entering [Lebanon]. This is to make sure that the measures are being properly implemented.” The state was also called on to “strictly apply the Lebanese laws in this regard and revoke refugee status from everyone who enters Syria and violates the Lebanese laws and conditions for entry.”

The most significant development took place Jan. 5, when the GSD, which is under the Interior Ministry, required that Syrians obtain an entry visa and released a list of the nine types of visa classes, each requiring supporting documentation: tourist, business or worker, real estate owner, student, transit, medical, foreign embassy consultation and Lebanese sponsorship. Stays on all visas was restricted to a maximum of one month.

Security sources described this step to Al-Monitor as “surprising” in light of the Lebanon-Syria Treaty of Brotherhood, Cooperation and Coordination of May 1991. The worst the Syrians probably expected was denial of entry for additional refugees, but without legal requirements to govern the process.

The new regulations did not go unchallenged. Some parties in the government declared that they had not been involved in the decision and opposed the new rules. Ministerial sources from the March 8 coalition were quoted in the media as saying that Hezbollah and Amal movement ministers had informed Prime Minister Tammam Salam that they rejected the move, arguing that what had been agreed upon was to regulate the entry of refugees, not require the granting of visas.

Syria’s ambassador to Lebanon, Ali Abdul Karim Ali, also expressed his dissatisfaction, saying the move had been made without coordination with his country and expressed his desire that the Lebanese government not implement the regulations.

Gen. Ibrahim, while inspecting the al-Masnaa border crossing Jan. 12, responded, stressing, “The measures taken to regulate the entry of Syrians into Lebanon will continue despite some criticisms that were recently expressed.” Yet, he also said, “The visa issue is not an option,” confusing the issue of whether Syrians actually needed a visa.

Sources explained that the new measure was based on a decision between Interior Minister Nohad Machnouk and Salam. It was not discussed in the Council of Ministers, because the discussion would have resulted in the March 8 coalition ministers rejecting it, as they would have demanded coordination with Syria, which the March 14 coalition ministers would have rejected, as they oppose any communication with the current regime.

The confusion and tension surrounding the visa issue prompted Ibrahim to visit Damascus on Jan. 14 to update officials, sources said. The visit coincided with a Lebanese Foreign Ministry statement announcing, “Syrians are not required to obtain a visa of any kind to enter Lebanon, but they are required to explain the reason for the visit and submit the required documents.” Machnouk then affirmed, “The measures, which do not require a visa but rather regulates the entry of Syrian non-refugees, will not be retracted.”

All of these statements clearly indicate that the Lebanese position on visas for Syrians has changed, although pro forma, according to the sources. The visa decision had been published in a statement by the GSD, declaring, “As of Jan. 5, 2015, Syrian nationals who wish to enter Lebanese territories must obtain an entry visa.” Although there has since been a change in position by Lebanese officials and the Ministry of Foreign Affairs, the GSD has yet to issue a clarification.

Sources explained that calming the situation could shield Lebanon from any negative consequences that might result from an escalation by the Syrian side. The most notable repercussion would likely be in regard to transit though Syrian territory, which is the only route between Lebanon and the other Arab states. They asked, “What if the Syrian side decides to close the border, as it did before?”

The sources considered that for now, the negative impact on Lebanon cannot be assessed should Syria apply the principle of reciprocity and require Lebanese citizens to obtain a visa to reduce the number of them entering during the war. The repercussions will, however, inevitably appear, after the situation stabilizes and the need again arises for Lebanese citizens to cross Syrian territory to reach Iraq, Turkey, Iran, Jordan or for other transit or trade purposes.

Without the GSD officially announcing any updates regarding the new regulations, the new regulations for now remain valid. Although they succeeded in stemming the rise in the number of Syrian refugees in Lebanon, and in legalizing the situation of a number of them, the solution to the crisis of the 1.6 million refugees already in the country remains unresolved.