Hezbollah’s attack on an Israeli patrol in Lebanon’s occupied Shebaa Farms was expected to break into an all-out war on Lebanon, but sources told Al-Monitor that Israel was asked not to engage in such a war. 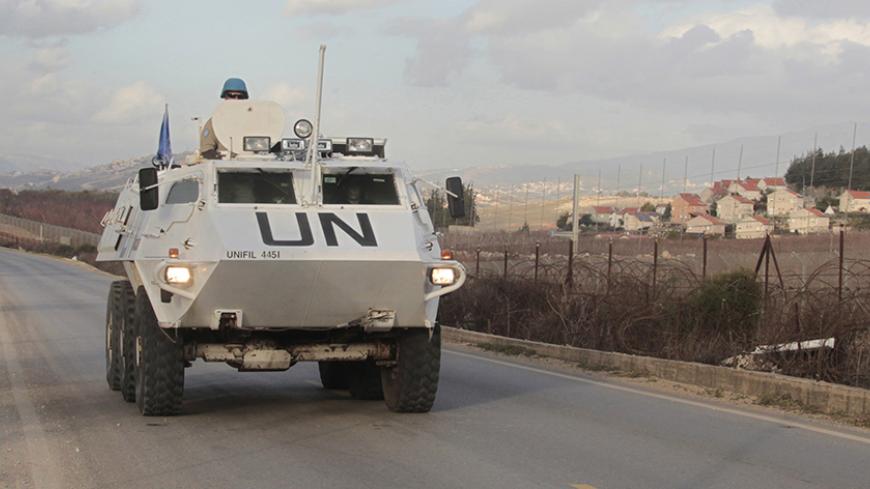 Peacekeepers of the United Nations Interim Force in Lebanon (UNIFIL) patrol in Kfar Kila village in south Lebanon, near the border with Israel, Jan. 28, 2015. Two Israeli soldiers and a Spanish peacekeeper were killed on Wednesday in an exchange of fire between Hezbollah and Israel. - REUTERS/Aziz Taher

Hezbollah did not wait long to carry out its threat and retaliate against the Israeli raid that targeted one of its convoys in the occupied Golan Heights on Dec. 18. At 11:25 a.m. Jan. 28, Hezbollah launched a rocket attack on an Israeli patrol in Lebanon’s occupied Shebaa Farms, and followed it with a communique titled “Statement No. 1,” in which it took responsibility for the operation executed by the Quneitra Martyrs Brigade. In response, Israel waited more than five hours before confirming the attack, admitting that two of its soldiers were killed and seven others wounded.

As a result of the operation, the prevailing question on all regional parties thus became: “Will Israel embark on a wide-scale escalation in response to Hezbollah’s attack? Will the southern Lebanon arena become the scene of an all-out war, as was the case on July 12, 2006, when Hezbollah executed an operation against the Israeli army, and captured two of its soldiers?

A Lebanese government official, who requested anonymity, affirmed that the prevailing trend indicated a de-escalation of the situation; and that all signs pointed to Tel Aviv refraining from opening its northern front. Among those indications mentioned by our source were the following.

The Israeli army, thus far, contented itself with shelling woodlands most probably used by Hezbollah to attack the Israeli military convoy or withdraw after the operation. In other words, the Israeli army did not rush to bomb public installations, roads and bridges as it did in the summer of 2006. It did not appear to be trying to cut off lines of communication between different regions or strike at vital areas as a prelude to a wider-scale offensive.

Tel Aviv employed a two-pronged media tactic: It imposed a blackout concerning the army’s loses, and then delayed for hours any announcement pertaining to the number of casualties. This tactic aimed at mitigating the impact of the blow and alleviating its effect on Israeli public opinion, in such a manner that Israeli authorities would not be pressured by their populace to respond, in a clear departure from the exaggerated and immediate media campaigns that Israel began whenever it intended to embark on a wide-scale response.

Israel resorted to the United Nations, a remarkable and rare occurrence when compared with its behavior on previous such instances. For, historically, Israel would be the initiator of strikes against Lebanon, which would content itself with filing a complaint in that regard in New York. Israel’s adoption of UN procedures this time around indicated that it was trying to absorb the blow and transform the response from a military to an international diplomatic one.

Does that mean that Israeli officials were inclined to accept Hezbollah’s affront and acquiesce to the logic of eye for an eye, meaning the Shebaa Farms attack in response to the Quneitra raid, without going further? Many factors bolster this presumption.

Whatever the case, it is certain that the coming few hours will reveal Israel’s true intentions in this regard. What is also likely, though, is that the events of the last 10 days, in Syria’s Quneitra and Lebanon’s Shebaa Farms area, will allow Hezbollah’s Secretary-General Hassan Nasrallah to make a televised appearance on Jan. 30 to commemorate the death of Hezbollah fighters in the Quneitra raid, announce his party’s victory in this new round in the conflict with Israel and repeat to the audience his famous words: “As I always promised you victory, I now promise you victory once again!”