The Lebanese army waits for the authorities to take decisive action and cooperate with Hezbollah and the Syrian regime to fight radical groups in Lebanon. 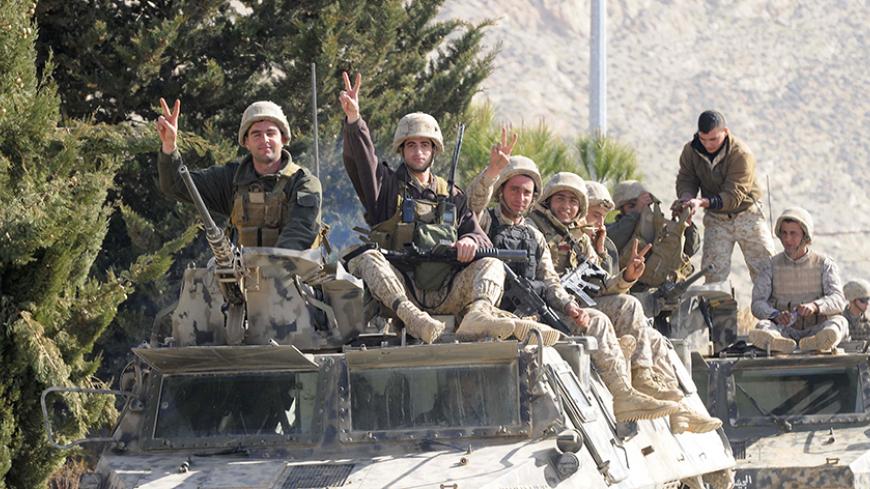 Lebanese soldiers gesture while riding on an armored vehicle as they leave the mountainous border town of Ras Baalbek, Jan. 24, 2015. - REUTERS/Hassan Abdallah

In a series of clashes that lasted 72 hours, the Lebanese army succeeded in deterring the Jabhat al-Nusra attack on the Syrian border in Ras Baalbek, northeast of Lebanon. But the battles did not end there, and worrying signs are weighing on the Lebanese army and Lebanon.

The latest battle broke out at dawn Jan. 22. A military source revealed to Al-Monitor on condition of anonymity that the army units, which were positioned in Tallet al-Hamra facing the Syrian border between Arsal and Ras Baalbek, were waiting for the snow that had hit the region two weeks earlier to subside. With the snow melting, the soldiers expected Jabhat al-Nusra to surprise them at the front lines, mainly Tallet al-Hamra hill. The army was getting ready to connect the hill to other neighboring spots by bringing in dredges and paving field roads to facilitate its movement and communication and allow it to increase surveillance on the surrounding lands.

Dawn on Jan. 22 brought both the terrorist attack and the army’s dredges. Clashes broke out, and the army shelled the terrorist positions and launched airstrikes from helicopters. After around 72 hours, the attackers withdrew, leaving behind 35 dead, according to the same military source. The army announced the death of five soldiers in its ranks.

A government source following up on the ongoing confrontations between the Lebanese army and Jabhat al-Nusra told Al-Monitor on condition of anonymity that the issue requires radical action. It cannot be left to proceed as it is. In general, no army can engage in a war of attrition with any militia. The balance of power is not reassuring. The terrorists, divided between the Islamic State (IS) and Jabhat al-Nusra and deployed along the northeastern border of Lebanon, can mobilize thousands of armed men who are ready to die.

The government source stated that he had official information confirming that on Jan. 23, contact was lost with three of the army’s soldiers who fell during the recent clashes. The army found their bodies the next morning, after it forced Jabhat al-Nusra to withdraw and increased its presence in the region. The soldiers had been shot in the back, meaning that the terrorists intentionally killed them and left them to be found. This made the army more alert and cautious, and it soon discovered that the three bodies had been planted with bombs that would detonate when they were moved. The Lebanese army is up against terrorists who are acting without any legal or humanitarian restraints.

The Lebanese army cannot become mired in a permanent war of attrition, leaving it with few options:


The Lebanese army remains torn between a suicidal withdrawal and a forbidden attack, with only one choice left — to continue to be drained by the terrorists. This option is not only costly, but does not constitute a solution and cannot go on endlessly.