Makeshift hospitals are being set up in basements and schools across Kobani to treat fighters and civilians while armed groups have targeted the city’s main hospitals. 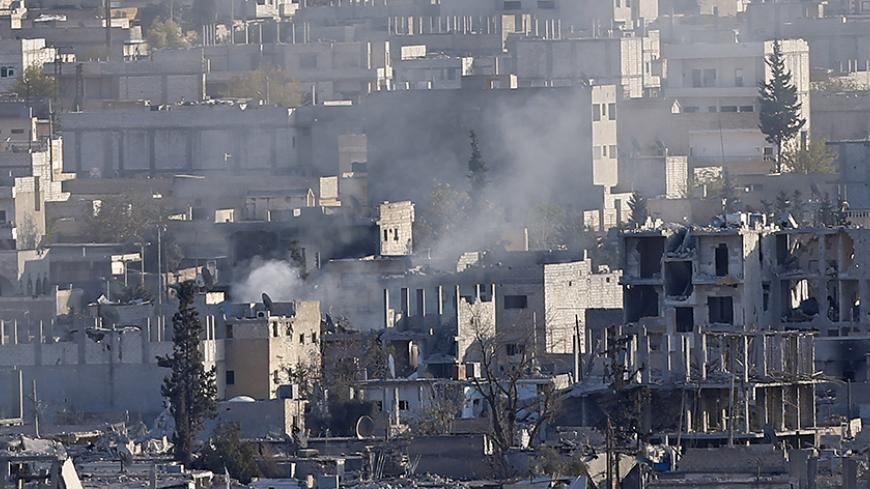 KOBANI, Syria — It was not easy for Al-Monitor to enter Kobani. The random shelling by the Islamic groups, on the one hand, and the closure of the border crossings by Turkish forces on the other, made it difficult for us to get any news about what was happening across the border. The invasion of the city and the security cordon that was imposed on it — aimed at intimidating citizens — resulted in the displacement of about 200,000 people from Kobani and its surrounding villages. Most of them fled to the Turkish city of Suruc.

Suruc is about eight kilometers (five miles) from the Syrian border and Kobani. Al-Monitor had trouble getting in as there were no smugglers on the Syrian-Turkish border, who usually allow people to cross it. Those who cooperated support the People's Protection Units (YPG) — the Kurdish forces fighting in the city.

Driving through some villages, Al-Monitor noticed that some residents are guarding the bordering region at night. The region’s overwhelming Kurdish majority believes that Turkey is helping the Islamic groups enter the city of Kobani.

That is why they [Kurds] are protecting their cities. “We are protecting our villages to prevent these Islamic groups from entering the city and killing our people. The Turkish state is supporting them with arms and helping them to destroy this safe city,” a taxi driver told Al-Monitor.

The city’s hospitals have been destroyed so as to prevent fighters and civilians from receiving any treatment and to force them out. The field hospitals treating serious emergency cases have settled in some schools and basements as the National Hospital and the civil one have been destroyed.

Al-Monitor visited the field hospital that was established by fighters in the city. “I studied in the Maghreb. I am a radiologist but under the circumstances I am administering first aid and taking care of other cases. The humanitarian situation is really bad and unbearable to anyone. The Islamic State (IS) is not only trying to control the city but to terrorize people with behaviors we have never been used to. They are trying to impose their 14-century-old rules. The hospital here is in a dire condition, as we are suffering from a lack of essential medications, which prevent us from helping some fighters and civilians.”

“I am not here after money but to protect my people and take care of my brothers who are fighting to protect this land. We have few drugs to treat people and we are not allowed entry of humanitarian aid from the Turkish side, while Turkey has been supporting IS armed groups,” he added.

Since Sept.16, the city of Kobani has been bombed by Islamic groups, at certain times systematically, and at other times randomly. Heavy weapons have been used in the attack on the city, which led to the destruction of properties and homes. Some regional and international governments have sent intervention forces to stop IS from advancing and to aid the YPG. The Kurdistan Region of Iraq came to agreement with the Turkish state and the Kurdish People’s Protection Units to allow the heavily armed Kurdish peshmerga forces to enter Kobani, which came as part of the medical crew treating the wounded.

Al-Monitor met with Lt. Col. Dr. Hussein Mohammed, and asked him about the medical situation and about the problems suffered by the fighters and civilians.

“We are working with the Kurdish forces. We have some medical equipment and medications to treat the peshmerga forces and the wounded from our brothers in the YPG and the civilians. We are doing our best to treat the wounded Kurdish fighters and civilians in cooperation between us,” he said.

Kobani has turned into a ghost town. Buildings have been flattened to the ground, while the majority of the city’s residents have deserted, leaving it behind for the snipers of radical groups.

Al-Monitor spoke with some of the YPG's wounded at a field hospital.

“Here, we are fighting terrorists,” one fighter told Al-Monitor. “Being injured for us is as if we were on a break only to resume fighting afterward. We are fighting wherever we are, not only on the battlefield. The wounded among us take up arms to protect themselves and the regions we have liberated. I have been fighting in Kobani since the beginning of the mercenaries’ attack. I did not want to leave. We have to fight against those because they are a threat to the entire humanity. We are being administered first aid to treat our wounds only to go back to our positions. There are no hospitals where we can stay. Some of our comrades are sent to Turkey if they suffer from serious injuries but the Turkish government has arrested many of them and killed others. Therefore, we prefer to stay here and receive medical treatment in these dire conditions.”

It was surprising to see a foreign female doctor helping people in the stricken city of Kobani. “I came here to find out what was going on. There are many things we do not know abroad,” Maria Robert, an Argentinian doctor, told Al-Monitor.

“I had been following up on the situation in the city and I was deeply affected by the bombing of civilians and how they has been displaced randomly and systematically. Innocent people were being slaughtered without any reason and there was no one to treat the wounded. I came here so I could help as much as possible, for the sake of humanity and out of respect for my profession,” she added.

The battles between the Kurdish forces and IS are still ongoing in Kobani and many believe that the Kurds are fighting terrorism on behalf of the world because control over border areas by these groups is a threat to the international community.