The writer gives a personal account of his trip on Nov. 15-16 to Suruc, across from Kobani on the Turkish side of the border, and relates how locals believe that the Kobani battle may bring an end to the Islamic State in military terms. 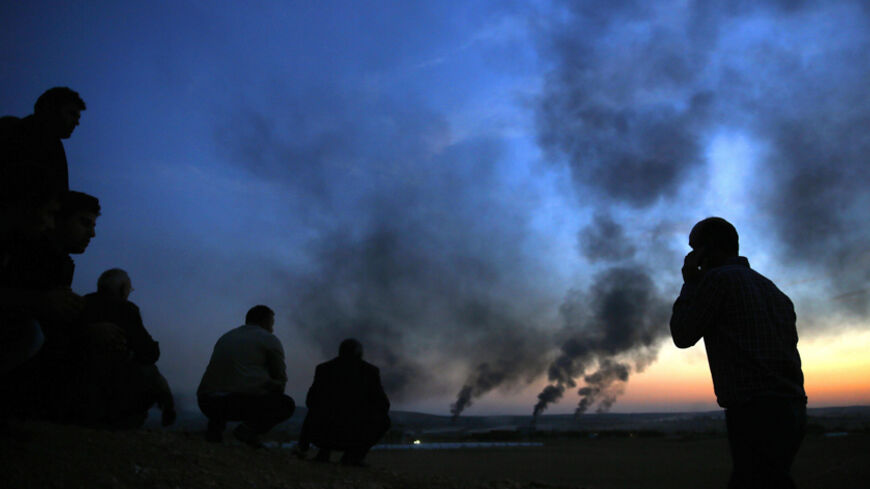 Kurdish refugees watch from a hilltop as thick smoke rises from the Syrian town of Kobani during heavy fighting between Islamic State and Kurdish peshmerga forces, seen from near the Mursitpinar border crossing on the Turkish-Syrian border in the town of Suruc, Oct. 26, 2014. - REUTERS/Yannis Behrakis

SURUC, Turkey — I spent time Nov. 15-16 close to the besieged Syrian Kurdish town of Kobani, located within half an hour's drive from Turkey’s historical provincial capital Urfa. Suruc, the twin Kurdish town on the Turkish side of the border, is about 10 kilometers (6.2 miles) across a flat and fertile plain that was built on a hill overlooking the plain.

About 8 p.m. Nov. 15, I witness vehicles moving toward Kobani from Suruc being stopped and diverted by Turkish security forces. Turning left, my young Kurdish guide from Kobani and I reach a small village called Caykara in Turkish and Mehser in Kurdish. At the village's entrance, we see a makeshift parking lot full of cars with license plates from Turkey’s heavily Kurdish-populated provinces as well as from Ankara and Istanbul.

Kurds from all corners of Turkey have come to express their solidarity with the epic Kobani resistance, now in its 63rd day, labeled as the “Stalingrad of Kurds” by the Kurdistan Workers Party (PKK) and its Syrian affiliate, the Democratic Union Party (PYD).

Such gatherings in solidarity with the Kobani resistance has become a daily affair in all nearby Kurdish villages overlooking territories controlled by the Islamic State (IS).

Hundreds of people had assembled on the day of my visit to Mehser and the adjacent village of Miseynter. Walking to a spot from where I can see Kobani better, we are surrounded by Kurds from Mehser, who recognize me because of my TV appearances.

One of them says, "If you had come half an hour ago, you would have seen the violent clashes.” Kobani is only a couple of hundred meters away, and villagers tell me the dark space between the lights of Turkish villages and border posts is actually Kobani.

Not long after we start hearing the engines of the coalition aircraft, Kurds around us immediately yell, “Biji Obama” ("Long Live Obama").

Coalition planes fly above us for half an hour. There was no anti-aircraft fire, probably because it would be inefficient and it would then be easier to pinpoint IS positions to attack.

Those who have been watching the clashes in Kobani and the coalition’s airstrikes minute by minute insist that the military balance has decidedly turned against IS. Particularly after IS withdrew from the Mishtanur hill that dominates Kobani from the east, and the People's Protection Units (YPG) advanced to control the road that IS used as its main supply line coming from Raqqa, it became apparent that the military balance was in favor of the defenders of Kobani.

As we were walking back to our car to return to Urfa the ground under us started to shake. Coalition aircraft had started their bombing of IS positions. Villagers grinned and said, "We told you. First there is the aircraft noise, then the bombing."

On the way to Urfa we drive through Suruc again, a town that is famous for growing pomegranates. In the center of the town stands a statue that resembles Saddam Hussein’s Hands of Victory monument; here, a hand raises upward and holds a pomegranate, instead of a sword.

Nearly 200,000 Kobani residents have left. The villagers insist people did not flee in panic but as a protective measure against a potential massacre and as a military tactic of the YPG to lure IS into urban areas.

Kobani Mayor Anwar Muslim, whom I had been with in Erbil the week before, had told me, “There are still civilians of Kobani remaining in the town, but not more than 1,000 people.” The YPG fighters in Kobani, of whom roughly half are women, are a few thousand.

Muslim said that the YPG controls 70% of Kobani, while IS controls about 30% of the eastern and southern parts.

The locals in Suruc and Urfa tell me that the Turkish government that is boasting to have received and provided shelter to the refugees of Kobani is not entirely accurate. Government-affiliated institutions did in fact provide help and shelter but to no more than 6,000 people. The overwhelming majority are taken care of, according to the locals, mainly by the people of Suruc, which has a population of 101,000 as displayed on the sign at the entrance of the town.

At the exit of Suruc toward Urfa, three refugee camps on the side of the highway have been erected close to each other. Thousands of people, mostly women and children, live in the camps' tents that were set up by the municipality of Suruc, whose mayor is a member of the People's Democracy Party (HDP), the sister party of the PYD in Turkey, which is known for being pro-PKK.

Tens of thousands of refugees from Kobani live in shelters provided by various organizations scattered around Suruc, its villages and in Urfa. Many live next to their vehicles that hold their belongings in the no-man’s-land between the barbed border fences in a part of the Suruc plain that IS has not reached.

Early on Nov. 16, I return to the Kobani area. This time, I am closer to Kobani and at a height from where I can see the town and its vicinity clearly with the naked eye. I am not allowed to cross over, but the young commander of a Turkish military unit allows me to move forward because he recognizes me. On my right are Turkishs tanks lined up with their barrels pointed south toward Kobani.

The foreign press is allowed access by special permission to another nearby hilltop. A military police corporal tells me, "A short time ago Reuters went through.”

The unit commander says there was heavy coalition bombing about 4 a.m., adding, "If US planes had not come to help, IS would have captured Kobani long ago. Even today, if there are no planes, they can still take it.”

He says the IS flag still flies at the bottom of Mishtanur hill. He hands me his binoculars and I can see the black IS flag above a semi-finished building. At that moment, a bullet flies past our heads. The commander quickly says, "Go behind the bunker. They saw you looking through the binoculars. This is IS sniper fire.”

We continue watching Kobani from a safer location. My young Kurdish guide tells me he spent his childhood in Kobani as his mother hails from there, and he tells me about the town street by street, building by building.

"What is the situation in Kobani now?" I ask. The Turkish commander says the coalition bombing was to prevent IS from seizing the border crossing to Turkey, which it had succeeded in doing so.

The commander, who was recently temporarily assigned to this hilltop from his unit inside Turkey, says, “If the American planes had not hit IS, Kobani would have fallen long ago. The PYD is now happy, the US is happy and the PKK is happy. What does all that mean? Who is going to benefit from this war?”

I tell him, “These are profound issues. We can’t find the answers on this hilltop.” He laughs.

After looking through his binoculars and speaking with the locals, I, too, have questions I hadn’t thought of before. Most of Kobani is entirely destroyed, and even if IS is expelled from Kobani, reconstruction of the city will be a tremendous effort that requires large sums of money. Who will provide this? How many people will return for resettlement?

There is another inevitable question: What would the Kurdish self-rule mean in Kobani, as the infrastructure of the town is completely destroyed? Who will rule who on what basis?

Last week, Muslim had told me that if IS is expelled from Kobani, it couldn’t survive in rural terrain. If he is right, territorial gains of IS in that part of Syria may be rolled back after IS leaves Kobani.

Could the “Stalingrad of the Kurds” be the beginning of the end of IS in military terms?