Israeli Arabs are disappointed by the Arab parties and feel that only a large party would be able to bring about a change in their socio-economic situation, hence the Labor Party must take up this challenge and renew a dialogue with them. 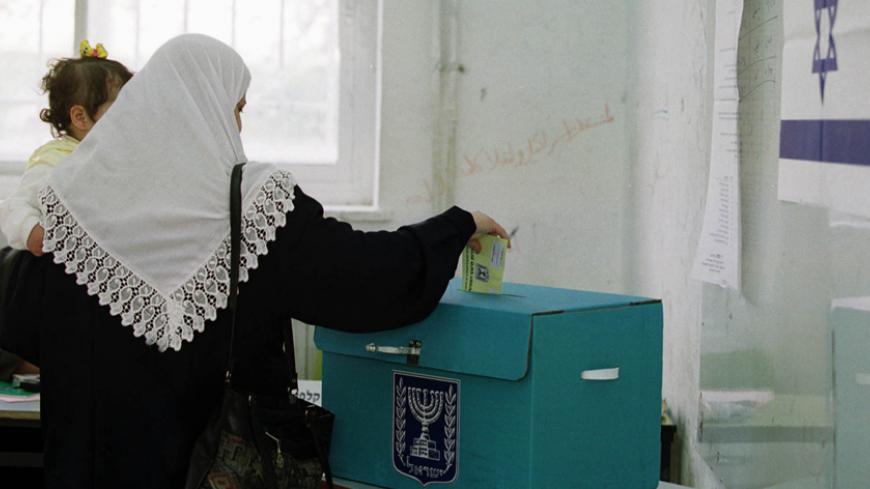 An Israeli-Arab voter drops a ballot into a ballot box during voting in East Jerusalem, Feb. 6, 2001. - REUTERS

The Labor Party has picked its A-team. The list of Knesset candidates elected in the Jan. 13 party primaries is diverse, young, socially oriented and dynamic. It has an impressive representation of women and one Arab candidate, Zuhair Bahloul, who's supposed to carry on his shoulders the entire Arab sector.

The Labor Party reserved only one realistic slot for a non-Jewish candidate. This relays the impression that the party is convinced that it is a waste of time and there is no way Arab voters, who in the past provided Labor with at least two Knesset seats, can be persuaded to change their minds and return.

In the two months before the March 17 elections, the party’s candidates will travel up and down the country, trying to persuade more and more voters disappointed with the Likud Party to vote for them because, without new constituencies, Labor Party Chairman Isaac Herzog and Hatnua leader Tzipi Livni do not have much hope. The latest polls show Labor with a slight advantage over Likud. But even if these findings turn out to be the real election results, the Labor Party will not be able to form the next government. The right-wing bloc in Israel is still bigger than the combined votes of the left and center, even if the Arab parties’ votes are also counted.

Arab Israelis served their divorce papers to the Labor Party and the entire Israeli political system in the 2001 elections. Until then, Labor had active branches throughout the Arab sector. These disappeared at once when the prime minister and Labor chairman at the time, Ehud Barak, was deemed by many in the Arab sector to have been the one mainly responsible for the killing of 13 Arab demonstrators in October 2000. The branches were shut down, the voters disappeared and Labor went on to deal with its many problems.

Some 14 years have gone by and a new generation has grown up in the Arab towns and villages — a generation of young people ambivalent in their stance toward Israel, feeling on the one hand despair and indifference toward the Israeli political system, but on the other hand an intense desire to integrate and be part of Israeli society.

On Jan. 6, I wrote an article after a visit to Umm al-Fahm. The indifference of the Arab residents toward the Jewish Zionist parties and the Arab parties stems from a prevailing sense among most of them that none of the parties did anything to improve their living conditions and rectify the discrimination against them. Nonetheless, it seems Israeli Arabs do not see themselves under a different sovereignty, meaning Palestine. Sixty-seven years of being part of Israeli society has shaped the unique social structure of Israeli Arabs. They are rooted in Israel, while at the same time detached. They are an integral part of it, but also a foreign seed. Apparently, their utmost aspiration is not to be part of Palestine, eventually, but to be accepted and have equal rights among Israelis.

There is an intense desire, mainly among young people, many of whom completed their studies at Israeli universities and colleges, to be offered suitable employment and the chance to make use of that education. They cannot get such promises from the Arab parties and Arab legislators, not just because they have lost faith in them, but because of the sense that these are small parties and even if they made an all-out effort, they would not be able to affect change. They feel that those that can both promise and deliver are the large parties. Therefore, this is the time for the Labor Party to recruit the votes of young Arabs desperate for a significant change in their social and economic situation.

The Labor Party’s election campaign is focusing on socio-economic issues, and who better than young Israeli Arabs, discriminated against and disadvantaged, to connect to the new economic tidings? Hence, all that the Labor Party representatives, including its young candidates, need to do is go to Umm al-Fahm, Tira, Taibeh, Baka al-Gharbiye and other towns and villages, and launch a dialogue with potential voters.

During such encounters, representatives of the party claiming the throne will be able to hear about the distress of Israeli Arabs and to talk to them about matters stemming from the party’s political agenda. They could tell concerned Arab Israelis, for instance, loud and clear, “We object to the nationality bill [which designates Israel as the nation-state of the Jewish people only], and if we come to power we will bury this discriminatory proposal once and for all in the place it deserves.” Members of the Labor Party will be surprised to discover that every sliver of hope might be answered with a ballot at the polling station.

Meantime, the Labor Party is busy trying to draw back Jewish voters who left over the years, and according to my estimate, even if the Arabs fulfill their duty and right to vote, they will do so mainly for the Arab parties. Israeli Arabs refrain from voting or vote for Arab parties because they felt that no one offered them an alternative. This is the Labor Party’s mistake.

As of now, the Arab parties are continuing to discuss a joint run. Although it's clear to all that they must unite if they are to survive the newly raised electoral threshold, understandings and agreements over a union have yet to be achieved and are unlikely to be reached before the elections.

The reason for the great difficulty in forming a unified Arab list was best described by Supreme Court Justice Salim Jubran, who also serves as chairman of the Central Elections Committee. During a hearing on a petition against raising the electoral threshold in December, Jubran said: “The Arab sector is being forced to unite on one list. It’s a problem. There are various ideologies, several views of the world.”

It seems that there are many among the Israeli Arabs who are willing to give Labor another chance for the sake of hope for change. But the prevailing impression is that the party, which has to fight for each and every vote, keeps ignoring Israeli Arabs as if they were transparent.