Palestinians in the occupied territories welcomed the decision by their brethren in Israel to form a joint list for the March elections. 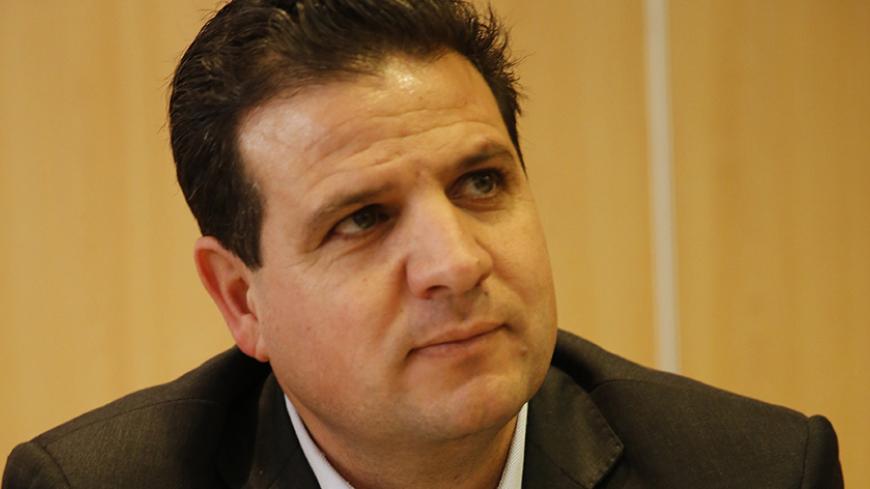 Israeli Arab lawyer Ayman Odeh, the first candidate on the joint Israeli Arab party list, looks on during a Jan. 23, 2015, news conference in the northern city of Nazareth to announce that Israel's Arab parties have joined forces ahead of March elections. - Wikimedia Commons/Anan M

Good cartoonists can summarize major issues with a simple image. The Palestinian cartoonist Khalil Abu Arafe summed up the Palestinians' warm welcome for the joint list of Palestinian citizens of Israel to compete in the Israeli parliamentary elections scheduled for March 17. In a Jan. 24 cartoon, Abu Arafe depicts Ayman Odeh, head of the joint Arab list, saying, “We are staying here,” while next to him three Israeli candidates — Isaac Herzog, Tzipi Livni and Benjamin Netanyahu — ask in reference to the Arab list, “Where did they come from?”

The unprecedented success of Palestinians in Israel agreeing to a joint list is in fact likely to create the fourth-largest bloc in the 120-member Israeli Knesset provided the public comes out to vote. Palestinians in the occupied territories generally welcomed the unity of their compatriots in Israel, and some leaders of the Palestine Liberation Organization (PLO) have even taken partial credit for the list. In a phone interview with Al-Monitor, Yaser Abed Rabbo, secretary-general of the PLO’s Executive Committee, expressed his pride in the PLO’s contribution.

He commented, “We don’t hide the fact that we supported this unity move from the beginning. We are always supportive of unity on the bases of the joint national identity of the Palestinian people and in the face of racism whose victims are the Arab population in Israel.” Abed Rabbo explained that the PLO supports the unity of Palestinians everywhere for the same objective and national reasons and understands the specific nature and challenges of the various communities.

Abed Rabbo dismissed the idea that the PLO’s encouragement of a joint list had anything to do with future Palestinian-Israeli negotiations. He considered it a “superficial simplification” of a complicated situation. “Sure we are for their unity against the right-wing racists, but this desire doesn’t stem from a selfish point of view,” said Abed Rabbo. The PLO official stressed nonetheless that Palestinians yearn for peace and would love to see “a genuine partner for peace” emerge from the elections.

Mohammad Masharqa, cultural attache at the Palestinian mission in London, called the joint list a reflection of the “genius” of the Palestinian spirit. He said that the decision of four ideologically different parties uniting on one list reflects the depth of the current ideological “craziness” in Israel toward Palestinian Arab citizens.

Masharqa told Al-Monitor that a number of senior Palestinian officials had encouraged the unity effort. As a positive example he highlighted the role of Tawfiq Tirawi, a former head of the Palestinian intelligence service, in convincing Ahmad Tibi, former adviser to the late PLO leader Yasser Arafat, to accept the joint list despite possible disadvantages to his party.

The joint Arab list has not, of course, been wholeheartedly welcomed. Ali Qaraqe, a comedian and satirist from the Bethlehem area, told Al-Monitor that he is opposed to policies that will try to beautify Israeli occupation practices. Abdullah Awad, a political activist, said he is worried that a joint Arab list, by signifying unity among Arabs, will exacerbate the situation by leading Israelis to react by seeking to further emphasize the Jewishness of Israel.

Jamal Zakout, spokesman of former Palestinian Prime Minister Salam Fayyad, told Al-Monitor that the new list will have multiple roles. “It is true that the unity was born as a result of existential fears of the racist right wingers in Israel, but this should not stop efforts at creating positive impacts on the general Israeli public.”

According to Zakout, who now heads the Al-Ard Center for Public Policy, “Ayman Odeh [the No. 1 candidate of the joint list] has a tough challenge ahead of him, namely, to break out of the isolation and engage with the Israeli public.” Zakout believes that although Israel's Palestinian citizens want to slam right-wing policies, they must simultaneously show support for equal citizenship and support for the peace process.

Support for the joint Arab list has arisen from various circles. The Rev. Mitri Raheb, pastor of the Bethlehem Lutheran Church, told Al-Monitor that he welcomes the formation of the list. “It may be impossible for a unified large Arab bloc to enter any future government, but at least they will be able to block the quick formation of a ruling coalition.”