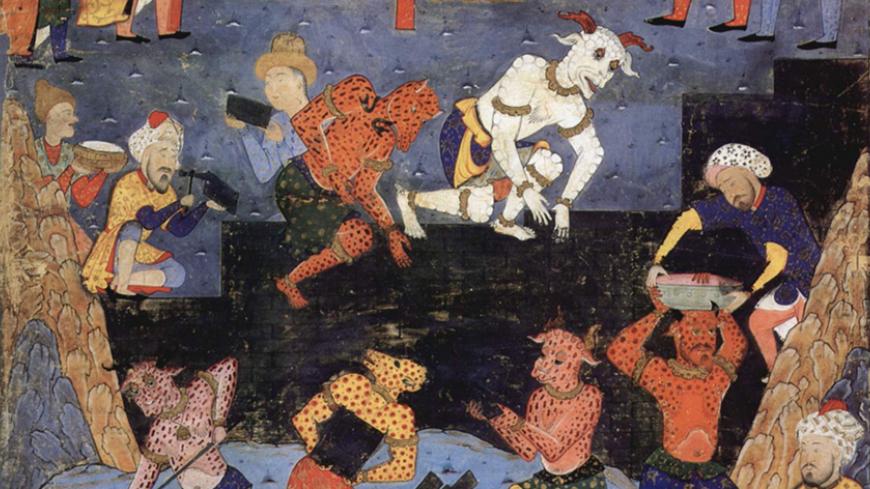 A 16th century miniature painting from an Islamic manuscript depicts a group of jinn building a wall for Alexander the Great. - Wikimedia Commons

In the last 10 years, the phenomena of magic, spirituality and belief in jinn (supernatural creatures in Islamic mythology) possessing human bodies have become commonplace. TV channels show programs presented by people claiming that they can heal the possessed with these kinds of magic, and they opened spiritual healing centers. The Iraqi Al-Diyar channel has been showing the Douroub Al-Raja program for several years. Ali al-Shabyani, who claims he has the power to heal people on air thanks to magic and jinn, presents the show.

Since the phenomenon has become widespread, it is only normal for some cities to discuss jinn and their supernatural acts. On Nov. 7, Alforat TV prepared a report about a village in the city of Kut, where inhabitants claim that jinn are attacking it and burning its houses.

The report shows people running, startled because of the rising smoke from their houses, and shouting that it is the jinn’s doing.

In May 2014, the channel showed a long documentary titled "Magic in Cemeteries," depicting how magicians bury talismans among graves to harm some people.

Saleh al-Salihi, a professor in the sociology of religion at the University of Al-Qadisiyah, told Al-Monitor on Dec. 30 by phone from Al-Diwaniyah that this phenomenon has become widespread in Iraqi society in an unprecedented way. Salihi said that this is due to the increasing backwardness in Iraqi society, which is gripped by economic, cultural and civilizational poverty. Therefore, it is only natural for superstition to spread like fire. The less awareness people have, the more they seek magic and superstition to solve their problems.

Because of the lack of social awareness and the absence of laws addressing these phenomena, superstition, magic and sorcery are no longer limited to the modest and poor in Iraq but have permeated to other social circles as well. The phenomenon has even entered football pitches. Journalist Abdel Jabbar al-Itabi prepared a report in December 2013 in which he collected the stories of Iraqi athletes and coaches that practice magic and sorcery on Iraqi football fields. For instance, sometimes a player urinates on the ball before the game starts or casts spells on the opponent’s goal.

In February 2014, the news about investigators finding talismans and magic tools inside the Iraqi parliament went viral. Investigations showed that they were provided at the request of female parliament workers.

Salihi also told Al-Monitor that the phenomenon of magic and sorcery is supported by religious and political parties. He asserted that it is far from innocent, as some parties play on the ignorance of the people and spread superstitions to facilitate their manipulation and receive electoral votes. Salihi added that some religious parties are clearly and openly spreading superstitions in religious sermons and conferences. A television report shown on Al-Sharqiya TV went viral in April 2013. The report concluded that charlatans and magicians in Iraq gain popularity whenever Iraqi elections are imminent. Candidates visit them to increase their chances to win parliamentary seats.

Islam acknowledges the existence of jinn. The Quran states in several verses that jinn worship God just as the people do, and there is a Sura of the Quran, called Surat al-Jinn stating that the jinn read the Quran and worship God. Yet, it does not mention that the jinn interact in people’s lives in the way that magicians and some clerics claim. The latter exaggerate when saying that jinn live with people and share their lives and even their bodies. Sheikh Abdel Wahab al-Khalasi works at a mosque in Erbil in exorcising jinn from human bodies with the help of the Quran.

He speaks confidently about his ability to talk to jinn and order them to leave a sick person’s body or else they will die. Salihi told Al-Monitor that some clerics think that spreading these beliefs and metaphysical thoughts facilitate preaching religion itself. He added a new dimension to the issue, which is the commercial one. Working in this field constitutes a remunerating trade. Magicians, charlatans and people dealing with the jinn make a lot of money.

According to news media in Iraq, the prices of some animals and birds have increased because they are used for purposes of magic. On that note, the Alsumaria News Channel issued a report in June 2013 in which a snake hunter said that a specific type of snake costs $1,000 because it is in high demand in the world of magic. Moreover, an Iraqhurr report issued in May 2011 mentioned the prices of some animals and their organs that are most used by magicians.

Salihi said the first step to address this phenomenon is through educating people to understand religion scientifically and reasonably and to keep it far from superstition and metaphysics.