A teenage Palestinian girl has died while undergoing an exorcism, a widespread practice in Gaza's environment of poor government control and health education. 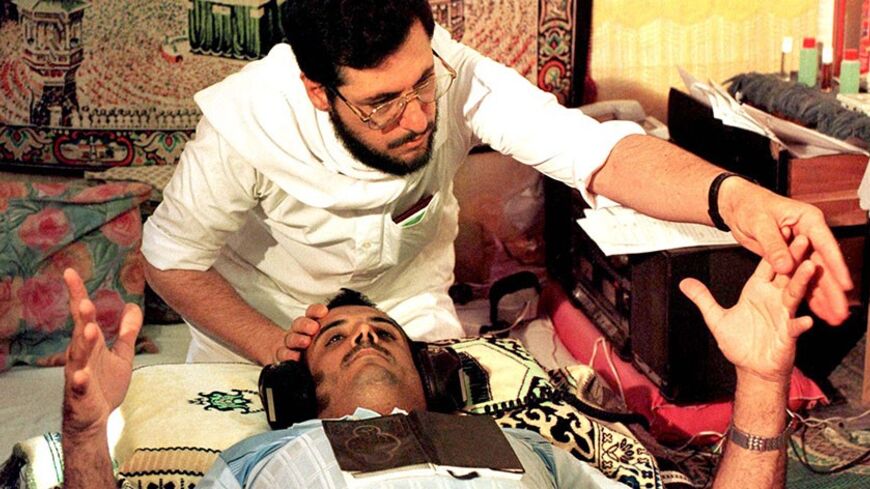 A Palestinian exorcist uses a Quran placed on a man's chest and readings from the Quran piped through earphones and honey to exorcise a demon from a patient, July 26, 1998. - REUTERS

GAZA CITY, Gaza Strip — “Are you a male or a female? A Muslim or a nonbeliever? If you are a nonbeliever, raise the index finger of your left hand. If you are a Muslim, raise the index finger of your right hand!” Sheikh Abu Harith screamed the words in Ghada’s ear as she lay in one of the beds in his clinic. He was talking to what he thought was a djinn, a supernatural creature in Islamic tradition, which was possessing her.

He placed a recording device next to her head that played Quranic verses, while her mother and brother stood next to her. Then, Abu Harith asked the djinn to leave Ghada’s body through one of the toes on her left foot. Indeed, her finger moved, though Abu Harith insisted that Ghada was not the one moving her finger, but rather the djinn controlling her body. The girl was still conscious and once she got out of bed, she was asked if she was OK and she nodded.

“I brought my daughter here because she has been constantly hearing words of apostasy and strange noises,” her family told Al-Monitor. They attended the so-called exorcism session of Ghada in one of the Islamic medicine clinics in Gaza City on the afternoon of Feb. 16. Ghada entered and left the clinic in good health.

She died in front of her family

However, not everyone is as lucky as Ghada. Israa Zourob, 17, died at the hands of one of these "therapists" on Feb. 2 in front of her parents and brother. Abu Khalil al-Zamili forced her to drink a liter of water mixed with half a kilogram of salt to expell the djinn that was possessing her.

Um Youssef Zourob, described the moment of her daughter’s death: “I do not know whether my daughter died of asphyxiation when [Zamili] was trying to make her drink salt water, or of salt poisoning. All I saw was that my daughter’s face turned blue as he shoved water and salt down her throat,” she recounted, tears streaming down her face.

“We bought him half a kilo of salt, which he dissolved in a liter of water in front of us after reading some verses. I do not think they were from the Quran, since he was talking in a fast and incomprehensible manner. He then asked her to drink the solution. When Israa complained of the salinity, he forced her to drink it with the help of her brother, and then she stopped moving,” Um Youssef added. The victim's father, Mahmoud Zourob, said, “My daughter suffered from health problems for several months and we did all kinds of medical tests, but no results appeared, and this is why we sought the help of the sheikh.” Weeping, he continued, “My daughter had many dreams. She wanted to become a doctor.”

Al-Monitor met with a police officer at the investigation department in Rafah. The officer said that nine months ago, the police warned the sheikh against practicing this kind of therapy, but he did not comply, leading to disaster. The officer noted that the sheikh holds a master's degree in "Sharia sciences." Al-Monitor tried to meet with the sheikh after he was arrested, but the police refused and ended the interview, noting that meeting him would require authorization from the police station in Gaza City. A police spokesperson in Gaza City, Ayyoub Abu Shaar, said that it is usually difficult for these sheikhs to open a clinic without a license, which requires certain conditions.

“The sheikh who was behind the death of the girl is being held for questioning. The public prosecutor’s office has presented overwhelming evidence against him, and he now awaits the court’s ruling,” said Abu Shaar. He explained that the police had already launched several crackdowns against these practitioners.

Zourob was not the first victim of spiritual therapy aiming to break magic spells or expell a djinn, according to a study conducted by the Palestinian Center for Human Rights. Sabira al-Athamna died of severe injuries after being beaten by a sheikh trying to force the djinn out of her. She was paralyzed and fell into a coma before her death in 1998. The study showed that Quranic therapy clinics and herbal medicine have spread to all the cities of the Gaza Strip. Visits to these clinics have become more common than psychiatric treatment. According to the study, these practices violate Article 3 of the Health Practitioner Law, which reads: “It is prohibited for any person to practice, pretend to or show readiness to practice medicine, whether directly or implicitly, unless authorized to do so.”

The Quran is not a book of medicine

Dr. Haidar Abu Sharekh blames a lack of health education and failed political intervention for the proliferation of medical practice by religious figures.

“I have treated at least three cases of bruises and wounds caused by severe beatings by these sheikhs under the pretext of expelling djinns and breaking magic spells,” he told Al-Monitor. He asserted that these sheikhs persuaded the patients that they are possessed by a djinn from the demon world, affecting them and their relatives and toying with their minds.

“Every disease, whether psychological or physical, needs to be diagnosed first before the patient receives any treatment or drinks anything. This phenomenon is rampant in the Gaza Strip, because of the failure of concerned parties to control it. Add to that the lack of health education, which makes the patient go to the sheikh before even heading to the hospital,” Abu Sharekh added. He believes that the solution to this problem requires concerted efforts by the Ministries of Health and Interior and media circles. He added that the Prophet Muhammad never said that the Quran was a book of medicine, but rather there are verses in the Quran promoting education and fighting ignorance.

Sheikh Abu Harith, whose clinic is not far from that of Dr. Abu Sharekh, said that he has no license for his clinic, given the absence of a law governing alternative medicine. Despite this, his clinic is well-known and always filled with patients, some of whom are government officials. He stressed the importance of experience, knowledge and controls when practicing this profession.

“There are some charlatans aiming to earn money or pretending to cure people by using the Quran, but the truth is that they are practicing sorcery and quackery,” he said. Regarding Zourob's death, he said that they usually make the patient drink water and salt to get them to vomit, so that the stomach expels the magic. But the sheikh treating the girl gave her too large a quantity of this solution, causing her to be poisoned and proving that he is ignorant and a charlatan.