US and Iranian negotiators met in Geneva to discuss a nuclear deal, though a new Republican-led US Congress might complicate a potential deal domestically. 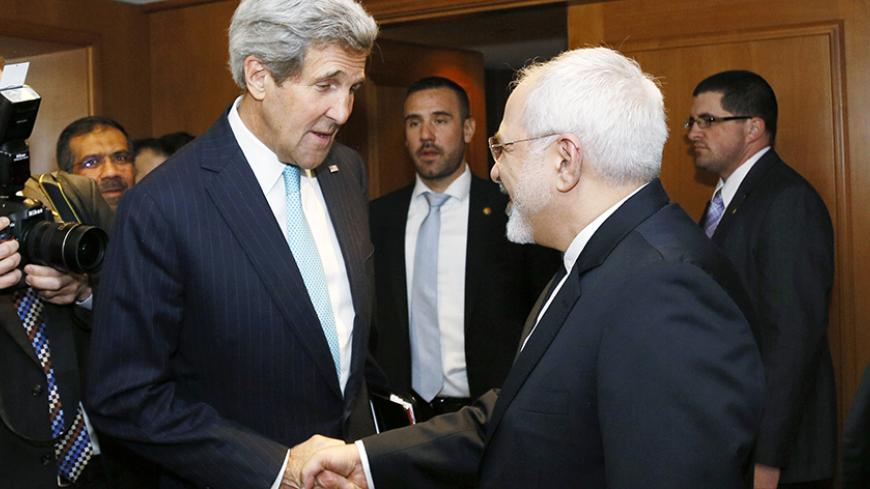 GENEVA — A new sense of urgency emerged as US and Iranian negotiators met for a second day here to try to advance a framework for a final nuclear accord, even as gaps remain on critical issues that still have to be overcome for any deal to be reached.

US and Iranian negotiators met at a Geneva waterfront hotel for over six hours Jan. 15, amid indications they are trying to draft a document they could present for discussion to other members of the P5+1— the five permanent members of the UN Security Council plus Germany — who are due to meet here Jan. 18. Iran and the P5+1 agreed in November to extend the negotiations until June 30, while trying to finalize a framework accord for the deal by March.

“We are not working on a 'draft' framework, but on the actual framework," a diplomat at the talks, speaking not for attribution, told Al-Monitor Jan. 15. “I think we will know in a few days” how much progress has been made.

While the talks have been “held in a serious and direct atmosphere, we are still far from a deal,” Iranian Deputy Foreign Minister Abbas Araghchi told Iranian journalists Jan. 14. It’s too “soon to judge the results of the talks.”

The consultations follow eight hours of meetings between US Secretary of State John Kerry and Iranian Foreign Minister Mohammad Javad Zarif Jan. 14 that included a rare 16-minute stroll by the two top envoys along the Geneva waterfront, accompanied by their security.

Zarif and Kerry may meet again when both are in Paris Jan. 16 for meetings with French Foreign Minister Laurent Fabius, Kerry said.

Both Kerry and Zarif expressed the hope that the US-Iran consultations this week in Geneva could help accelerate a final deal. Foreign ministers meeting with Zarif in European capitals Jan. 15 also stressed the urgency of finalizing the deal within the current time frame.

Both sides sense that the political atmosphere for prolonged negotiations is getting harder, especially in Iran and the United Sates, with the Republican take-over of Congress this month, and low oil prices putting renewed pressure on Iran’s economy.

"We cannot prolong the negotiations endlessly," German Foreign Minister Frank-Walter Steinmeier said at a meeting with Zarif in Berlin Jan. 15. We "must really use the newly opened time frame."

During a subsequent meeting between European Union foreign policy chief Federica Mogherini and Zarif in Brussels Jan. 15, Zarif and Mogherini “agreed that time cannot be wasted,” the EU readout of their meeting said.

“Negotiations have to be brought to a conclusion in line with the agreed time,” Mogherini said.

“The heat is rising in Iran … and in the US,” an official at the talks said, of the sense of mounting domestic political pressures narrowing space for prolonged negotiations.

But as yet, Iran’s Supreme Leader Ayatollah Ali Khamenei has not shown he is willing to authorize his negotiators to make the necessary compromises for a deal, former State Department Iran adviser Suzanne Maloney said.

“I know of no one … who thinks this is close to a breakthrough,” Maloney told Al-Monitor Jan. 14.

To date, “it is gob-smackingly clear that Khamenei is not prepared to compromise,” said Maloney, now with the Brookings Institution. “Maybe that will change, but it has not changed yet. … And maybe he just doesn’t have the confidence or the fortitude to do it.”