In light of physical assaults and abuses in the Gaza Strip and West Bank, some Palestinian journalists are avoiding sensitive political and security issues. 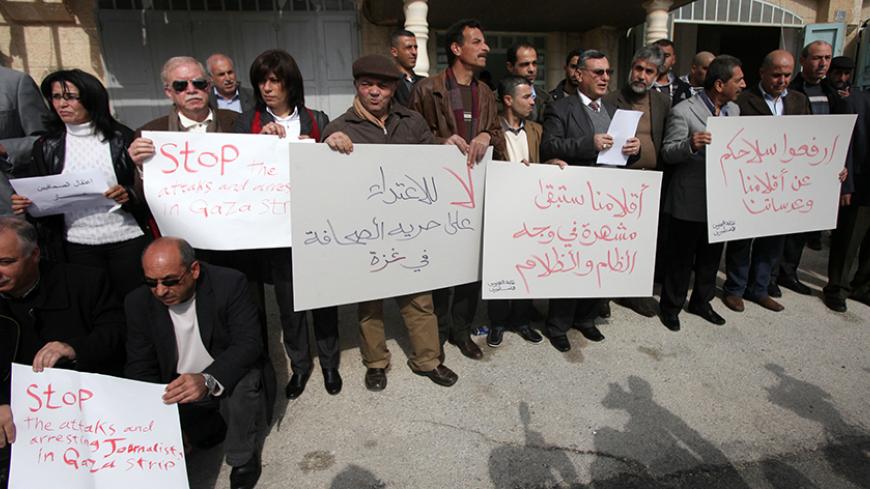 Palestinian journalists hold placards during a demonstration in support of reporters detained by Hamas in Gaza and to ask for their immediate release in the West Bank city of Ramallah, Jan. 27, 2013. - Getty Images/Abbas Momani

GAZA CITY, Gaza Strip — How loud is the voice you hear when you sit down to write a press report? How small is the prison cell you imagine yourself ending up in once you publish your article? The man you imagine pointing a gun at your head, is he wearing a mask? These are thoughts that lead one to delete the most important and powerful piece of information from an article. Some thoughts even lead you to delete the article entirely.

A late 2014 study by the Palestinian Center for Development and Media Freedoms found that 80% of Palestinian journalists in the West Bank and Gaza practice self-censorship of their writing.

Journalist Ghazi Bani Odeh, who conducted the survey, “The Official Media and Freedom of Expression,” told Al-Monitor that attacks and harassment, and thus fear of them, are the main causes leading journalists to censor themselves.

He told Al-Monitor, “There is no difference between the violations [against journalists] committed in the West Bank and those committed in Gaza, as journalists are equally suppressed, thus leading them to examine every word they write.”

The Internal Security forces under the Gaza Ministry of Interior sent young journalist Youssef Hammad a notice requesting him to appear at its headquarters Dec. 30, 2014. Hammad, who works for Al-Watan Radio and some local websites, told Al-Monitor of his visit: “They threatened me. They said it was the last warning and that if I ever criticize Hamas again in my articles, they will break my knees.”

Hammad said that previously he had received a notice from the Government Information Office run by Hamas. “They asked me about an investigative report I wrote about the conflict in mosques between Hamas and Islamic Jihad in Gaza. This shows that there is no freedom of expression or freedom of the press. There is no security apparatus in the world that believes in these freedoms,” he stated.

Hammad said he tries to resist censorsing himself, “But when I remember two years ago, when the security forces attacked me at a march [I was covering] and left me with a head injury, I control myself when I write. It’s a self-defensive reflex.”

Mohammed Othman, a freelance journalist who writes for Al-Monitor, was physically assaulted and threatened at the headquarters of the Popular Resistance Committees (PRC) on Jan. 5. According to Othman, he had published a report about the killing of people accused of collaborating with Israel during the 2014 war. After publication of the report on the web, which contained information provided by a PRC​ spokesman, the spokesman asked Othman to withdraw the statements. When he refused, he was assaulted. Othman said, “Due to pressure and fear for my safety, Al-Quds TV decided not to publish the video of the interview [with the spokesman] after I was attacked.”

According to the Skeyes Center for Media and Cultural Freedoms, in January there were three episodes involving journalists being detained by West Bank security forces and two involving Gaza security, in addition to two attacks in Gaza resulting from lawlessness. One of the latter incidents involved the journalist Maha Abu Omer, who was severely beaten by an unknown man while walking down the street.

Fathi Sabah, who writes for Al-Hayat, said that self-censorship is the name of the game for every Palestinian journalist. According to him, there is a policeman in the mind of every reporter in the West Bank or in Gaza.

“I think that self-censorship is constantly present when a journalist writes about domestic affairs and deals with sensitive issues such as family honor, incest, [social] division or political, administrative and financial corruption plaguing authorities and government departments and structures,” he told Al-Monitor.

Sabah said journalists practice self-censorship amid a great deal of frustration and despair, which sometimes curbs their desire to work. This raises the issue of the point of writing: What is the point if not to make an impact or contribute to changing situations for the better.

“Journalists here fear the threats of parties, officials and families given the absence of the rule of law, the lack of respect for human freedom and the spread of chaos and lawlessness,” Sabah said. He admitted that he practices self-censorship whenever he writes about certain issues related to the resistance, especially after he received several anonymous threats by phone and on Facebook, including death threats.

Khalil Shaheen, director of the Economic, Social and Cultural Rights Unit at the Palestinian Center for Human Rights, said that journalists in the West Bank and Gaza Strip have faced actual shootings and beatings, in addition to threats, throughout the eight-year Hamas-Fatah split, leading them to apply some sort of self-control in their work.

“They stop writing about sensitive issues, and they no longer pursue investigative journalism. Moreover, there is a kind of indifference because of fear of abuse, but there are rare journalists who have always rejected any tendency toward control for the sake of adventure,” he said.

Individual self-censorship might be a choice, but it is currently a pervasive type of control. It is so prevalent that journalists who do not censor themselves might be taken for troublemakers or nonprofessional journalists.