For a long time, Prime Minister Benjamin Netanyahu has avoided referring to Turkish President Recep Tayyip Erdogan’s attacks against him and Israel, but with the upcoming elections he has apparently decided to abandon his self-restraint policy to prevent being perceived as weak. 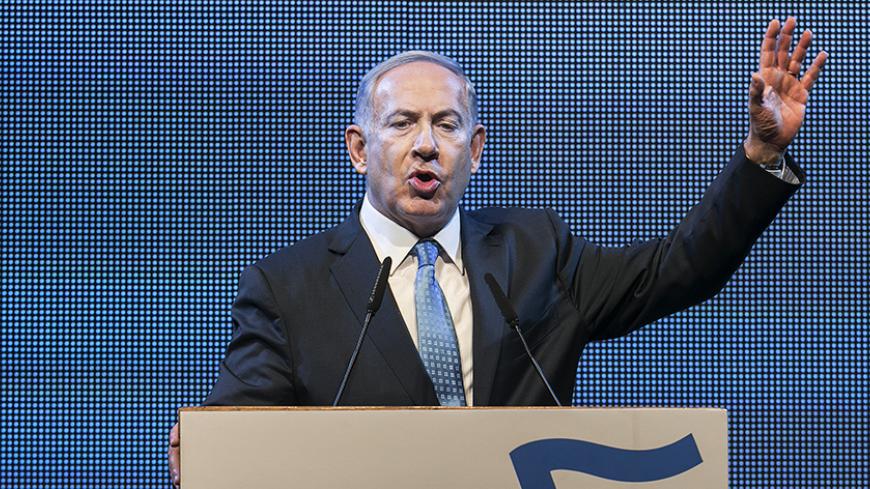 Israel's Prime Minister Benjamin Netanyahu gestures as he delivers a speech during the launch of his Likud Party election campaign in Tel Aviv, Jan. 5, 2015. - REUTERS/Baz Ratner

The election atmosphere that is starting to dominate Israel’s public discourse is having an impact on Prime Minister Benjamin Netanyahu’s approach to the Turkish arena. For a long time he maintained the vow of silence he imposed upon himself, and intentionally avoided referring to any outspoken comments about him or the State of Israel by Turkish President Recep Tayyip Erdogan. Now it seems as if Netanyahu has decided that continuing this policy of self-restraint could be perceived as weakness by the electorate, and that it gives his political rivals on the right materials with which to attack him.

Netanyahu initially held back when the Turkish president condemned his participation in the Paris anti-terrorism march Jan. 11, asking, “How can you see this individual who carries out state terrorism by massacring 2,500 people in Gaza waving his hand?” In contrast with Netanyahu, Foreign Minister Avigdor Liberman quickly reacted to Erdogan’s imagery and demagoguery. Speaking to a gathering of Israeli ambassadors, which took place in Jerusalem on Jan. 14, he called the Turkish president “an anti-Semitic neighborhood bully,” and spoke accusingly of how “the silence of the lambs of cultured Europe, politically correct Europe, toward … Erdogan and his friends, brings us back to the reality of the 1930s.”

It seems as if this aggressive rhetoric ultimately convinced Netanyahu that this time around he would no longer be obliged by protocol. For the first time in public, the prime minister used his meeting with members of the pro-Israel lobby American Israel Public Affairs Committee (AIPAC) to publicly denounce Erdogan’s comments and disassociate himself from them. Netanyahu even tied the “required” condemnation in with the war on terrorism, emphasizing this by saying, “I think the war against terror will not succeed if it´s founded on hypocrisy.”

It was no coincidence that Netanyahu chose his meeting with AIPAC to respond to Erdogan’s attacks. A senior diplomatic official in Jerusalem told me, “The new Congress that will be sworn in this week in Washington is a lot less friendly to Turkey than any of the other congresses that were elected recently.” The statement implied a threat as well, since on April 24 of this year, Armenians around the world will mark the 100-year anniversary of the “Medz Yeghern” (Great Crime), the genocide they claim the Ottoman Turks committed against the Armenian people.

This year, as every year, the US president and Congress will be asked to debate the sensitive issue of recognizing the Armenian genocide. For many years, Israel used AIPAC to prevent Congress from recognizing this genocide, all as a token of Israel’s friendly relationship with Turkey. In discussions now being held in Jerusalem, however, there are those who believe that it is time to remove the gloves and spearhead a response that will embarrass Turkey in the international arena.

Meanwhile, the statements by Netanyahu and Liberman have hardly caused Turkish officials to tone down the rhetoric, and the rift between the two heads of state is only growing deeper. The Presidential Palace in Ankara is frustrated by the fact that the Israeli prime minister has delayed the completion of the reparations agreement over the killing of Turkish activists on board the Mavi Marmara for more than a year now. The agreement is supposed to formalize relations between the two countries and lead to the exchange of ambassadors. Senior Turkish officials spoke out in favor of the agreement last year on more than one occasion, which is yet to be approved by Israel.

For its part, Turkey has been increasing its support more and more for the Palestinians. Palestinian President Mahmoud Abbas is a regular guest in government palaces throughout Ankara, and the head of the political bureau of Hamas, Khaled Meshaal, who was asked to leave Qatar, at least according to reports in the Arab media, is a welcome guest in Turkey as well.

Netanyahu’s comments about radical Islam after the wave of attacks in Paris, and his call for Europe to stand beside Israel in its war against Islamic terrorism, figured prominently in the Turkish press.

Meanwhile, Europe has intimated its dissatisfaction with Netanyahu’s remarks and with the linkage he makes between the threats faced by Israel and those faced by Europe. These remarks are perceived in Europe as an attempt to avoid a discussion about the Israeli occupation. At the same time, Europe is also choosing to ignore Erdogan’s verbal assaults on Israel, while he continues his increasingly extreme rhetoric. Turkish Prime Minister Ahmet Davutoglu accused Netanyahu of various provocations, from the killing of innocents in Gaza to the use of violence against Muslims in Jerusalem and the Temple Mount. This, he claimed, was what was causing Muslims to become extremists.

Ever since the 2009 Davos incident, in which he attacked former Israeli President Shimon Peres and especially since the 2010 Mavi Marmara flotilla events, Erdogan has been using the protection he has afforded to the Palestinians to position himself as the defender of the entire “Islamic people,” the ummah — that religious entity transcending national boundaries, once headed by the Ottoman sultan. To relay this message, he organized a photo session with Abbas on Jan. 12, with the two men standing before a grotesque formation of 16 soldiers dressed as janissaries, or the sultan’s bodyguards, in the uniforms of the 16 empires run by the Ottoman Turks throughout history.

As someone who perceives himself as a successor to the sultans, Erdogan allows himself to attack Europe too, even if he is still trying, at least formally, to be accepted into their union of nations. That is not enough to stop him from accusing Europe of Islamophobia and racism.

Nor was Erdogan pleased with the special issue of Charlie Hebdo mourning the tragic event. In fact, the Turkish president was the first to attack the issue as a provocation deserving of punishment, and to demand in the name of all Muslims, “an attitude of respect to the Prophet Muhammad.”

Despite Israel’s protests and complaints, both public and through acceptable diplomatic channels, the Turkish president and his prime minister continue their outspoken assaults on Israel, in ways that are often reminiscent of the behavior and language of former Iranian President Mahmoud Ahmadinejad.

Immediately after the march of world leaders in Paris, a senior official in the Israeli prime minister’s entourage told me that Netanyahu didn’t even consider shaking hands with Abbas, who was originally positioned just two world leaders from him. “His unilateral appeal to the Security Council and the International Criminal Court in The Hague eliminated any possibility for dialogue,” he said. When I asked him about a handshake with the Turkish prime minister, who was also in the first line of marchers, the same senior official answered that the chances of that happening were “even less.”