Egyptian news recently reported that the Transport Ministry will increase the price of a metro ticket by 2,500%, which activists consider extremely unfair. 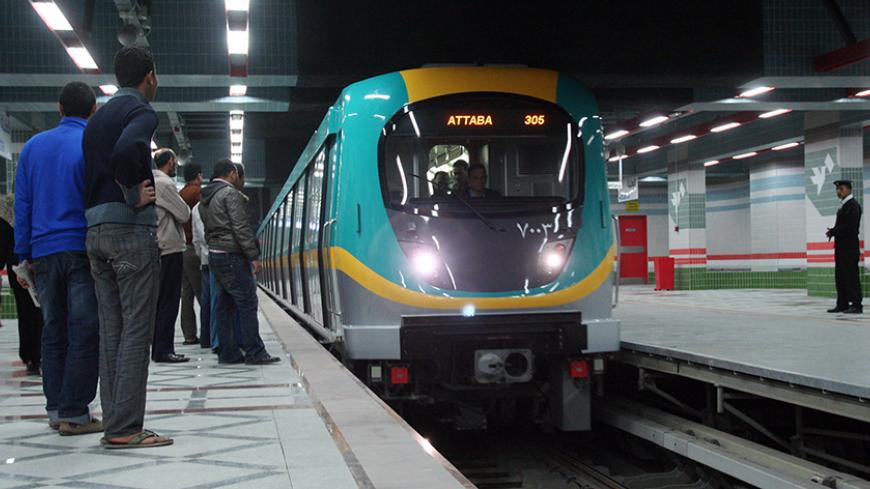 Passengers are seen waiting for the arrival of the train at a station on the new metro line in Cairo, which opened on Feb. 21, 2012, linking the central Ataba district with the suburb of Abbasiya, two of the Egyptian capital's busiest neighborhoods. - Getty Images

CAIRO — According to various news sites, Egyptian Minister of Transport Hani Dahi announced at a press conference on Dec. 29, 2014, that the fair price of a metro ticket, which currently does not generate any profits for the ministry, should be 25 Egyptian pounds ($3.40) instead of the current price of 1 Egyptian pound (14 cents).

The statements concerned social media activists as to the probable price increase of up to 2,500% and prompted some of them, namely Samar al-Mehdi, Eslam Hammam and Ehab Abdallah, to launch a campaign called, “The Uprising of the Poor's Metro” on Dec. 30, 2014. This campaign called for a peaceful sit-in to be held on the same day the state announces the rise of metro ticket prices, regardless of the rate of increase.

Mehdi told Al-Monitor that the Ministry of Transport has many alternative solutions to avoid increasing ticket prices — it could rent indoor advertising screens, for instance.

She criticized the Egyptian Company for Metro Management and Operation’s irrational expenditure, which the "Uprising of the Poor's Metro" also criticized. The campaign shared the news that was reported by Egyptian news sites, according to which the head of the Egyptian Company for Metro Management and Operation, Ali Fadali, said that the company hired two people and paid them 60,000 Egyptian pounds ($8,164) per month, to ensure as many passengers per train as possible to avoid overcrowding metro stations.

As a result of the angry responses to the news that spread online, the Middle East News Agency reported that the transport minister denied in a statement what was published by newspapers and news sites on the metro fare increase to 25 Egyptian pounds, and described these allegations as mere rumors aimed at causing public unrest.

An editor-in-chief specialized in covering Transport Ministry affairs at an Egyptian news site told Al-Monitor on condition of anonymity that he attended Dahi’s press conference, and that he said the ticket’s fair price should be 25 Egyptian pounds.

As a result of the conflicting statements by the minister, Mehdi said that the campaign’s activists will submit a notice to the attorney general against Dahi, considering him the one who “circulated the rumors that caused unrest, by saying that the ticket’s fair price should be 25 Egyptian pounds.”

Mehdi added, “Talks of this kind — about the 25-pound metro ticket price — happened in the past when officials announced on Dec. 14, 2014, that the fair price of tickets should be 8 pounds, which does not help the Egyptians’ [financial] situation. These conflicting figures that emerge now and then confirm that the officials are not telling the truth.”

A source within the metro company told Al-Monitor the number of metro passengers ranges between 2.5 million on Fridays and Saturdays and is up to 4 million passengers on weekdays. Some officials at the Transport Ministry and metro company confirmed these figures in previous statements.

The metro company is state-owned, falls under the management of the Egyptian Ministry of Transport and is in charge of managing the metro lines.

The same source told Al-Monitor that metro passengers are divided into two categories, each representing nearly 50% of passengers (at least 1.25 million passengers on Fridays and Saturdays, and at least 2 million passengers on weekdays). The first category consists of passengers who use a single journey ticket, allowing them to travel on any of the three metro lines and through any station for 1 Egyptian pound. The second category consists of those using a smart card that is issued quarterly and the price of which is further subsidized — there are several packages for smart cards depending on the number of metro stations or the passenger’s job, for instance, and it allows passengers to travel through a limited number of stations.

Economic expert Farag Abdel Fattah told Al-Monitor that to determine the ticket’s fair price, the metro losses should be divided by the number of passengers. The result is the increase value that must be added to the ticket price.

Assuming that the rise will only cover tickets, not smart cards, the value of the price increase — which would cut the metro’s losses according to this year’s statistics — will be the result of the following equation: dividing the metro daily loss, which is estimated at 500,000 Egyptian pounds ($68,019), by the number of passengers who use tickets (estimated at least at 1.25 million passengers). This means that the increase will be nearly 40 piasters, and that the price following the rise will be 1.4 Egyptian pounds (19 cents).

It is worth mentioning that Mohammed al-Shahat, a media adviser to the transport minister, told Al-Monitor that the ministry has submitted two proposals to the Cabinet on the new price of the metro ticket. A source within the Transport Ministry told Al-Monitor that the first proposal consists of dividing the ticket price into segments, starting with 1.5 Egyptian pounds (20 cents) and ending at 3 Egyptian pounds (41 cents), depending on the number of stations traveled through. He added that the second proposal consists of unifying the ticket price at 2 Egyptian pounds (27 cents).

Ahmed Abdel-Hadi, the media spokesman for the metro company, told Al-Monitor that the metro company has not yet received any instructions to raise the ticket price from the Transport Ministry.

The statistics on the number of passengers and the size of the losses — which were announced by the Transport Ministry and the metro company — suggest that the state does not need to increase the ticket price to 2, 8 or 25 Egyptian pounds nor divide the price into segments, and that the increase that cuts the metro’s losses will not exceed a maximum of 40 piasters, as a unified raise to travel through all stations.

This is contrary to the solutions offered by the "Uprising of the Poor's Metro" campaign (renting indoor ad screens), which may be a substitute for the increase of ticket prices. The danger of the decision to raise metro fares resides in the fact that it affects the means of transportation of 4 million citizens, which is their only alternative in light of the increase of fuel prices in October 2014. In addition to this critical situation, statements about a rise of 2,500% and 800% were published and made things worse — it “will lead to a hunger revolution,” Fattah said.