The Cairo metro system owes vast sums to electrical, water and maintenance companies, and this week's move to double the price of a ticket to about $0.11 a ride isn't enough to solve the debt problem. 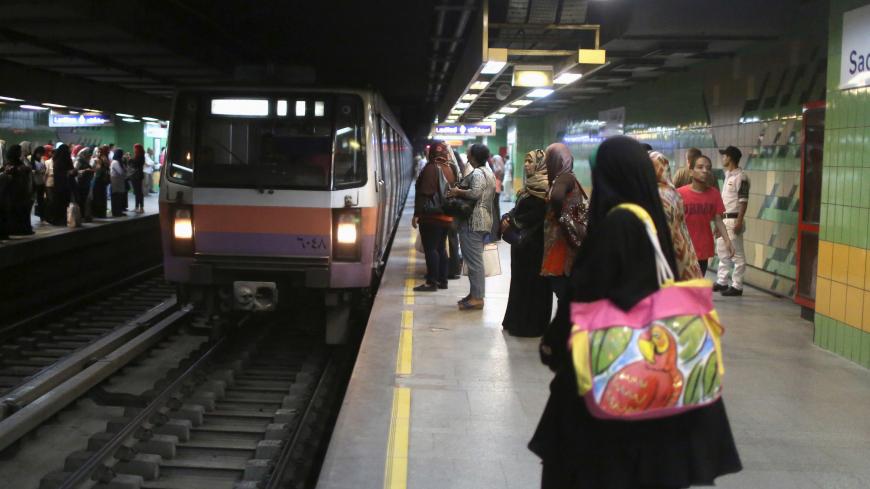 Commuters are seen inside the Sadat metro station underneath Tahrir Square in Cairo, June 17, 2015. - REUTERS/Asmaa Waguih

The specter of accumulated debts is haunting Cairo’s metro, putting Egypt's most popular means of transportation in jeopardy.

Hit by a severe cash crunch, the state-run Egyptian Company for Metro Management and Operation failed to pay huge water and electricity bills worth about 300 million Egyptian pounds ($16.6 million) for the past 18 months. Compounding the problem is that water and power companies have warned that they will halt their services if these bills are not paid. Between the hammer of these outstanding debts and the anvil of hefty annual losses, the three-line metro network is struggling to curb its budget deficit.

Metro spokesman Ahmed Abdel Hadi said the company owes 260 million pounds in electricity bills and 40 million pounds in water bills. He said the utilities have warned that they will undertake legal procedures against the metro company if the bills are not paid.

The metro company also owes money to maintenance, cleaning, security and spare parts companies. Abdel Hadi said ThyssenKrupp, a leading German industrial group in charge of maintaining the metro stations' elevators and escalators, has refused to renew its contract with the metro company until it receives payment. He said some elevators and escalators might become nonoperational under these circumstances.

He noted the metro is also plagued by continued losses due to the vast difference between what a ticket costs the customer and what each trip actually costs the company.

The issue of increasing metro ticket prices has sparked a heated debate in recent years. The metro ticket is subsidized by nearly 96% and until this month, its price had not changed since 2002, despite the pound's major decline against the US dollar. The transportation minister in 2014, Hani Dahi, said the metro company's annual loss was 180 million pounds; since that time, the pound has lost half its value against the dollar. Recent Transportation Ministry statistics show the metro's annual loss is around 250 million pounds.

The transportation minister in 2016, Galal el-Saeed, said ticket prices should be raised to ensure the continuation of this vital service. Prime Minister Sherif Ismail also said last year that the price of metro tickets is too low to cover operational costs. On March 23, the Cabinet approved doubling the ticket price. Transportation Minister Hisham Arafat said the ticket price will increase to 2 Egyptian pounds (about $0.11) to help offset the metro's annual losses.

Some economic experts said increasing ticket prices is not a magic wand that will solve the problem, pointing out that bad management is another key reason for the miserable economic situation of the Cairo metro. Economic expert Rashad Abdo told Al-Monitor, "Administrative failure is one of the main reasons the Cairo metro company is in the doldrums. The whole administrative system should be updated. The company should rely on [outside] experts to reach creative and sound solutions. Merely talking about increasing prices whenever faced by any economic hurdle is an indicator of bad management and a lack of future vision."

Abdo said halting metro service is not an option, as it would paralyze the whole country. He said increasing ticket prices is just a partial solution. "This issue mainly stems from the socialist economic approach adopted by former President Gamal Abdel Nasser [in office from 1956-1970]. Socialism gives the social aspect a top priority at the expense of the economic one. Therefore, many public services are heavily subsidized by the state. But this does not mean that such subsidies should be completely lifted to cope with economic challenges. There should be detailed studies about the country's and citizens' economic conditions to reach a compromise," Abdo noted.

Metro tickets are subsidized in many countries worldwide, the expert said, and the subsidy percentage often can be amended without severely harming citizens' pockets.

The Cairo metro went into operation in 1987 and was the first of its kind in Africa and the Arab world. The metro has a daily ridership of more than 3.5 million. The fourth line is scheduled to be inaugurated by 2019-20.

The lack of financial resources is considered the main obstacle hampering the progress of the metro system. Adding to its debt problems, the metro company reportedly got a loan of 10 million pounds from the Egyptian Railway Authority to pay workers' salaries.

Trying to find a way out of this predicament, member of parliament Mohamed Fouad submitted a parliamentary motion calling on the transportation minister to immediately provide the company with 30 million Egyptian pounds as a temporary solution to ensure the normal operation of the metro system.

Saad Teima, the head of parliament's Transportation Committee, told Al-Monitor that the panel is planning to hold an urgent session with the transport minister to discuss possible solutions. "We will also meet with many officials at the metro company and the railway authority to listen to their problems. These sessions will help the committee determine the root causes of these accumulated debts," Teima said.