Cordial relations between Egypt and Morocco have been hampered by a media brawl between both countries’ official TV channels, as Egypt moves closer to Algeria. 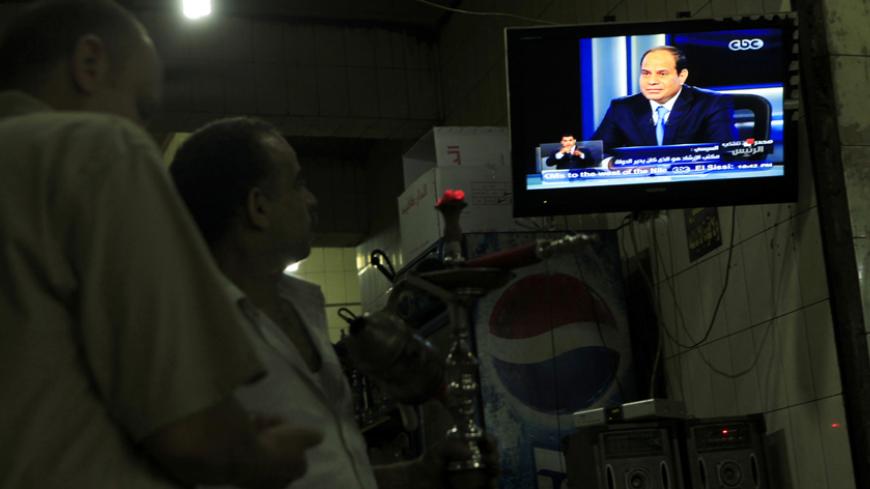 People watch a television interview broadcast on CBC and ONtv with presidential candidate and Egypt's former army Chief Abdel Fattah al-Sisi, at a cafe in Cairo, May 6, 2014. - REUTERS/Amr Abdallah Dalsh

CAIRO — Egypt and Morocco have special relations on all political, cultural and media levels, and their political relations are marked by understanding and continuous coordination on international issues. However, lately, there has been an unprecedented media brawl between the two countries. Things exacerbated after official Moroccan media channels issued two reports describing the June 30, 2013, events in Egypt as a coup.

The Moroccan media reports were a reaction to similar stances from Egyptian media. It all started when Egyptian anchorwoman Amani al-Khayat lampooned Morocco on Egypt’s ONtv. Khayat said that Morocco’s economy was based on prostitution and that its people were among the most affected by AIDS, under the auspices of the Islamic rule represented by the Moroccan Justice and Development Party — an extension of the Muslim Brotherhood.

Right after the live show had been broadcast, Khayat took back her words, which stirred Moroccan public and official anger. It is noteworthy that the family of Egyptian businessman Naguib Sawiris who owns the channel has huge investments in Morocco, which were jeopardized by the incident.

This incident is among the most remarkable in a series of slips by Egyptian reporters and artists that Morocco considers unacceptable and offensive to the Moroccan people. In early 2015, Moroccan official television surprised everyone with two heated reports that perplexed many analysts. The first report was shown on Aloula TV and tackled the security chaos in Egypt post-June 30, 2013. It also described Gen. Abdel Fattah al-Sisi as the coup leader.

Another report was shown on the 2M Maroc TV channel and addressed the Egyptian tourism crisis. The report stated that the tourism crisis exacerbated after the electoral legitimacy was undermined and the army staged a coup against the then-elected President Mohammed Morsi.

However, these reports left analysts confused because Morocco participated in officially ordaining Sisi after he won the presidential elections. In addition, Morocco voiced its support for Sisi’s road map. For 1½ years, since June 30, Moroccan TV has not mentioned the word “coup.” The change in editorial policies of official Moroccan state channels could not possibly be an unintentional mistake. It is well-known that the official national channels are affiliated with the Moroccan royal palace and the reports they air are written and approved in advance.

If an unintentional blunder slipped in the first report, why did the second report have the same insinuations? Moreover, the timing of the report’s showing was quite significant, as it was shown following Moroccan King Mohammed VI’s visit to Turkey, which is considered the main enemy of the current Egyptian regime.

There has also been a remarkable rapprochement between Egypt and Algeria. This stirred Morocco’s fears that Egypt might recognize the Polisario Front, which was seeking to achieve independence for the Moroccan Sahara region, with the strong support of Algeria.

Egyptian media had published reports about the Tindouf refugee camps in Algeria, where refugees from the Western Sahara and leaders of the Polisario Front live. These reports coincided with Sisi’s visit to Algeria and the visit of an official Egyptian delegation to these camps for the first time. The delegation was led by the undersecretary of the Ministry of Culture, and the visit included a meeting with the head of the Polisario Front, Mohamed Abdelaziz. Morocco considered these steps as part of the new regime’s intention to support Algeria’s influence in North Africa at the expense of Morocco.

Egyptian media quickly accused the Muslim Brotherhood of being responsible for the reports in question. However, a leader in the Justice and Development Party, Khaled al-Rahmouni, denied the statements. He said, “There is no way to contact the Muslim Brotherhood to stir a crisis between Egypt and Morocco, as the group does not exist in Morocco,” adding that the Egyptian media used this story as a pretext.

Moroccan hackers, who call themselves the “Moroccan Deterrence Force,” hacked the electronic portal of the Egyptian Al-Wafd newspaper and posted a picture depicting the meeting of Mohammed VI with Turkish President Recep Tayyip Erdogan during the king’s vacation in Istanbul. They posted a message attacking the Egyptian media for insulting the Kingdom of Morocco. The hackers asserted that they hacked the Egyptian newspaper’s website because it had published only a few days earlier a map of Morocco without the Western Sahara, which is an area of dispute with the Polisario Front that unilaterally proclaimed the Sahrawi Arab Democratic Republic. The hackers considered this move as deliberate provocation. They left a message on Al-Wafd’s website, threatening to hack several remarkable Egyptian websites. Then, they accused the Egyptian regime of staging a coup.

Although official Moroccan television is subject to the official policies of the state, when the Egyptian-Moroccan media crisis reached Morocco’s parliament, member of parliament Rashida Bin Masoud accused Moroccan state television of broadcasting reports about the situation in Egypt, leading to media clashes between Egypt and Morocco. Meanwhile, Mustafa al-Khalfi, minister of communications and official spokesperson for the government, defended himself, saying that he does not interfere in the editorial policy of state television.

The media bickering between Morocco and Egypt is moving toward resolution due to the nature of their political interests. On the one hand, Morocco does not want to be secluded from the Arab world and does not want enmity with the current Egyptian regime, which is supported by the Gulf Cooperation Council, neither does it want to give Algeria a golden opportunity to spread its influence in North Africa. On the other hand, Egypt does not want to give the Muslim Brotherhood an alternative home in Morocco instead of Qatar, which was hugely pressured by Saudi Arabia and the United Arab Emirates to give up its direct support for the group in Egypt.