Saudi Arabia beheadings in stark contrast with fight against IS

Saudi Arabia's human rights record of public punishments and criminalization of dissent finds its roots in the Al-Saud ruling family's "contract" with Wahhabism. 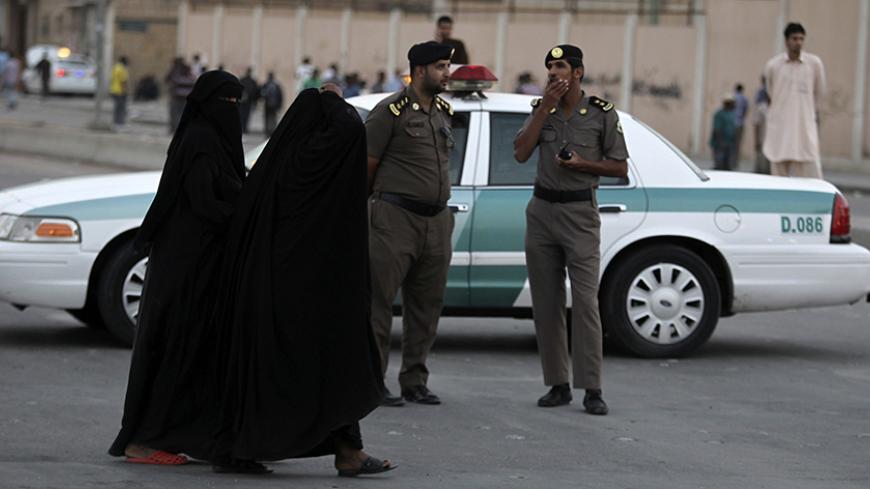 The injustices of the Saudi justice system came to the forefront twice in one week. Lashing liberal blogger Raif Badawi and publicly beheading a woman convicted of murdering her stepdaughter were carried out in the name of Islam by a regime that is so desperate to flaunt its Islamic credentials now that there are other emerging so-called Islamic states around the region. The regime has cooperated with the international alliance against the Islamic State (IS), but while adopting IS' mode of punishment.

This is the irony of having Saudi Arabia on board as an important partner in international efforts to destroy IS and combat terrorism. It is rather puzzling to say the least for the alliance to cooperate with a regime against the other when the two have so much in common. Both Saudi Arabia and IS seem to cherish public display of executions and other forms of torture. There may be a twisted logic behind the international alliance with Saudi Arabia against IS. The alliance may eventually ensure that there is only one legitimate, sovereign and internationally recognized country in the Arab region where public beheadings and other forms of physical punishment are normal practices that are beyond criticism.

On Jan. 9, Badawi, the liberal Saudi blogger convicted of insulting religion and criticizing religious scholars, received 50 lashes in public as part of a total of 1,000 lashes, 10 years in jail and a fixed fine. His second session of lashing was due the following Friday but it was canceled at the last minute. He was deemed medically unfit to receive the weekly 50 lashes, which were to last for 20 weeks. It was not clear whether his case would be reconsidered by the courts. However, reviews of court cases are not always good news: On Jan. 12, human rights lawyer Walid Abu al-Khayr had his sentence increased from 10 years to 15 years after the review process.

Since Badawi’s first lashing session, a truly global solidarity campaign in support of freeing him was begun by activists in Washington, London, Paris, Berlin, Tunisia and other countries coordinating their protest. The most spectacular protest took place in Washington, where Saudi activists carrying canes and inflicting pain on others simulated the public lashing drama. The protesters identified the key personality behind such severe sentences as Minister of Interior Prince Mohammed bin Nayef and denounced the Saudi court that sentenced Badawi.

Among other countries, the United States and Britain expressed concern over the severity of the sentence and called upon King Abdullah to order a review of Badawi’s case. Such statements were issued to defuse criticism and calm local constituencies who were baffled by their governments’ silence over Saudi Arabia’s abysmal human rights record, not to mention the hypocrisy of Saudi Arabia when it sent a representative to the Charlie Hebdo march in Paris on Jan. 11 in support of freedom of speech. Many critics and human rights organizations pointed to the hypocrisy of both Western governments and the Saudi regime, the latter for supporting freedom of speech abroad and restricting it at home.

The second case was a more sinister drama of public beheading. The victim this time was Layla Bint Abd al-Mutalib Basim, a Saudi woman of Burmese origin who lived in Mecca and who was convicted of torturing and killing her 7-year-old stepdaughter. Veiled in black from head to toe and with a rope around her neck, the woman was dragged by security police to the side of the road and made to sit down with a policeman holding the rope, while the executioner carrying a sword waited for her to stay still so that he could sever her head. This took a while because the woman was hysterically moving her limbs and shouting loudly, "I did not kill! … I did not kill! I will never forgive you!" clearly indicating that she was not sedated prior to the execution and did not confess to killing her stepdaughter.

A security man secretly filmed this horrific beheading and circulated the video on YouTube. One can only imagine the impact of the execution spectacle on her relatives and young children. Basim was the ninth person to be beheaded since the beginning of 2015. The Saudi government issued a statement that it identified the policeman who filmed and circulated the beheading scene and announced its intention to punish him. But one can only ask why beheadings take place in public. Perhaps the regime prefers that only Saudis watch beheadings; a widely circulated video can be an embarrassment. Under the pretext of protecting the feelings of the relatives of the beheaded woman, the Saudi authorities ordered an investigation into the filming of the event.

The Saudis claim to rule according to the revealed message of Islam. Lashing, flogging and beheading are considered prescribed forms of punishment above any debate or reinterpretation. Although there are hundreds of Muslim countries around the world applying Sharia, at least in some aspects of public and personal life, we find that only in Saudi Arabia and other territories where radical interpretations of Islamic law persist that public aspects of punishment turn Friday noon prayer — when such punishments are usually performed — into a spectacle of violence. This public violence is meant to intimidate audiences and spread systematic fear among a coerced population. In the areas under the control of IS in Syria and Iraq, Boko Haram in Nigeria and the Taliban in Afghanistan such punishments have become notorious. Saudi Arabia is trying to appease an agitated domestic constituency that is questioning — albeit privately — the participation of the regime in the bombing of IS and its cooperation in the international alliance against it.

The Saudi reaction against these public punishments is difficult to assess in a country that stifles debate about such important and sensitive issues. There is no doubt that a considerable constituency conditioned to believe the myths of the regime — especially those that glorify its commitment to Islam — will cheer when they see such public punishments performed by the state and its policing agencies. In their opinion, it is in the name of God and security (i.e., public interest) that such severe punishments are carried out in public, and therefore they are necessary for upholding religion and peace.

Saying that such punishments are prescribed in Islamic law silences any attempt to reconsider and reinterpret the law by going back to the principles of Sharia, above all justice and the preservation of life in this world. There is an emerging small minority among Saudis who regard such punishments as unsuitable for a modern state and judiciary. Excessive public executions are not only for murderers, but are also punishment for convicted sorcerers, homosexuals, prostitutes, drug addicts and dealers.

The problem of the Saudi justice system stems not so much from a generic Islam that exists outside history and context, but lies in the Saudi interpretation of the law. This interpretation is carried out by judges who are graduates of Imam Muhammad ibn Saud University in Riyadh, a bastion of Wahhabi dogma that seeks to stifle legal diversity within Islam. The second problem lies in the subservience of the judges to the Ministry of Interior and its head, Nayef. He and his father before him, Prince Naif, used this ministry as another arm of the coercive machinery of the state, criminalizing any form of dissent and widening the circle of acts that are increasingly defined as severely punished crimes.

The ministry has a wide range of Wahhabi loyalists such as judges, preachers, religious police and teachers on its payroll. Every now and then, the ministry needs to assure them that it remains faithful to the original contract between the Al-Saud family and the Wahhabis. The contract stipulates that the state must abide by the religious interpretations of the Wahhabis. In return, the latter must work hard to domesticate the population and ensure its submission to royal power. The court is but one place where they can make sure that peaceful dissent is silenced in prison, lashed or flogged in public.

What happened to Badawi and Basim must be seen in this context of two partners assuring each other of their commitment to the original contract, despite competition from other contenders to the Islamic state. These severe public punishments leave a lot to be desired when Saudi Arabia presents itself as a defender of free speech and an important ally against terrorism.