IS threat led to closure of Western embassies in Egypt

The Islamic State has sent Egyptian members back to Egypt to plan attacks against foreign interests in the country, prompting the United Kingdom and Canada to close their embassies. 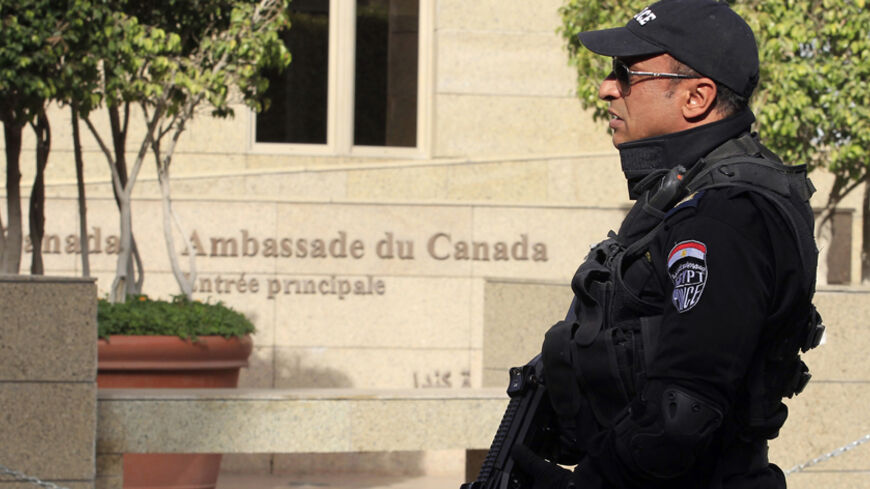 An armed police officer is deployed in front of the Canadian Embassy in Cairo, Dec. 9, 2014. - REUTERS /Mohamed Abd El Ghany

EL-ARISH, Egypt — The United Kingdom reopened its embassy in Cairo today, more than a week after it, along with Canada, closed its mission. The decision by the United Kingdom and Canada to close their embassies — on Dec. 7 and Dec. 8, respectively — raised many questions in Cairo regarding the reasons behind these measures. The UK Foreign Office still warns that there is "heightened threat of terrorist attacks globally against UK interests and British nationals from groups or individuals motivated by the conflict in Iraq and Syria," and specifically names Ansar Bayt al-Maqdis in the Sinai Peninsula as a threat.

But what is really behind the timing of the closing of the embassies and warning against traveling to Sinai?

A sheikh from Sinai, who is close to the Egyptian intelligence services, told Al-Monitor, on condition of anonymity for security reasons, “The first warnings came from the Israelis in mid-November. Israeli intelligence told its Egyptian counterparts that it had discovered information about terrorists in Sinai planning to abduct foreign nationals and carry out terrorist operations in South Sinai and Cairo.”

Al-Monitor has indeed observed unprecedented security measures adopted by the Egyptian government in the South Sinai governorate and on all roads connecting other Egyptian governorates, especially those leading to North Sinai from which terrorists have previously launched their terrorist operations.

The army and civil police have stationed military vehicles and forces on all roads connecting South Sinai to North Sinai, turning the area into a military zone where civilians undergo careful, individual inspection with some being randomly arrested.

A source who works in the tourist sector in South Sinai told Al-Monitor, “When you travel 1 kilometer [.62 mile] on the road from [el-] Arish to Taba you encounter a checkpoint where you are subjected to individual inspection and are treated with suspicion. Imagine having to go through all this on a road that is longer than 250 kilometers. Passing through this is even harder for us than traveling to the United States!”

The tight security measures have not only been limited to the main roads. Security forces threatened drug smugglers and traders, who control the valleys and complex desert roads in South Sinai, with additional sanctions in the event that they allow terrorists from North Sinai to pass through. A drug smuggler told Al-Monitor on the condition of anonymity, “An officer told me that if they see a shadow near the valleys, we wouldn’t even be able to sell tomatoes in this country.”

On Nov. 25, Israel reiterated its warnings of attacks and kidnapping by publicly calling on its nationals to immediately leave Sinai in anticipation of terrorist attacks against them. In this context, a researcher on security affairs and jihadist groups in Sinai told Al-Monitor, again on condition of anonymity for security reasons, “The decision-makers take Israel’s warnings very seriously, especially when it comes to terrorist operations in Sinai and Egypt.”

“Israeli intelligence services have up-to-date information regarding the terrorist movements in Sinai based on information gathered from inside Sinai through a network of spies planted within terrorist groups, as well as through monitoring the terrorists’ phones and wireless devices. This is possible since they are using the Israeli networks instead of the Egyptian ones, because these have been cut off due to the Egyptian security measures,” he added.

Western embassies appear to have taken such threats seriously. This became clear through the warnings expressed by the British Embassy on its website on Dec. 9, explaining that “closing the embassy in Cairo was due to threats of terrorist attacks globally against UK interests and British nationals by groups and individuals motivated by the conflict in Iraq and Syria.” The embassy also added in its statement: “We need to be vigilant at this time since terrorists are still planning to carry out attacks in Egypt and such attacks could happen without previous warning.”

A source close to jihadi groups in the border area between Sinai and Israel told Al-Monitor on condition of anonymity, “The concerns expressed by the Western embassies in Egypt were the result of Ansar Bayt al-Maqdis’ pledge of allegiance to IS, especially after [they announced moving] operations to the center of Egypt, in Cairo.”

“Abu Bakr al-Baghdadi, the leader of IS, instructed Ansar Bayt al-Maqdis in Egypt to carry out attacks against the embassies, nationals and interests of the countries participating in the international coalition against IS. These attacks started with the bombing of pipelines of gas exported to Jordan as a response for the country’s support for the international coalition. In addition, William Henderson, a US oil expert, was killed in August on his work site in Egypt’s western desert,” the source said.

The source also said Egyptian members of IS have returned to Egypt and are receiving orders directly from the wali (leader) of Wilayat Sinai (the name for the Sinai Peninsula as given by Ansar Bayt al-Maqdis after joining IS). The first mission of these trained members would be to train new groups gathered by Ansar Bayt al-Maqdis in the center of Egypt, since the government has tightened its grip on movement between Sinai and other governorates. Their second mission would be to carry out operations in Cairo, targeting Egyptian security interests and Western targets, especially those affiliated with countries participating in the war against IS. He also said the operations would focus on bombings and remote targeting, or abductions.

The source explained how the terrorists are returning from abroad: “They pass through Turkey or Lebanon using fake or stolen passports. In the event that difficulties arise — such as the tightened border measures over the last few weeks and the investigations conducted by the Egyptian national security forces in airports — the terrorists travel to Sudan and other neighboring African countries and then secretly travel by land to Egypt.”

Concerns will remain present until Western embassies and the Egyptian government reach an agreement regarding measures to ensure security. These measures will most probably include reinforcing security around embassies and preventing public traffic in the area out of fear of attacks by cars rigged with improvised explosive devices.