The unexpected dismissals of three top executives from two of Turkey’s key pro-Erdogan newspapers has led to questions about the power games in the ruling AKP. 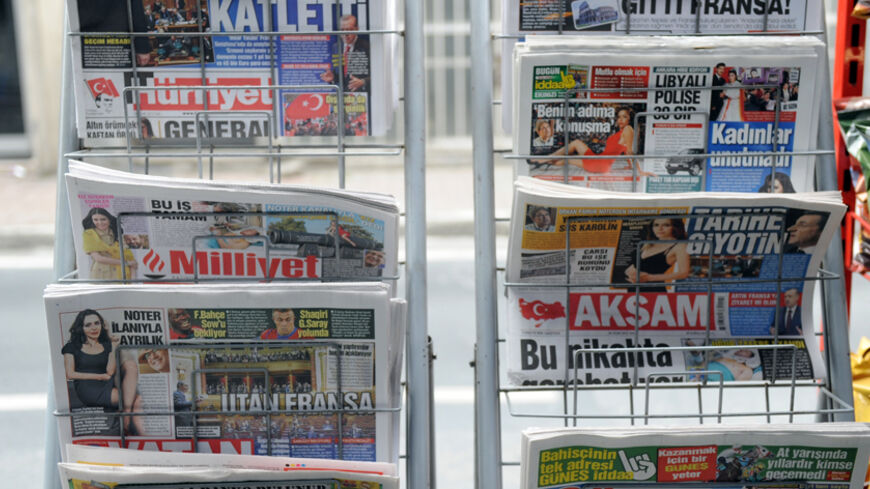 Newspapers are displayed at a newsstand, Jan. 24, 2012, in the Karakoy neighborhood of Istanbul. - BULENT KILIC/AFP/Getty Images

On Nov. 24, an unexpected purge took place in the pro-government segment of Turkish media. Three top executives of two prominent pro-government national dailies, Star and Aksam, suddenly lost their jobs. They were fired by Ethem Sancak, a prominent businessman who owns both papers. But many believe Sancak would not have made such a major decision without the approval of the ultimate boss, President Recep Tayyip Erdogan. That is why, since then Turkish journalists have been discussing, and gossiping about, the political significance of this in-house purge.

The three journalists in question are Mustafa Karaalioglu (media group manager) and Yusuf Ziya Comert (editor-in-chief) of Star, and Mehmet Ocaktan, the editor-in-chief of Aksam. All three are veterans of Turkey’s Islamist/conservative political movement and have a longtime alliance with Erdogan and his Justice and Development Party (AKP). (Ocaktan even served as an AKP deputy in the Turkish parliament in 2007-11.) They have been frequent guests in Erdogan’s presidential jet, to which only supportive journalists are invited. That is why their dismissal came as interesting news in a country where the dismissal of non-pro-Erdogan journalists has been too common to create any surprise.

On Nov. 28, Karaalioglu appeared on a talk show on CNNTurk and said the dismissals were nothing but a personal decision by the boss, Ethem Sancak, who bought both papers about a year ago. Although he said he was “heartbroken,” Karaalioglu said, “Bosses have the right to employ or dismiss us; we have to respect that.” In return, Sancak also spoke respectfully, saying, “It is just that our styles have not matched.” By looking at these statements, one can conclude that there is not anything unusual, as the changing of directors is only normal in the media as elsewhere.

Yet, many observers in Turkey believe that there is more to this than what meets the eye. First, one thing that needs to be noted is the dismissal of a Star columnist, Cemil Ertem, by Karaalioglu just a day before Karaalioglu’s own dismissal. Ertem is an economy writer, and has made a name for himself as a staunch enemy of “neoliberalism” and the “interest rate lobby” that supposedly plots against Turkey. He is known to share a similar vision, and friendship, with Yigit Bulut, who is also a Star columnist, and, more important, a top adviser to Erdogan since 2013. Bulut is quite unsympathetic to Ali Babacan, the minister of the economy since the AKP came to power in 2002, and word has it that he wants to replace the “neoliberal” Babacan to impose his more “independent” — and conspiracy-obsessed — economic vision.

Cemil Ertem was fired from Star on Nov. 23, for “black propaganda on social media against Mustafa Karaalioglu, in cooperation with Yigit Bulut.” When Karaalioglu was removed from his post just the next day, some suspected that Bulut was taking his revenge behind the scenes. This view, and along with the suspicion that Erdogan upheld Bulut over Karaalioglu (a fresh apparatchik over a veteran), created shock waves in the pro-Erdogan media. Three other Star columnists — Hakan Albayrak, Elif Cakir and Ibrahim Kiras — also resigned in support of Karaalioglu.

Another prominent name in the pro-Erdogan camp, HaberTurk columnist Nihal Bengisu Karaca, wrote a piece that reflected a deep sense of disillusionment. Those who have served Turkey’s “silent revolution” bravely are now being sidelined loutishly, she argued. “Once the brotherhood of yesterday is torn apart,” she wrote, “what remains is a tarnished hierarchy.”

Such comments reflect a wider feeling among some of the intellectuals or politicians in the pro-Erdogan camp: They have supported Erdogan’s “New Turkey” for years, but they are beginning to see its problems. Meanwhile, a new wave of more enthusiastic and devoted Erdoganists has come to the fore, dominating the scene and even blaming the veterans for their lack of commitment. The “silent revolution” that they have supported, in other words, begins to silently devour its children.

One journalist who interprets the scene in this light is Levent Gultekin, who worked with Karaalioglu and other veterans in Islamist/conservative media for years before breaking away a few years ago. In a Nov. 26 piece titled, “What exactly happened in Star newspaper?” he argued that a higher level of obedience to Erdogan was being hatched, and those who failed to match the new standards were being sidelined. In his words: “Those who respond to Erdogan’s demands by saying ‘Yes, let’s do, but let’s be careful about this and that,’ those who seek to have some balance in meeting those demands, those who hesitate and prove unwilling are being purged. … Instead of them, those who are openly in favor of confrontation and fighting, those who will blindly obey orders, are being given prominence.

“Those who say, ‘We can overlook some facts to stay in power, but at least let’s give an impression of democracy,’ are being sent away one by one. … Those who are moderate, reconciliatory, those who have reservations, those who say, ‘Let’s just be more careful,’ are sidelined. In this New Turkey, there is no place for moderates, who utter any ‘but,’ even if they are pro-AKP.”

Gultekin’s lines are certainly sobering, and many, including one of the Star veterans who just lost his job, Ibrahim Kiras, seem to agree. Others, however, insist that too much has been read into a mundane replacement of executives in an ever-volatile sector. It is hard to tell which view is more accurate. But it is accurate to say that the purge within Turkey’s pro-Erdogan media raised eyebrows even among some of those who have firmly supported Erdogan. They question whether their much-hailed “New Turkey” is in fact a bit overrated.