Turkey took a dangerous turn toward autocracy with the arrest of journalists critical of the government. 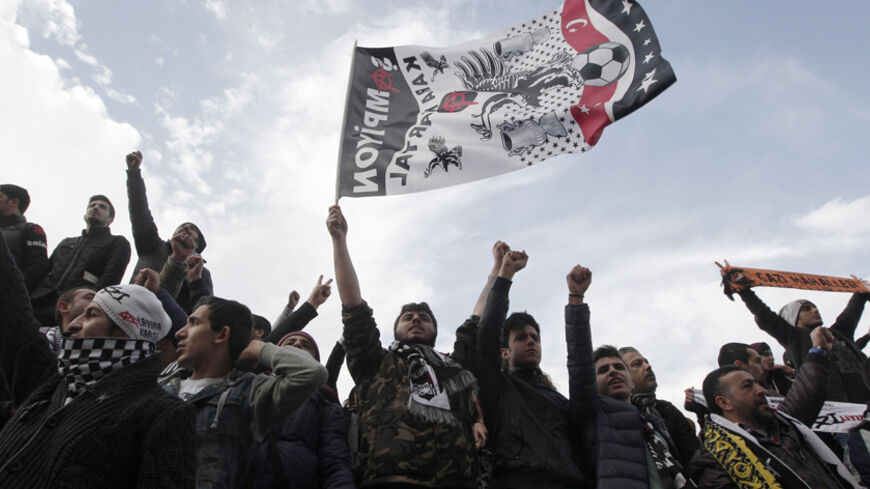 Protesters, who are supporting soccer fans on trial, shout slogans outside a court in Istanbul, Dec. 16, 2014. The fans are accused of involvement in a "coup attempt" for their participation in the Gezi Park protests. - REUTERS/Osman Orsal

Early on the morning of Dec. 14, while waiting at an Istanbul airport for my flight to Amsterdam, my phone rang. It was Hasan Cemal, a colleague and a prominent veteran of Turkish journalism. He said he was on his way from Yerevan, the capital of Armenia, where he had delivered a speech on the occasion of the Armenian edition of his book, “1915: Armenian Genocide.” He was on his way to Tbilisi, the Georgian capital, to catch a flight to Istanbul.

He asked if I had heard “the big news.” I was still in Istanbul, and I did learn the news of a police operation directed against 31 people, among them Ekrem Dumanli, editor-in-chief of the country’s largest-selling daily, Zaman, and the head of Samanyolu TV. Both are affiliated with Fethullah Gulen, the religious personality in self-imposed exile in Pennsylvania for more than 15 years now, who has been turned by his former ally, President Recep Tayyip Erdogan, into “public enemy No. 1.”

Dumanli’s name and those of his targeted colleagues had begun circulating in social media Dec. 11, prompting strong reactions. Thousands of people had assembled in front of Zaman's office to protest the expected arrests. Nothing happened. Many believed that the government, worried about public outrage, had been forced to take a step back. In the end, the operation was only delayed by 48 hours.

I teased Cemal about the information he had passed along. “If that is the case, stay in Tbilisi. Don’t come to Istanbul. And since it was while in Amsterdam that I ended my political exile in 1974, that means it will begin there again, after 40 years. I will stay there!”

Ironically, the reason I was flying to Amsterdam was to participate in the 40th anniversary of the Union of Workers from Turkey in the Netherlands (HTIB), of which I was the founder. Meanwhile, Tbilisi had special meaning for Cemal as the place where his notorious grandfather Cemal Pasa (Jamal Pasha), one of the triumvirate of nationalist Ottoman Turkish leaders who led the empire into World War I, was assassinated, allegedly by Armenian gunmen.

At times when political freedoms, the right to dissent and freedom of conscience are curtailed, it is common to resort to irony, sarcasm and black humor, and that is what we were doing over the phone. After reaching Amsterdam, it did not take me long to learn that Cemal, having arrived in Istanbul from Tbilisi, had immediately gone to the Zaman building, and that that too had become a story on TV and online news sites.

I also learned that because of a bureaucratic error, the police operation would have to be carried out in the afternoon, which meant in front of thousands of people who had assembled in anticipation of the action. They cheered Dumanli on as he was being taken into custody.

A day later, Ekrem's lawyers issued a statement. Ekrem, a longtime colleague and friend who studied journalism at Harvard University, was as defiant as ever. He said that what was occurring was tyranny and oppression, and he was determined to resist until the end.

I was a bit wary and uneasy about the way the Western media would portray this dramatic development in Turkey. The cliché of it being just another Erdogan campaign against that US-based Muslim cleric he has accused of trying to overthrow his government could well be the gist of the simplistic reporting style to which we have grown accustomed.

The Gulenists have always been a controversial issue, particularly among the secularist and old Kemalists circles, because of their alleged role in the judiciary and security establishment. The partisan, government-controlled press in Turkey would naturally salute the latest development as another show of determination by Erdogan. That is, more or less, what happened.

There were some notable exceptions, like Abdulkadir Selvi, Ankara bureau chief of the pro-government daily Yeni Safak and a columnist who built a reputation as being the most ardent and most-plugged-in Erdogan supporter. Selvi wrote — perhaps in his first-ever criticism of an Erdogan government — that taking Dumanli and other journalists into police custody was a gargantuan mistake that would provide fuel to critics outside of Turkey.

Indeed, the European Parliament and its president and vice president took the lead. Martin Schulz, parliament president, using the hashtag #FreePresscannotbesilenced, tweeted that Turkey and freedom of the press were diverging. Vice President Alexander Graff-Lambsdorff went further. A German liberal and rapporteur of the liberal group in the parliament on Turkey, Lambsdorff said the government had opted for oppression, and with the detentions had shown how the Justice and Development Party government had given up on membership in the European Union.

Earlier Federica Mogherini, EU high representative for foreign affairs and security policy and commission vice president, and Johannes Hahn, commissioner for European neighborhood policy and enlargement negotiations, issued a statement saying that what had transpired was incompatible with freedom of the press. They noted that Turkey’s case would be taken up by the EU's Foreign Ministerial Conference Dec. 16.

Another notable reaction came from Washington, unusually on a Sunday. The State Department expressed its concerns as follows: “It appears that media outlets that have been openly critical of the current Turkish government are among the targets of these actions by Turkish law enforcement. Media freedom, due process, and judicial independence are key elements in every healthy democracy and are enshrined in the Turkish constitution. As Turkey’s friend and ally, we urge the Turkish authorities to ensure their actions do not violate these core values and Turkey's own democratic foundations.” German government spokesman Steffen Seibert followed suit Dec. 15.

Erdogan, clearly irritated by the flow of Western reactions harshly retorted Dec. 15, issuing an unprecedented demand for the EU “to mind its business.” He said the operation was a purely domestic, security matter. Erdogan’s detour toward authoritarianism is not new. Neither is the pressure on dissent or his constant violations of freedoms of the press and expression. Yet, there had never been such a broad and prompt reaction from the democratic world.

The outrage in Turkey is also important to note. Turks are becoming increasingly fed up with calls to subscribe to the government's discourse on the “struggle against the parallel structure,” that is, the Gulenists in the state apparatus. Many who tended to see the events of the past year, after the suppression of the corruption allegations, as a power struggle between two Islamist factions are now beginning to contemplate that the regime is showing its true, authoritarian colors under the guise of fighting the Gulenists.

Erdogan’s police operation should be a wake-up call for anyone concerned about the democratic future of the country, irrespective of what Gulen and his supporters represent.

That is why the liberal daily Taraf on Dec. 15 carried the defiant headline “Hitler started the same way too,” implying that irrespective of the affiliation and ideology of whoever Erdogan is targeting, it is time to display some democratic solidarity against a government that is gradually but surely changing the nature of the regime.

The Western, democratic sensitivities voiced by the United States and the European Union coupled with growing anger in Turkey against the government are a formidable asset, but it is far from certain that they are powerful enough to check the authoritarian drive of an unruly Erdogan.

A very dangerous turn toward autocracy has been made in Turkey. It only could have happened after legislation was passed allowing prosecutions based on a “reasonable doubt” instead of “concrete evidence.” There are too many “reasonably suspected” people in Turkey. What happened to Zaman’s editor-in-chief is just the start.