If Turkey is so isolated, why all the high-level visits to Ankara in the last month? 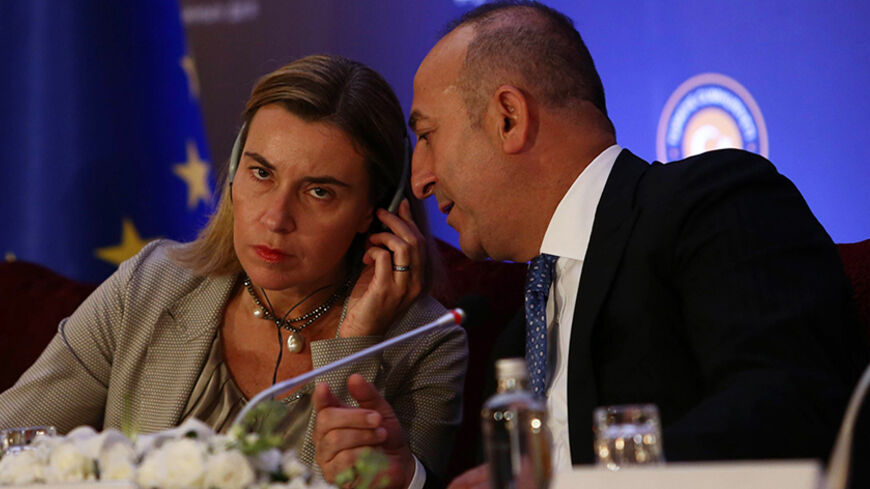 Pro-government circles in Turkey have been boasting about successive visits by Western dignitaries to President Recep Tayyip Erdogan. US Vice President Joe Biden’s visit in the second half of November has been followed so far in December by visits of Pope Francis, Russian President Vladimir Putin, High Representative of the European Union for Foreign Affairs and Security Policy Federica Mogherini and British Prime Minister David Cameron. Pro-government figures sarcastically respond to claims that Turkey’s ties with the Western world are jeopardized and Turkey is heading for isolation under its Islamist leadership by pointing out the names of the international officials rushing to Erdogan’s new controversial but glamorous palace in Ankara and saying, “What kind of isolation is this?”

Interestingly, except for Putin, all those who landed in Ankara flew in from the West. Mogherini and Cameron in particular aroused the hopes of regenerating Turkey-EU relations, which for a long time have been in a state of lethargy.

Since Turkey started the accession talks with the EU in 2005, only 14 chapters out of 35 — the number that corresponds to the number of policy areas Turkey has to fulfill to be a full member of the EU — have been opened for negotiations. The latest chapter, following a three-year lull, opened in November 2013.

Cyprus and France stood out among the countries that have blocked progress on Turkey’s accession talks. Since the crackdown in the summer of 2013 on nationwide dissent in Turkey, corruption scandals, restrictions on press freedoms and freedom of expression and social media bans, the relations between the EU and Turkey went further awry.

In addition, the Turkish leaders became more “Islamist” and more vocal in their anti-Western statements, losing hope of accession to the EU further. They subsequently showed interest in flirting with Russia on a number of issues.

What then has been the “game changer” that influenced European leaders and officials hitting the road to Ankara one after the other?

The magic word contains two letters: IS. The emergence of the Islamic State in proximity to Turkey over the swaths of territory of neighboring Syria and Iraq has become a major security concern for the Western world. The perceived reluctance of Turkey, or the differing approaches of Ankara to the “IS issue,” has prompted closer engagement with the Erdogan government to find ways and means to tackle the new challenge.

The IS threat was at the heart of Cameron's visit to Ankara on Dec. 9. At a news conference, he said: "[Britain] and Turkey would work 'hand in glove' to combat the threat from [IS]. … We should work hand in glove because the people who are traveling, whether from Britain or elsewhere, sometimes through Turkey, sometimes in other ways to Syria and Iraq. These are people that threaten us back at home so we should do everything we can …”

Cameron’s visit was preceded by that of Mogherini. On Dec. 8, the new top foreign affairs official of the EU was in Ankara for the first time — a visit that was hailed as the highest-level EU visit in several years — bringing hope of re-energizing the partnership with Turkey. The talks with Mogherini included the challenges that have emerged with the rise of IS in Syria and Iraq.

She visited Gaziantep on the Turkish-Syrian border to see the refugee situation firsthand and pledged $85 million of additional refugee assistance. Turkish officials had been resenting the Western negligence in assisting Turkey to relieve some of the financial burden of taking in the Syrian refugees, who now number more than 1.5 million.

For those who closely follow Turkey-EU relations, Mogherini's assumption of her new EU role in the summer raised expectations that she would be keen to improve bilateral relations. The first thing she did was bring the head of the EU delegation to Turkey, Stefano Manservisi, as her “special adviser” to Brussels. Some of us in Turkey knew very well how Manservisi would counsel her after packing up in Ankara and settling down in Brussels.

Former EU Ambassador to Turkey Marc Pierini and former Turkish diplomat Sinan Ulgen, who is known for his expertise on Turkey-EU relations, co-authored a report titled, “A Moment of Opportunity in the EU-Turkey Relationship." The cover page of the report features a picture of Erdogan receiving Mogherini in his office. The report emphasizes, on page 19:

“The international coalition aligned against the Islamic State, which includes Turkey and the EU, is facing questions of whether to act to protect populations facing onslaughts. As illustrated by the Islamic State’s attack on the Syrian Kurdish district of Kobane, the international community will be faced with the issue of the responsibility to protect if and when attacks target the Syrian Kurdish districts of Afreen and Jazzera, or if the Islamic State tries to take the control of the city of Aleppo. Answering these attacks will necessitate deeper consultations among the EU, the United States, and Turkey, as well as joint actions.”

That is exactly what is done with Mogherini, too. However, it is where the divergence on the positions of the Turkish leaders and the EU is revealed. Mogherini after meeting Erdogan said, “We [the EU and Turkey] should cooperate much more in cases like Aleppo. We should have cooperation in freezing the fighting,” a clear indication that the EU is behind the efforts of Staffan de Mistura, the UN special envoy who tabled the initiative of “freeze in the fighting” in Aleppo. While Mogherini was on her way to Gaziantep, de Mistura had been there for four days to convince the Turkey-based Syrian opposition to be forthcoming with his initiative.

The “freeze the fighting in Aleppo initiative” is considered a prelude to resume the process to find a political solution for the Syrian crisis. The Turkish leadership has not budged from its priority of removing the regime of Bashar al-Assad in Damascus.

At a news conference in Ankara, Mogherini said Turkey had signed up to less than a third of the EU’s recent foreign policy positions compared to some 80% in the past. She added, “We need to improve on the alignment on foreign policy and security policy. It’s never been so low and this is a problem for the European Union, but it is mainly a problem for Turkey.”

The sarcasm of the pro-government circles aside, following the successive visits of Western dignitaries to Ankara, the following question arises: “Does discussing the cooperation on Syria suggest a new breath into the EU-Turkey relationship or further pulmonary problems?”