The government is obstructing memorial observances for the 1978 anti-Alevi massacre in Maras, hoping it will be forgotten. 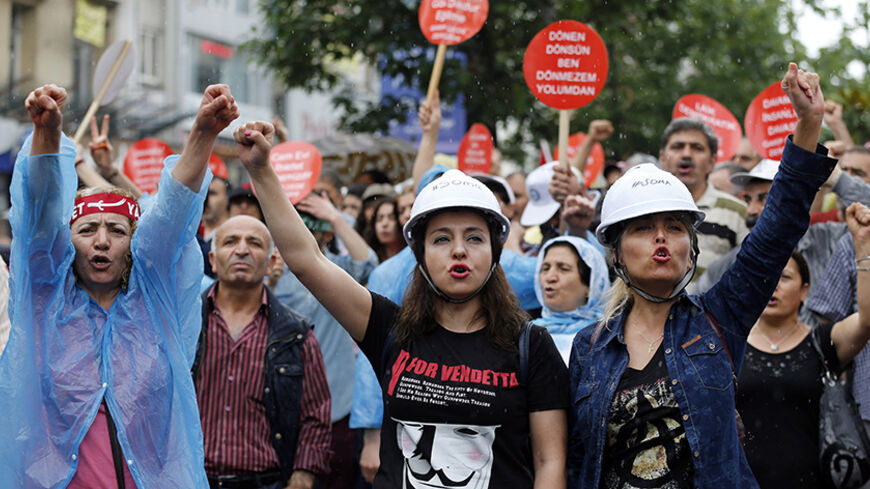 Alevi demonstrators shout anti-government slogans during a protest against violence in Okmeydani, a working-class district in the center of Istanbul, May 25, 2014. - REUTERS/Murad Sezer

Tragedies from Turkey's recent past are returning to the agenda like a recurring nightmare. One such disaster that cannot be swept away is the massacre at Maras, a southeast city from which almost 80% of its Alevi residents were forced to flee to major cities and abroad. The more the state tries to forget such incidents, the more interest they arouse.

This year a major observance was planned to commemorate the Maras killings, but the government brought in 2,200 police and gendarmes from neighboring cities to try to prevent people from accessing Maras. Those who came in buses were not allowed to enter the city. Those who managed to get in individually organized a small observance. The ruling Justice and Development Party (AKP), which profusely discusses the Dersim massacres, for which it blames the main opposition Republican People's Party (CHP), cannot tolerate even the mention of incidents like Maras, which implicate nationalists and conservatives.

In Maras during Dec. 19-26, 1978, explosives and gun fire — amid provocations of “Communists are burning mosques” and “Our religion is at stake” — resulted in the deaths of 111 people, according to official sources, or 150, according to civil society sources. Most of the victims were Alevis. More than 200 Alevi houses were set on fire, and at least a hundred businesses were destroyed.

In the aftermath, 804 people were tried in court. Some were punished, but the real culprits and planners were never unmasked. What happened in Maras was one of the factors behind the Sept. 12, 1980, military coup. Many believe the deep state blamed the killings on nationalists and religious people to justify the September coup.

Where are the graves?

So why is the memory of Maras still a bleeding wound? According to Selin Yalincakoglu, a representative of the Yalincaksultan Alevi Cultural Association, “It has been 36 years, and we still don’t know where the victims are buried. People at least want to know where their relatives and friends are buried. They don’t have a grave to recite their lament.”

Popular narrative says that while the Alevis were fleeing to save their lives, the bodies left behind were buried in a mass grave. Yalincakoglu said, “The state knows where they are buried. But it keeps silent and closes the doors on us when we ask. Moreover, the state continues to commit crimes by erasing the traces of the massacre.” Angry at the state, she added, “​The municipality is scratching the houses set on fire and thus covering up the traces of the massacre. There was only one such house left, but now they knocked that down also.”

Adding salt to the wound is the state’s refusal to allow any remembrance of the victims. For Yalincakoglu, the state’s warnings against the alleged threat of provocation is merely an excuse. “If there is provocation, then the state should take action against the provocateurs, not us. They haven’t allowed us into Maras for the past five years. They tell us to go to Narli to hold the observation although the massacre didn’t happen there. Anyhow, if we go as a group, they won’t let us go to Narli either. This year they brought in 15 times more police than participants. They had identity checks at five checkpoints. All we want is to be told where the graves are and to be allowed to remember. But the state is doing all it can to make us forget.”

The question most asked today is why the state is comfortable discussing the 1937-38 Dersim massacre but bans everything to do with the Maras killings. Yalincakoglu believes the AKP is reacting reflexively as the state. She said, “These massacres couldn’t have been carried out without the blessing of the state. The AKP doesn’t want the state to emerge as the perpetrator after serious investigations. It is easy to commemorate Dersim, because there are no witnesses left. Witnesses to Maras are alive. The state doesn’t want people to understand that it committed massacres to prepare ground for a coup.”

Sebahat Tuncel, a member of parliament from the pro-Kurdish People's Democracy Party (HDP), said a commission of inquiry has been proposed in parliament, but the government objects to it. Tuncel told Al-Monitor, “The local administration was inclined to allow the observance this year, but it was banned by firm instructions of the AKP. They harp on Dersim just to use it as political leverage against the CHP. Our request was to face up to all the massacres. The state is still not ready for equal citizenship for Alevis.”

The historian Ayse Hur told Al-Monitor that the state is evading investigations because the victims have only a feeble voice and because it was a plot by the deep state: “The massacre was quickly buried in social memories. In 1977, 231 people were killed in political violence and 2,800 in 1980. On average, 20 people were being killed daily. Therefore Maras was not unique. We had a long stretch of amnesia after the Sept. 12 coup. Asking to deal with the past is something new in this country. It came with the strong pressure against the state by Kurdish victims' groups domestically and Armenians in the international arena. In Maras, it was the leftists and subdued Alevis who were the victims. Don’t expect the perpetrators to remember it. Nobody remembers the 1934 Thrace incidents against Jews, the 1942 Wealth Tax. The deep state lobby is still functioning. We still don’t know the background of the Sept. 6-7, 1955 pillages [against Greeks]. The AKP, out of its instinct for self-preservation, feels the need to use legal and illegal instruments of the state.”

Hur also noted, however, that if there is strong public demand, or if the AKP feels the need for a revised agenda, it could bring Maras down from the shelf in a way unrevealing of the deep state.

The journalist Ali Topuz made the following assessment about the Maras situation: “Maras was a pogrom. Paramilitary bodies used by the deep state and their armed units, that is, the ultranationalist militants, were involved. For the state to face up to this reality means facing up to its own crimes. Those involved in such affairs won’t volunteer to settle accounts unless pressed hard politically. The state’s homogenous, Turkish Sunni society project was the real cause of frequent similar incidents. The Sept. 6-7 looting, 1974 Cyprus operation, cleansing Greeks from Bozcada and Gokceada were all done the same way. Soldiers who couldn’t stop the Maras massacre showed that they had the power to cope with all other armed groups. The AKP’s determination to avoid settling the accounts arises from its close affiliation with religious ideology. The AKP’s narrative doesn’t change: ‘Traitor provocateurs plotted these incidents to blame the innocent people and to blame Sunni Islam.’ Such a mind-set will not agree that the state is responsible. Otherwise it wouldn’t ignore legality to prevent the Maras observance and wouldn’t invite the number one suspect of the Maras massacre, Okkes Kenger, to an Alevi workshop.”

There is a long list of incidents the state refuses to discuss. As long as that list remains in the dark, a robust and peace-loving society will remain a distant dream.