With the war still raging, it's hard for the morality police to focus on the LGBT community in Damascus. 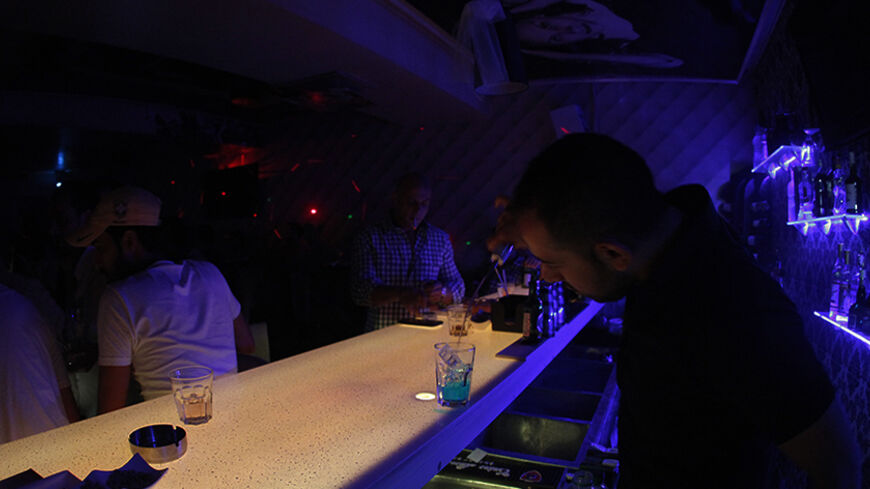 DAMASCUS, Syria — The neighborhood of Shaalan in the center of Damascus was considered the most attractive place for the lesbian, gay, bisexual and transgender (LGBT) community. Many used to gather in front of the famous al-Madfai park or sit on the steps of Byblos Bank, which had become a popular meeting place. However, the scene has changed since the war began.

Many gays have left Syria, while those who decided to stay frequent other public places close to their homes. Any person wandering around an area far from their place of residence arouses the suspicions of the security forces deployed in the streets, especially in the Green Zone, which includes al-Rawda, Abu Rummaneh, Shaalan and al-Maliki. The regime is trying to keep the area safe as the Ministry of Defense and the residence of President Bashar al-Assad are also located there.

The Shaalan neighborhood is thus no longer the favorite place for gays who live outside the security square. At most, they come early and leave early and prefer to spend their time in restaurants or cafes rather than in the streets.

Two years ago, on the benches of al-Madfai park in Shaalan, Ayman and his partner Muaz met as he took his lunch break close to the clothes shop in which he works. “The days when we used to go to the park are gone. People have become more aware of the gay community over the last three years, especially after the media placed it in the spotlight in a negative way. I work in a shop that is close to the park and I'm afraid that they know about me and will fire me for this reason,” Ayman told Al-Monitor. “In the park, which is close to the Ministry of Defense headquarters, two years ago a mortar shell fell that killed two people. This is why I prefer to sit in a cafe, it’s safer,” he said.

Today, those living inside the Green Zone are completely isolated from the ferocity of the war taking place in Syria. Yet, they are in direct contact with its psychological, social and economic impact. At the security level, central Damascus is no longer a priority in terms of security and military presence, since protection is already provided at its various entrances and exits. This has reduced the moral police checks on the LGBT community and given them greater freedom to appear in public without fear.

Muaz, who lives inside the Green Zone while his friend Ayman lives in al-Midan, south of Damascus, said, “Since the beginning of the war in Syria we have never been subject to any security harassment. I feel that I'm no longer targeted by the moral police because it no longer exists. As long as we do not discuss political issues, we do not carry arms or postpone our military service, we are safe. But I'm afraid of the increase in Islamists.”

Ayman and Muaz have a secret relationship that only their close friends know of. However, their families are unaware of their relationship. When they thought of moving in together in central Damascus, where Muaz prefers to live, they were deterred by the high rental prices, which have tripled since the outbreak of the civil war. They also could not get security approval to rent a place — this has become impossible for any young person in the Green Zone.

Homosexuality in Syria is considered a crime under Article 520 of the Syrian penal code. Gays are not allowed to open bars or private nightclubs, and therefore the nightclubs they go to are limited to those that accept the LGBT community, usually either because the owner is open-minded and welcomes LGBT clientele after they have become regular clients or because the owner is gay.

Heterosexuals who venture to the bar do not feel threatened or disturbed, Mazen said. “When new straight clients come in they adapt to the situation, which makes them more receptive to the presence of gays in public. The war has brought people closer to each other and unmasked the other side of the gay community, which has always been shunned in the media. You perceive a doctor, lawyer, engineer and teacher in a different way from the stereotypical image that most of the people have of [gays], namely that they are feminine and attract their partners at traffic lights.”

Wael and his friend Louay sit at a table in the bar and are among the establishment’s loyal customers. “Our options [of places to go to] have decreased. Previously, we used to throw private parties for gays in eastern Ghouta, in Rif Dimashq or on the airport road. But it is impossible now in light of the ongoing war there. Therefore, leisure activities are limited to either partying here on the weekends or going to a friend's house, where we can meet once a week,” Louay told Al-Monitor.

According to Louay, relationships have changed, even within the gay community, due to the war. “As many people left Syria because of the fighting, the number of LGBT people in Damascus has decreased and most know each other and frequently go to the same places in the Sarouja area and Bab Touma, where numerous cafes stay open late,” he said. “We have become more mature with the war and most of us have a stance on what is happening in Syria. Some of my friends support the regime and others the opposition. Some of them were arrested during a peaceful demonstration in Shaalan in June 2011.”

Away from the nightlife, and like the rest of the Syrian people during the crisis, the gay community has been active in volunteer work and civil society organizations. Abdul Rahman, who is a volunteer in a youth group, said, “Despite all of the war’s negative aspects, it has allowed us to prove to people that we are active in the community. I'm no longer afraid that my sexuality is discovered because I have spoken about it publicly. I have shown myself as an active member of the community; I know my rights and fulfill my obligations. The evaluation of people is based on my work and the extent of my productivity and is not based on my sexual identity.”

Unlike Abdul Rahman, Diaa believes that the war in Syria has negatively affected all areas of his life. He lives on the outskirts of Damascus and it is impossible for him to get home after 8 p.m. because of the checkpoints and the absence of public transportation after this hour. Diaa told Al-Monitor, “What I fear most now is not being able to postpone my military service to complete my education.”

He added, “The economic crisis, high prices and insecurity have become an obstacle for me to have a serious relationship. My last relationship with someone ended after he decided to leave for Europe. I'm also thinking of emigrating because I'm tired of leading a double life, I want to live in a safe country where I'm respected.”

Reine shares Diaa’s point of view. She believes that the community’s acceptance of gays has not changed much, especially of lesbians. “I'm subject to criticism at the security checkpoints in the street because my appearance is different from that of other girls,” she told Al-Monitor. “I was arrested more than once at a security checkpoint while I was driving my car with my friend, with and without a reason. Every time I hear homophobic words, that causes me to explode,” she added.

Reine added, “One good thing that has happened during the war is the rapprochement between lesbians and gays; we have become friends and formed a group. We go together to cafes, restaurants and bars, which has provided us with a social cover that prevents people’s criticism. I was more isolated in the past and I refused to meet gay men, but now I feel that I'm more daring when they are beside me. Yet, I keep thinking of traveling abroad."

A lot has changed in Damascus since the war started wreaking havoc. Some believe that the war provided homosexuals with an opportunity to publicly show their sexuality, as people are preoccupied with the war, while others argue that society still needs many years to accept them. In light of all these changes, Syrian law criminalizing homosexual activity remains unchanged.