LGBT Turks Seek to Capitalize On Gezi Good Will

While record numbers participated in Turkey's annual LGBT pride parade, some still doubt whether this atmosphere will help them in their fight for acceptance. 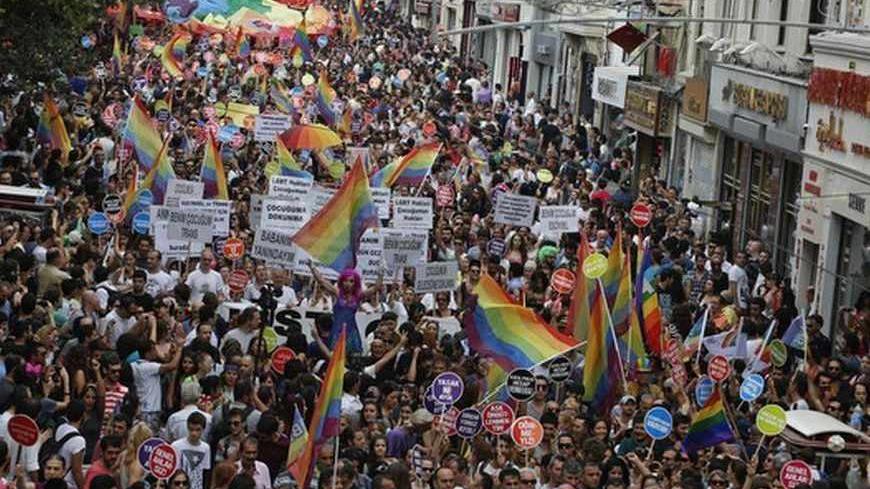 While the jury is still out on whether the government of Prime Minister Recep Tayyip Erdogan has really understood the message from the Gezi Park protesters, people continue to speak up for their individual rights. On Sunday [June 30], for example,  lesbian, gay, bisexual and transgender (LGBT) groups had a record number of participants at about 20,000 at their 10th annual parade at Taksim Square in Istanbul, demanding better treatment and equal rights.

“It’s difficult to be a member of the LGBT community anywhere around the world, but it’s even more difficult in Muslim countries and in places where democratic culture has not really been established,” Deniz Yurdakul, an activist on LGBT rights for many years, told Al-Monitor. Yurdakul attended the Sunday parade with heavy eye makeup resembling a rainbow flag, symbol of the pride march as a sign of diversity, inclusiveness and hope. She said she just wanted to transform herself for a day into looking like a tranvestite, as they’re the most isolated of all in this community.

The LGBT community supported the Gezi Park protesters from day one. Their presence in such an environment hand in hand with the rest has naturally created an atmosphere of empathy.

“This is the first time that people came out on the streets in such massive numbers and for a significant duration. And these protests have provided an opportunity to the minorities, the extremes, a chance to express themselves about their challenges in this system,” psychologist Dr. Selin Kor told Al-Monitor. “They demand the same rights granted to the heterosexuals. This Y generation has a different approach to the LGBT community, but it’s a very slowly progressing issue in general.”

Yurdakul concurs. “What bothers me the most is that they can’t even ride on public transportation,” she told Al-Monitor. “They face challenges in their basic human needs — like housing, health care. As if it’s not enough that they face more than enough troubles since childhood about their sexual tendencies, they end up fighting against legal and administrative discrimination. They can’t find a decent job to make their living. The transgender ones mostly end up being forced to sex trafficking, and it’s really a shame of this society not to give them any other opportunity to live their life.”

“People don’t even consider that we have a right to happiness,” said Caglar, a gay man who attended the LGBT parade and asked not to share his real name out of fear of being recognized by family. “I am not a rich person. But I know when I go to state hospitals when in need, they push my appointments to the back of the list, which means that I can get the earliest appointment in three, four or five months sometimes. This has to change. I am a human being, and want to be treated as such.”

“What hurts me the most are the looks. People look down on me, belittle me as if I carry a tuberculosis virus,” said Caglar. “I have to pay attention to my behavior at all times. Even a small mistake, or acting off guard, could cost my life. Many have been beaten because of it.” In fact, the chilling effect of the murder of Ahmet Yildiz in July 2008, presumed to be Turkey’s first gay honor killing, keeps echoing in all these conversations.

“Most of the LGBT community members have been disowned by their families. They grow up without a sense of love,” said Yurdakul. “There are cases when transvestite funerals cannot include a burial. But I have never seen so much support for these people as happened during the Gezi Park protests. When people tasted firsthand the experience of what it is like to be pushed to become the “other,” they better understood the challenges of these suppressed people, and the heterosexual community has earned a sincere empathy for them. I am more hopeful for the LGBT community than I have ever been prior to May 31.”

Yurdakul has decided to make an individual statement in the next days. “The ones who are the most isolated in the community are the transsexuals and transvesties. They are not accepted in restaurants — including McDonald’s,” she told Al-Monitor. “I like to drive attention to this issue. Therefore, I will dress up like a transvestite, and go to those restaurants where transsexuals and transvestites are not welcomed. Their situation is a shame on humanity. People who respect human rights should do all they can to help them live a life as human beings.”

While there is nothing that legally prevents a person from the LGBT community to ride public transportation, benefit from health care or rent a place to live, Yurdakul also hopes that the parliament will make all the necessary changes into law to help improve their living standards. “Although I don’t expect that these changes will take place with this government in place, I hope the parliament takes this as a human rights issue. I hope people’s support that was generated during the Gezi Park protests will stay in support of these people.”

Kor shares the same hesitation. “The American Psychiatric Association also made it clear that this is not a sickness, but a tendency that comes from childhood. While severe trauma may push one to different sexual preferences, the majority show the signs of these different sexual tendencies from very young ages on,” she said. “It’s difficult to assess how these exchanges at the Gezi Park protests and the support of the LGBT parade will really impact Turkish society, but one can at least hope that the families who have a lesbian, gay or transgender child will be able to better understand them, and accept and love them as parents do. After all, an ember burns where it falls.”

While many feel confused about their place in society, like Caglar, and feel the need to be accepted by their families, they all want to be treated legally as equal citizens — and for a democracy, a true democracy, respect for individual rights is what matters most.

“I hope to benefit from all the social rights that the state gives to its citizens as human beings,” said Caglar.