It’s become even harder for Syrians to flee the war-ravaged country after Syrian authorities stopped the ferry service between Tartus and the Turkish port city of Mersin. 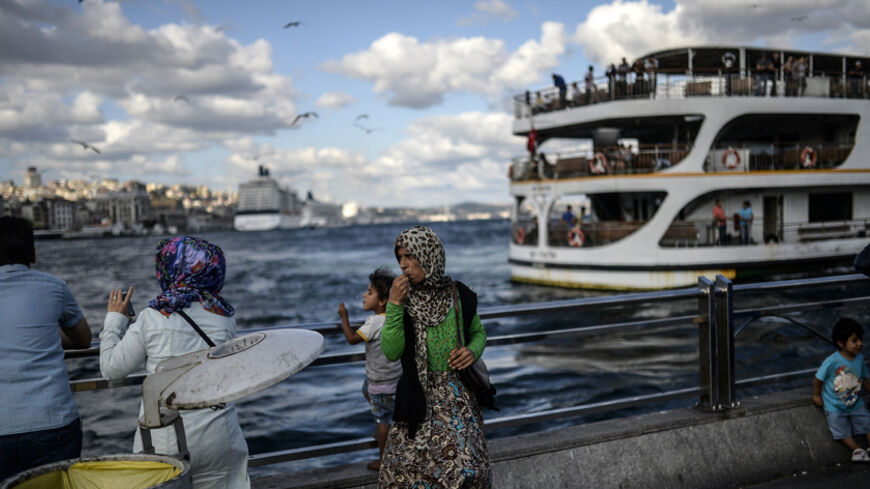 A Syrian woman stands with her daughter near the Bosporus, Aug. 30, 2014, in Istanbul. - BULENT KILIC/AFP/Getty Images

A correspondent in Damascus
December 19, 2014

TARTUS, Syria — On Dec. 8, the Syrian authorities issued a decision to halt the ferries transporting passengers from the Syrian port of Tartus to the Turkish port of Mersin. Why these trips, which started late last summer, began operating is unclear, given the high tension between Damascus and Ankara.

Before these ferries began service, Syrians used to travel to Turkey via Beirut or through land crossings controlled by Syrian opposition factions. All crossings on the Syrian-Turkish border controlled by the Syrian regime have been closed, and Syrian-Turkish flights were suspended while relations between the two governments deteriorated. Before the outbreak of the Syrian revolution, using the land crossings was easy and inexpensive. It was possible to drive from Tartus to Mersin, and the trip would take less than five hours through the Kassab crossing, which has been closed for over two years now.

Throughout the past five months, hundreds of people have been gathering almost daily at the gate of the Tartus port. Luggage piled up on the sidewalk of the street leading to the main port gate, where security agents searched bags and checked travelers’ documents. Many appeared to be poor families fleeing the harsh conditions of the Syrian war. Old men with their children and veiled wives were often seen at the port’s gate with worn-out luggage.

Prior to the regime’s decision to halt the ferries, Al-Monitor had met with Umm Hassan, who was getting ready to travel with her children aboard one of them. She explained the conditions that led her to the decision: “I was moved with my husband and children from Aleppo to the Syrian coast about a year and a half ago. My husband disappeared a year ago on his way back to Aleppo to check on our house there. I have been trying for a few months to travel to Turkey to stay with my relatives. These ferries are a gift from heaven, as I managed to raise enough money by borrowing from friends and working for two months as a housemaid.”

Why didn’t Umm Hassan travel through the opposition-controlled crossings in northern Syria, or through Lebanon? She said, “I did not dare to travel with my children across Idlib and Aleppo because of the battles. Moreover, I was afraid that if I crossed to Turkey through Bab al-Salam or Bab al-Hawa, the border officials would have put the Free Syrian Army stamp on my passport, which would prevent me from returning to the areas under the control of the Syrian government, should my husband turn out to still be alive. I was also unable to travel to Lebanon due to the ill-treatment by the Lebanese General Security members on the border, and I couldn’t head to Turkey through Lebanon, either, since I cannot afford the cost of air travel.”

While Umm Hassan, who traveled two days before the ferries were halted, was lucky, hundreds of other Syrians were not. If the ferries are permanently out of commission, this closure ends the last means of exit for a lot of people unable to enter Lebanon and to cross the areas controlled by armed opposition forces toward the Turkish land border.

After these trips were halted, a worker in the Tartus port told Al-Monitor on condition of anonymity, “I used to watch the passengers closely and chat with them whenever I could. Many travelers came from provinces witnessing fierce battles, such as Rif Dimashq, Homs and Hama. Also, dozens of military-aged men would come from across Syria to travel aboard these ferries as the date of their conscription approached.”

Asked how the Syrian security services treated travelers, the worker said, “They treated everyone well, including the families coming from areas outside the state's authority, such as Raqqa and Deir ez-Zor. As for those wanted by the Syrian authorities, they were immediately arrested. Young men were often arrested at the gate as they were called for mandatory military service.”

Once the decision to halt these trips was made, it was immediately implemented. A ferry that was supposed to take off from the Tartus port on the day following the decision was canceled. Also, dozens of people who did not know about the decision were stopped at the main port gate. Although the Syrian Transportation Ministry said this was a temporary measure while the passenger terminal is readied and the marine lines equipped with better quality ferries, the sudden decision and rapid implementation has convinced many that it was driven by other motives. Perhaps the desire to close the port was an attempt to stop those using it to flee the war.

A worker in the field of maritime transportation told Al-Monitor on condition of anonymity, “The reasons that led to the suspension decision do not look convincing. The renovation of the passenger terminals in the Syrian ports is an easy process, if there is indeed a decision to do so. As for the need for ferries to be classified as 'excellent,' this is somewhat impossible, as the owners of 'excellent' ferries cannot waste their time on a few short trips that bring low profits like the ones between Tartus and Mersin. I think that there are other security or political motives behind this decision, and they may be related to Syrian-Turkish relations.”

It is not yet clear whether this move is temporary. However, the decision has intensified the siege suffered by Syrians inside the country and closed one of the very few exits, which are narrowing by the day with the ongoing and escalating fighting across the country.