Syrians flock home from Turkey for Eid despite danger

Syrian refugees living in Turkey are returning home by the thousands for Eid al-Adha, and the border crossing facilities are working overtime to facilitate the process. 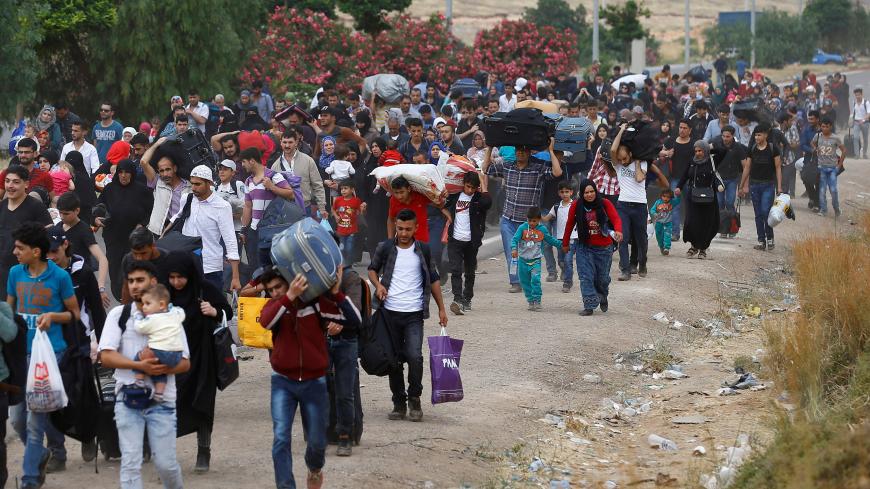 Syrians, who say they are returning to Syria ahead of Eid al-Fitr, carry their belongings as they walk to the Turkish Cilvegozu border gate located opposite of the Syrian crossing point of Bab al-Hawa, Turkey, June 14, 2017. - REUTERS/Umit Bektas

ALEPPO, Syria — Syrian refugees living in Turkey have been entering Idlib, in northern Syria, for the Eid al-Adha holiday. The administration of the Bab al-Hawa border crossing started to allow people in through on Aug. 6 and will continue to do so through Aug. 19.

Within the first two days, 5,000 people had crossed. On Aug. 9, their number reached 8,000. The crossing administration expects the number of people crossing into Syria to spend the holiday to reach 40,000.

The crossing administration announced that Syrians who wish to pass through must register and book their date on the crossing’s website, provided that they meet certain conditions.

In a live Facebook video on July 28, two days before registration opened, Capt. Qassem al-Qasem, the head of the immigration and passports department at the crossing, explained the process and the conditions for crossing into Syria for the holiday.

Mazen Alloush, the director of public relations and information at Bab al-Hawa crossing, told Al-Monitor that by Aug. 16, 30,000 had crossed.

Alloush noted, “The crossing administration has tried to provide all the needed facilities to Syrians wishing to enter Syria. We provided free buses and have tried to facilitate the process. … Everything has been organized from the moment they exit Turkish territory until they leave the Bab al-Hawa crossing station. Several buses wait for them at the crossing in addition to workers and carts to carry luggage. Water, free internet access and other services are offered in the crossing. There are 500 workers in the crossing working around the clock to facilitate the process and secure the area.”

“We clearly explained the conditions that must be met so that Syrian refugees coming from Turkey can enter the Bab al-Hawa crossing and spend the Eid holiday inside Syria without any problem,” Alloush said.

Alloush explained that visitors must have a Kimlik card, which is an ID card for refugees living in Turkey. “Syrians with Syrian passports and Syrians with Turkish citizenship … are all allowed to enter. Children are not allowed to cross into Syria unless accompanied by parents or relatives,” Alloush noted.

Omar Ahmad, another official at Bab al-Hawa crossing, told Al-Monitor, “Upon their arrival to Bab al-Hawa, visitors have to clearly state how long their holiday is inside Syria. Many Syrians do not wish to stay long as they are committed to their jobs in Turkey or to their studies in university. These people’s visits are designated as short visits. We have been taking the necessary security measures to organize the process and to prevent any emergency or overcrowding.”

The Eid holiday is an opportunity for thousands of Syrian refugees living in Turkey to visit their hometowns and villages they left years ago, and a chance to meet friends and relatives after having been separated for a long time. Some Syrians have not visited Syria for four or five years.

Displaced Syrian Samer Maari told Al-Monitor, “My family and I are very happy that we were able to cross into Idlib to spend the holiday with our family and friends. My children missed their grandparents. My family and I have been living in Turkey since 2015 and we are staying there for the meantime. But we will spend the next month in Idlib before we return to Turkey, as my children must be there before the start of the school year.”

Syrian refugees residing in Turkey were allowed to enter Syria for the Eid al-Adha from two other crossing points in the Euphrates Shield area in northern and northeastern Aleppo countryside. One of them, the Bab al-Salama crossing, has been open since Aug. 1. By Aug. 16, it had processed 300,032 visitors. The Jarablus crossing opened on the same date and by Aug. 15, 13,194 people had passed through.

Alloush explained, “Many families are coming from Turkey to spend the Eid holiday wish to remain in their hometowns and cities and will not return to Turkey — of course, if the security situation remains stable and the regime does not attack the area.” But heavy shelling on Idlib and other areas under the Syrian opposition's control could change many of those optimistic plans.