In search of money and power, one young Syrian man considered signing up with the army, then joined a rebel faction and later the Islamic State, but was ultimately rewarded with death. 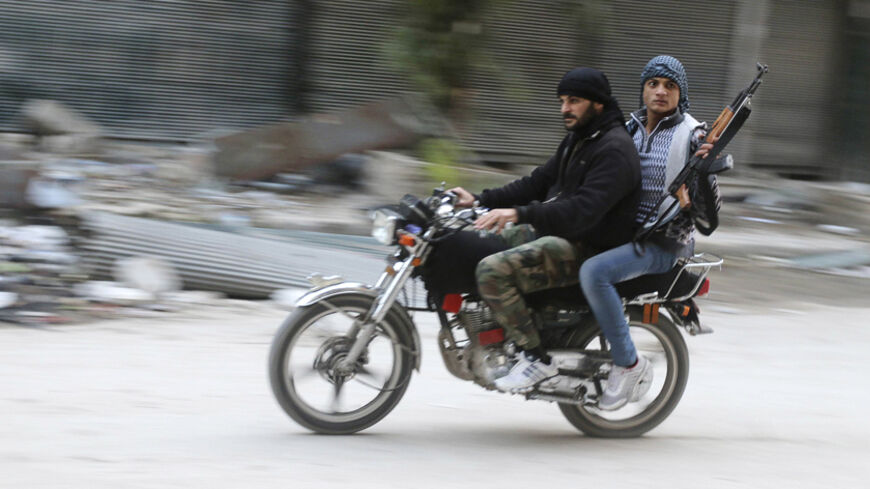 As war swept across Syria like a tsunami, it has forever changed the nation’s social fabric. The conflict has ravaged the people’s attitudes toward one another and their country's future.

Perhaps nothing sums up this change better than the words of iconic human rights activist and symbol of peaceful, moderate and secular uprising Razan Zeitouneh: “At the beginning, the revolution brought out the best in us, but after a while the worst started coming out, too, in remarkable synchronicity.” The inspirational Zeitouneh was a fearless, selfless lawyer dedicated to defending the rights of the oppressed and her nation from tyranny. She was first persecuted by the regime, and later kidnapped by rebels in Douma and "disappeared" with her team.

This, sadly, was the case for many armed men who joined the revolution out of opportunism and a selfish desire to enrich themselves at the cost of the suffering of their people and destruction of their nation. Many saw the chaos and upheaval of mass civil conflict as a once-in-a-lifetime opportunity to be someone, but put less thought into who that someone would be, other than violent and armed, with a large ego and some money.

Recently I met with olive farmer Abu Waleed while he was in Aleppo visiting his family. Abu Waleed has sizable lands near the town of Malkieh, and I’ve known him from the days I used to visit the area near Malkieh with friends. Abu Waleed recounted the story of Ahmed, a young farm laborer who worked for him, driving the tractor in the olive tree groves in the northern countryside of Aleppo. The story of Ahmed, who was from a village near the town of Azaz, bordering Turkey, is a striking example of how the Syrian revolution brought out the worst in people even before it had the chance to further its ideals of pluralism, tolerance and democratic civil rule.

When civil unrest first broke out and started leaping from place to place in Syria like an infectious fever, Ahmed saw his first opportunity. He wanted to join the Syrian security services — Amn el Dawleh in Aleppo city — which had just recently opened to fresh recruits. Abu Waleed recalled, “Ahmed was delighted; he wanted to go and join up. ‘They will give me a gun and a nice salary,’ he said, ‘I will have power and be feared in my village.’ It didn’t seem to us like he was very concerned with the news that these security forces he wanted to join were shooting and killing people on the streets.”

Ahmed was eventually convinced not to go through with it, as a new and better deal soon came to town: the rebel militias. Arms flowed into the northern Aleppo countryside through the old smuggling routes that had served the people of Azaz' livelihoods for decades and new local militias started appearing everywhere in early 2012. Ahmed quickly joined what would become the “Fateh” brigades of Azaz, a largely criminal outfit geared toward extortion, theft and abuse of both local people and passers-through. They were involved initially in the fighting that ousted the small forces the Syrian regime had sent to restore its authority in the area, but after that small victory, they rested on their laurels and started to reap the fruits of their labors.

“Ahmed became an abusive mini-tyrant,” said Abu Waleed. “He was full of himself. His gun and militia had given him power, and it went to his head. He started going after people who he thought had wronged him when he was an impoverished laborer. He shot and killed one of them after deliberately provoking him, a middle-aged man who had once beaten him for leering at and harassing local girls.”

Ahmed is by no means unique. There were many like him who quickly corrupted the revolution and helped turn it into a destructive force of wanton violence, revenge and crime.

“Many young men seeking fortune and glory from our village and nearby joined those big militias,” Abu Waleed said. “They became the tough go-to guys, our de facto ruling class. They were satisfied they had done their job. 'The regime has fallen in our areas,’ they would say. They never bothered to fight it anywhere else, on other fronts. For them, they had liberated a piece of land for themselves, and we were their subjects now.”

But this warlord utopia wouldn’t last long. The Islamic State (IS) and its former rebel allies turned on one another and split from Jabhat al-Nusra in Syria.

IS came to Azaz and took it with a handful of fighters in September 2013. Abu Waleed recounted how they came to town and gave an ultimatum to rebel groups there, going from one headquarters to another with the same message: “You have two days to leave Azaz. If you resist, you will all be killed. If you stay, you must join us and pledge allegiance to our leader [Abu Bakr] al-Baghdadi."

Abu Waleed added bitterly, "Most of them packed up their gear and were gone the next day. Like scuttling rats, they left for the Bab el Salameh crossing. [IS] came in unopposed the day after, and did a victory lap around the town in their pickup trucks. Some stayed, including Ahmed, who thought this would be an even better opportunity to join a stronger group and get more power and plunder.”

This would prove to be a tragic miscalculation. IS knew about Ahmed and people like him. They had no time for criminal layabouts. He was cannon fodder, sent straight to the frontlines in Deir ez-Zor to fight against local groups and Jabhat al-Nusra at the time when IS was trying to establish its caliphate. Instead of the easy life he hoped for, he was soon killed in April and his remains sent home to be buried in his village a couple of weeks later. Abu Waleed got the news from Ahmed’s brother, who had always disapproved of his activities but could never convince him to stop.

Ahmed’s story is the story of a revolution gone awry, a tale of broken dreams of what Syria could have become and what it turned into instead.