By redirecting the South Stream pipeline toward Turkey, Moscow has “outsourced” the project to Ankara, a much tougher negotiator to face the Europeans. 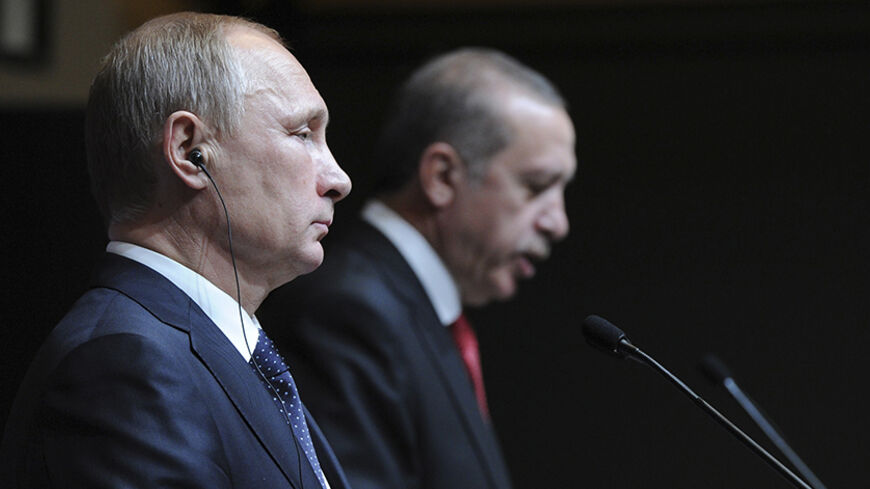 Russia's decision to redirect the South Stream pipeline toward Turkey came as a shock to many European nations. The European Union's attempts to bargain more concessions from Russians by being intractable on various technical aspects had the opposite effect. Those who pinned their hopes on the project as a source of energy stability were left puzzled and discontented. Although Moscow's move can be interpreted in many ways, it fits into Russia's larger strategy in contemporary international politics.

The idea to empower other crucial regional states to create a multipolar world has long been on Russia's global agenda, and it has recently signed milestone deals with China, Turkey and India during visits by President Vladimir Putin.

To deal with the emerging powers, Moscow needs significant political and material resources. Already a nuclear superpower, under Putin, Russia has also become an energy superpower, with pipelines giving it serious leverage in its foreign policy. Certainly, the current drop in hydrocarbon prices exposed the weaknesses of this "weapon" for Moscow. But even though Russia does not have the power of the Saudi-led OPEC to control oil prices, it still has influence over gas supply. This is, or was, Russia's competitive advantage in foreign affairs. Its current disappointments over Western policy made Moscow play probably its biggest ace too early in the game.

The calculations were by no means emotional. In its original form, the South Stream was going to be an extremely costly, technically complicated project engaging too many states with diverging policies and interests. By "outsourcing" the project to Turkey, Moscow is making the Europeans deal with Ankara — a much tougher negotiator.

However, by redirecting the South Stream toward Turkey, Russia outsmarted itself. The new deal with Turkey has just entered its initial stages. Now that Moscow has cut ties with the Europeans, it has a weaker negotiation stance with Ankara and is already offering Turkey a 6% discount to make the project look more lucrative. President Recep Tayyip Erdogan understands the situation well, and may bargain for more.

With several crucial pipelines running through Turkish territory, including those from the Caspian basin, it is Turkey that is now becoming an energy superpower without having vast energy resources itself. If the deals to increase supply to Europe by purchasing gas from Iran and Iraqi Kurdistan go through, Turkey will be Europe’s primary energy hub. In fact, it will cover the whole southern flank, accumulating energy resources from Russia, Central Asia and the Middle East. This will make Turkish influence on the European energy market equal to that of Saudi Arabia on the global one.

Russia's reputation has suffered losses among three critical partners with whom it has enjoyed good relations in recent years — Italy, Serbia and Hungary — and, to a lesser extent, Austria. Turkey acquired a strategic leverage over the Balkans — a region where it had always had vital interests and a troubled historical profile — as well as over the European Union in general. After decades of waiting at the door of European integration, Ankara can now dictate its own terms. Eventually, the deal will win Russia a fast-growing consumer market and the income it needs for its sick economy, while Turkey gets gas, influence and power.

The Russian South Stream gambit was hotly debated at home. Critics argued it was not in Russia's best interests to empower one of its key historic regional rivals — even though the parties left contradictions over Syria, Nagorno-Karabakh and Crimea beyond the framework of the agreement.

Indeed, as Turkish power grows, conflicts over Syria and other issues in the Middle East are put on a bilateral “freeze.” Ankara’s policies may not sit well with Moscow, even though the latter may never voice these concerns publicly.

In general, Russia’s decision has greatly increased Turkey's geopolitical significance, from Europe to the Middle East. If China was the biggest winner of what Putin once called the "Crimean spring," Turkey is the biggest winner in the "South Stream autumn."