The failed vote at the UN Security Council exposes the Palestinians' problem of conveying the daily suffering of life under Israeli occupation to the world. 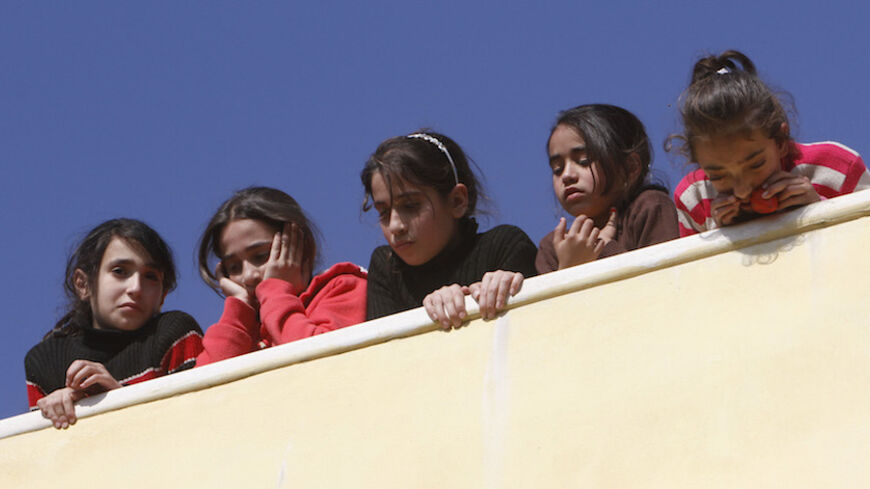 Palestinian girls watch as mourners carry the body of 17-year-old Palestinian Imam Dwikat, who was shot dead by Israeli troops, during his funeral in the West Bank village of Beita, near Nablus, Dec. 30, 2014. - REUTERS/Abed Omar Qusini

One of the most exasperating problems facing Palestinian efforts to end the Israeli occupation has been conveying to the world the daily suffering that they endure under it. The difficulty of the effort continues, as the Palestinians struggle to find an effective strategy internally or through the world’s leading forum, the UN Security Council, to lift the occupation.

The interest of politicians, pundits and journalists usually piques about the Palestinians after sensational news generating major headlines, such as multiple killings, major settlement activities or various political machinations. Real-life, everyday events occurring throughout the occupied territories are rarely covered, although they are accessible through various public platforms.

To bring this issue to light, there is a need to look at the micro picture, not just the big picture. A painstaking observance of daily events in the occupied territories gives a contextual picture of why ending the occupation is the No. 1 priority of Palestinians. Here is a list of news items from Dec. 28 as reported by the official Palestinian news agency, WAFA:

Also on Dec. 28, another news source, Wattan TV, reported that a youth and child had been arrested in the Old City of Jerusalem. The site also reported that Israel had informed the Red Cross that it had canceled the visits of 75 family members to see their imprisoned sons.

On Dec. 26, the Israeli army had forcibly halted a nonviolent Palestinian effort to establish "Ziad Abu Ein village" on lands under threat of confiscation south of Bethlehem. Days earlier, the UN weekly report for Dec. 16-22 on the situation in the occupied territories detailed the following events:

Major news agencies report on the big stories, but the above types of stories often appear to lack punch because of the absence of field reporting, photos and videos. The situation facing Palestinian journalists, especially cameramen and women, trying to cover events in the occupied territories reveals another problem too often underreported.

In its report for November, the Palestinian Center for Development and Press Freedoms (MADA), cited 24 violations against the Palestinian press that month. “The most frequent (9) were serious physical assaults,” the report noted. MADA quotes victims’ testimony that “most of these attacks were deliberate and targeted them directly.”

Israel's almost daily destruction of Palestinian homes built on Palestinian land is perhaps the one action that angers Palestinians the most. The war on Gaza raised the number of destroyed homes into the tens of thousands, and in the West Bank, away from the war zone, Israeli bulldozers continued to demolish more than a house a day on average. The Israeli Committee Against House Demolitions cites the following year-end statistics:

In its year-end summary of the situation in the occupied territories, the UN Office for the Coordination of Humanitarian Affairs declared the following areas to be of particular concern to the agency regarding Palestinians under occupation:

The above snapshot attempts to reveal the context of life under occupation frequently overlooked by the major world media outlets. Reporting by the New York Times’ journalist Isabel Kershner was recently criticized for the absence of context in the coverage of events in the territories

Palestinian diplomats and public officials have been trying, mostly in vain, to deal with these daily violations of human rights by reining in the Israelis and the effects of the occupation through various international forums. These diplomatic efforts are matched by a daily and weekly nonviolent struggle in the occupied territories aimed at sending the clear message to the Israelis that the presence of the military occupation and armed illegal settlers must end.

The Dec. 30 rejection by the UN Security Council to put an end to the Israeli occupation and its accompanying colonial settlement enterprise will no doubt only encourage Israel to continue its colonization of the territories, a process that the world opposes, at least in theory.

As the search continues for an effective policy to end the occupation, the Palestinians have few choices: either accept Israeli dictates through a "negotiating process" or look internally for a credible liberation strategy. The latter would ideally be based on an effective nonviolent popular struggle coupled with an international, people-based campaign to sanction Israel until it accepts people's right to self-determination, as highlighted by the overwhelming vote of 182 countries at the UN General Assembly on Dec. 19.