Hezbollah and the Future Movement have begun a dialogue on filling Lebanon's presidency, offering some reason for hope. 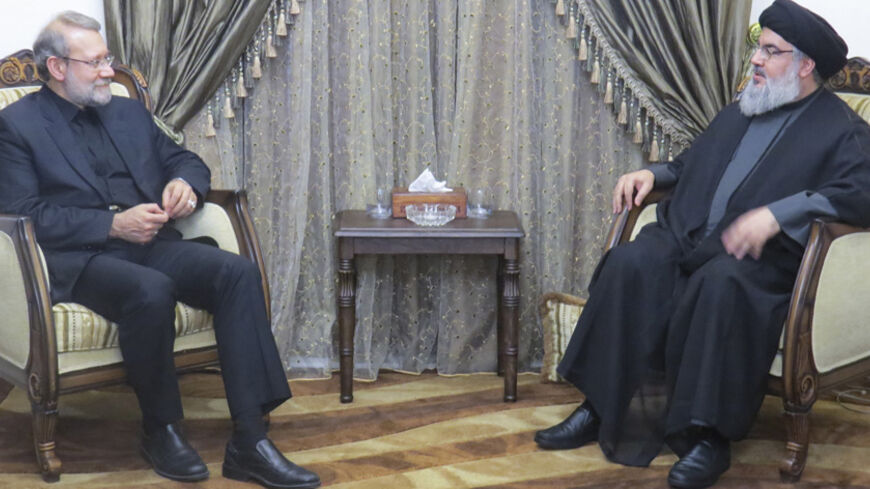 The Future Movement and Hezbollah held a dialogue Dec. 24 under the auspices of parliament Speaker Nabih Berri. Attending on behalf of the Future Movement were Nader al-Hariri, director of the office of former Prime Minister Saad al-Hariri, Minister Nouhad al-Machnouk and the parliamentarian Samir al-Jisr. Representing Hezbollah were Hussein Khalil, political assistant to the party's secretary-general, Minister of Industry Hussein al-Hajj Hassan and the parliamentarian Hassan Fadlallah.

Despite the positive nature of the event, no serious sign has emerged that the dialogue will lead to electing a president for the republic. The presidential issue is subject to a Saudi-Iranian settlement that seems far from being realized in light of the conflicts between the two countries over various regional issues, including Syria, Yemen and Iraq.

The threat posed by the Islamic State (IS) has resulted in a tactical rapprochement between Iran and Saudi Arabia, as both countries fear the growth of Sunni extremism, albeit for different reasons. The sole reason that the Lebanese government was formed in February 2014, after a 10-month delay, was from fear of the possible effects of a political vacuum on security. This was especially so after Syrian groups reached Beirut's southern suburbs, Hezbollah's stronghold, setting off a number of explosions. The tactical agreement stemming from the threat posed by the expansion of IS softened Hezbollah's stance and put an end to the party's boycott of sessions to elect a president.

One of the people following up on the dialogue between the Future Movement and Hezbollah told Al-Monitor that there might be a glimmer of hope for electing a president. Speaking on condition of anonymity, the source said, "Hezbollah is concerned about security developments on Lebanon's eastern border with Syria, especially after Jabhat al-Nusra and IS took control of the mountains and became a direct threat to Lebanon's Bekaa [Valley], which is Hezbollah's weak spot," he said. "Going too far with the presidential vacuum threatens security and stability and weakens respect of the state's institutions, particularly the security institution and the army, which is engaged in a military confrontation with terrorism. Not to mention the issue of the kidnapped soldiers, which embarrassed Hezbollah and left it no choice but to support the state's institutions."

The dialogue was accompanied by movements at the diplomatic level, starting with the Dec. 8 visit to Lebanon by Jean-Francois Girault, a French Foreign Ministry official. The most recent diplomatic effort was the Dec. 22 visit by Ali Larijani, head of the Iranian Shura Council.

Although the French diplomatic effort on the presidential issue is inconclusive, a Western diplomat in Beirut told Al-Monitor, "The French noticed a flexibility in the Iranian position. That is all, and they might have misinterpreted it. There has been no change in the Iranian stance." The question that remains is whether there is anything pushing Iran or Hezbollah to facilitate presidential elections.

The truth is that Iran and other countries are well aware that the required settlement is going to include Saudi Arabia, the country supporting the Future Movement. In this context, Larijani's visit was noteworthy on the eve of the dialogue as is a position he expressed Dec. 21 on a trip to Damascus. "We are being pressured through oil prices," said Larijani, at which point he hinted at a Saudi channel. This veiled criticism is closer to a negotiating position than political escalation.

The Christian problem remains represented by Gen. Michel Aoun, who is supported by Hezbollah as its preferred presidential candidate. In this context, a statement by Hezbollah's Khalil is noteworthy. "Aoun is our only candidate. If anyone has another candidate, let him discuss it with Aoun," he said.

Khalil's words reveal a readiness to negotiate a different candidate without threatening the alliance with Hezbollah's only Christian ally. This is why the ball remains firmly in the Christian court. Thus, Christian quarters should expect efforts from France and the Vatican to resolve this long-running problem. This also explains why after visits to Saudi Arabia and Iran, scheduled to begin Jan. 5, Girault’s last stop will be the holy seat.