It's unlikely that the upcoming early elections will encourage disappointed Israeli Arabs to show en mass at the ballot boxes, though they are a political force to reckon with. 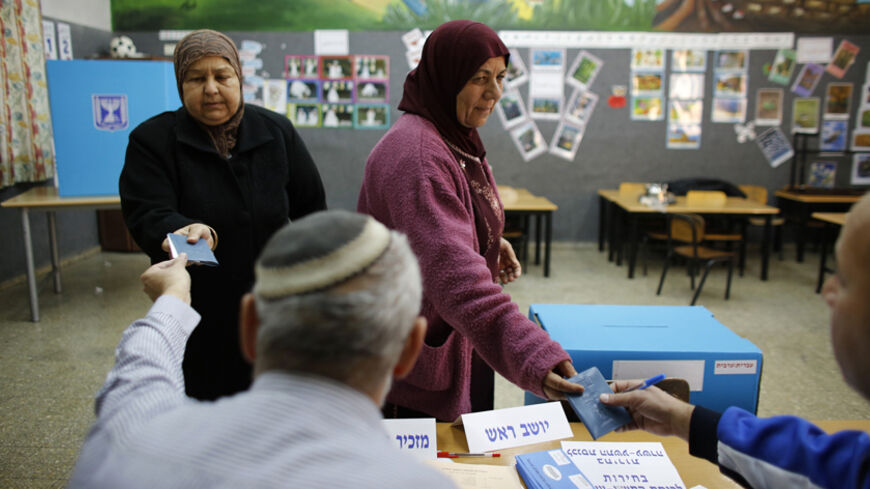 Women have their ID cards checked before voting in the parliamentary election in the northern Israeli Arab town Sakhnin, Jan. 22, 2013. - REUTERS/Ammar Awad

Just moments after the exit polls were released for the elections to the 19th Knesset in January 2013, disappointed Knesset member Ahmad Tibi (Ra’am-Ta’al-Mada joint list) declared that if the Arab citizens of Israel had used their voting rights, they could have generated a political turnabout and replaced Prime Minister Benjamin Netanyahu.

The voting rate among Israeli Arabs has declined gradually over the years, from 90% participation in 1955 to 75% in 1999. Later it reached a low of just 18% in the 2001 elections (for the prime minister's seat) following the events of October 2000, in which 13 Arabs were killed by police. This boycott reflected Israeli Arabs' disappointment with the overall political system, which they believed was responsible for the discrimination they faced. In the more recent elections, the Arab voting rate reached only 53-56%.

Based on figures provided by the Central Bureau of Statistics on the eve of the January 2013 election, some 15% of Israel’s 5.1 million eligible voters were Arabs (including Muslim and Christian Arabs and Druze). Only half of them went to vote, and the number of Muslim voters was even lower, because the voting rate among the Druze is considered high. If not for the boycott, Arab lists could have probably won more than the 11 seats they ultimately received, tipping the scales when it came to forming the new Israeli government.

Now Israel is preparing for yet another election, slated for March 17. This will undoubtedly be a tense, tough contest highlighting the rifts within Israeli society and expanding the chasm between right and left. The tension will be exacerbated further by the question of Israeli Arabs’ status in the country, with Netanyahu’s efforts to advance the nationality bill looming in the background.

Will Israeli Arabs rise to the call and defend their rights as equal citizens through the ballot box? While the nationality bill has been put on hold after the coalition collapsed, it might be revived if Netanyahu is elected to yet another term in office. Could this bill unite the Israeli Arab sector in a protest vote at the ballot box, bolstering support for the proposed law’s opponents?

As of now, the Arab parties are not ready for the elections, and it's doubtful they will be ready in the coming weeks.

Nevertheless, every commentator familiar with the mood among the Arab sector and its voting patterns is convinced that if the right-wing parties wage an aggressive intimidation campaign against the Israeli Arab community to exclude them, it could backfire. In fact, such attempts by the right could draw more voters to the polling stations, if not in support of the Arab Knesset members of whom they are tired, then at least on behalf of those left-wing and center parties, which would amount to indomitable opposition to this campaign against the Arab community.

Editorials in the Israeli Arab press and articles being shared on the various social networks show a propensity to ponder and even criticize the current trend. The authors wonder whether a boycott of the election by the Arab electorate is not having a boomerang effect. Are Arab Israelis acting against their own interests by avoiding the elections? On Facebook, many Israeli Arabs have added stamps to their profile pictures reading, “I am a second-class citizen.” They ask whether the rise of the right might have been avoided or at least reduced somewhat if the Arab sector in Israel had played a more active role in the political game.

“It is still too early to predict whether the nationality bill will cause a turnabout and change voting patterns in the next election,” political consultant Iman Samara told Al-Monitor.

He was asked, "On what does that depend?" Samara replied, "Everything depends on whether the Arab parties have the good sense to consolidate. The electoral threshold has been raised to 3.25%, so if the heads of the Arab lists don’t overcome the enormous differences between them and find an acceptable formula to decide who will head a united list, some of those lists could well find themselves out of the Knesset. The problem is that even if there are potential voters in the Arab sector who would want to vote, their lack of trust in the Arab parties will keep them away from the ballot box."

Al-Monitor asked, "So in your opinion, will the Arab parties have the good sense to consolidate?"

Samara answered, "A war is being waged between the Arab parties, particularly between Hadash and the Balad parties, and it has lately reached unprecedented levels of intensity. In an exit interview with Israeli daily Haaretz, Mohammad Barakeh, who is about to resign as head of Hadash, attacked former Knesset member Azmi Bishara for the money that he is sending to his party from Qatar. Tensions between the lists and the exchange of accusations only increase the political divisions among the Israeli Arab community. Given these divisions, even the most urgent issues pressing on the Arab society are being pushed aside. The prevailing feeling is that one cannot depend on the Arab Knesset members, and that they are not the ones to bring relief to the dire problems facing the Arab sector."

In a conversation with Al-Monitor, Hussein Sweidi, a senior editor of the popular Al Sinara newspaper, said that to recruit voters, the Arab lists will have to refresh their ranks and “appeal to a disappointed electorate. For example, Hadash is in negotiations to include a popular former mayor, which might attract new voters and provide a sense of freshness. But that is not enough. I don’t think that this will reverse the trend.”

Al-Monitor asked, "What about voting for other parties, like the Labor Party or Meretz? Do they have the potential to receive votes from the Arab sector?"

Sweidi said, "The Labor Party gets at least one seat from the Arab sector, and it could eke out a second seat if it does the necessary groundwork. Meretz doesn’t have a lot of support. There is a feeling that Meretz has abandoned the Arab voter. There is some support in the villages of the Triangle [in the north of Israel] because of Knesset member Issawi Frej from Kafr Qasim, but that’s all. You may be surprised, but the Likud also has approximately one seat from the Arab sector. The only way there might be a change in the trend is if there is a dramatic change within the Arab parties themselves, and that does not look likely, at least for now."

When asked, "What has a greater impact: overall disappointment with the Israeli political system or more specific disappointment with the Arab Knesset members?" Sweidi replied, "Frustration with the Israeli political system is first and foremost. Then comes a total distrust of the Arab Knesset members. They didn't undergo any change or any refreshment process for great many years."