US official claims gains in curtailing IS oil smuggling

Energy and Iraq experts question US assertions of success in closing longstanding smuggling routes used by Islamic militants to send oil and other products from Iraq and Syria to Turkey and Jordan. 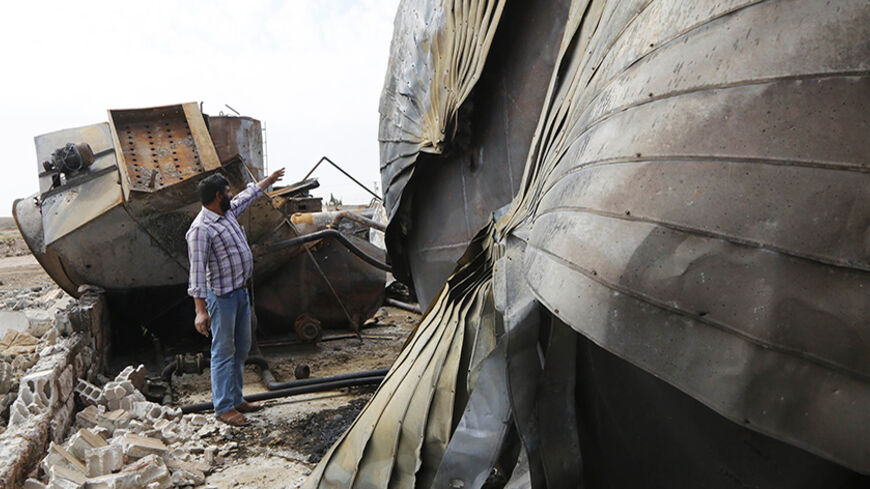 A man points at damage to an oil refinery and a gas station that were targeted by what activists said were US-led airstrikes, in the town of Tell Abyad near the border with Turkey, Oct. 2, 2014. - REUTERS

Amos Hochstein, the State Department’s special envoy and coordinator for International Energy Affairs, said Dec. 8 that the US-led effort to reduce Islamic State (IS) oil revenues has been “remarkably successful in a relatively short period of time,” but independent experts questioned whether the gains extend to local markets and long-standing smuggling corridors.

Hochstein provided no firm estimates about the amount of oil and refined products the jihadist group is selling but asserted, in comments before the American Security Project, that “the Wild West days are over” when it comes to such sales.

Six weeks ago, Treasury Undersecretary David Cohen told another Washington audience that the multinational effort to defund IS was "in the early stages" and that the group was earning $1 million to $2 million a day just from smuggling oil.

Hochstein said that coalition bombing had destroyed much of the militant organization’s refining capacity and that the Turks and the Kurdistan Regional Government (KRG) in northern Iraq had responded to US appeals and begun to crack down on smugglers moving oil from IS-controlled areas in Iraq and Syria.

Since Cohen spoke, Hochstein said, in response to a question from Al-Monitor, “We’ve had an upgraded air campaign and arrests are being made by the KRG.” If a few months ago, IS was able to produce about 50,000 barrels a day, “I believe today they are producing far less than that,” he said.

Other experts were not as sure about the progress.

“It’s far more complicated,” Denise Natali, an expert on the Kurdish region at the Institute for National Strategic Studies of the US National Defense University, told Al-Monitor. While Kurdish authorities last month announced the arrest of 11 people for smuggling oil for IS through the region, Natali said it was unclear whether those apprehended — who included members of the peshmerga ministries of ruling Kurdish parties — were still in jail.

Some of the smuggling routes, Natali said, date to the embargo placed on Iraqi oil after the 1991 Gulf War. The smugglers include former Baathists, Kurds, Turks and Jordanians, she said.

“There may be progress but the idea of uprooting smuggling networks is going to be challenging,” she said.

Natali and Simon Henderson, an energy expert at the Washington Institute for Near East Policy, said much of the oil is being used locally in the areas of Syria and Iraq that IS controls.

“As far as I can make out, they’re not trading it in anything other than small-scale quantities,” Henderson told Al-Monitor. “Getting a ballpark figure for this is challenging.”

“What you haven’t done is minimize demand for low quality diesel fuel” and other products manufactured and consumed in or near IS-controlled areas, Natali said.

Hochstein conceded that it would be impossible to shut off smuggling completely, noting that many of the routes for illicit trade date back centuries to the Roman era. Some of the oil is trucked from Iraq into Iran and onward to central Asia and Afghanistan, he said. Hochstein also acknowledged, “We have a lot of reports that the Syrian government is actively trading” with IS, which occupies most of Syria’s oil fields.

However, he repeated his assertion that the US-led effort is making progress against “the whole value chain” from oil production to consumer. IS is pumping less, refining less, employing fewer truckers and smugglers are having to use more indirect routes, he said.

“We are far more successful thus far than we thought we’d be but we still have a long way to go,” he said.

Hochstein also discussed the impact of lower oil prices and of new discoveries of natural gas in the eastern Mediterranean.

The sharp reduction from a high this year of $116 to about $66 a barrel for Brent crude is forcing Iraq to raise production to meet its budget needs, especially to rebuild its military to counter IS, Hochstein said. At the same time, the drop in prices is increasing pressure on Iran to reach a nuclear deal, he said.

Thanks to US-led sanctions, “we took them [the Iranians] from 23 customers to five and from 2.5 million barrels of oil a day [exports] to 1 million,” he said. Even if there is an agreement and sanctions are eased, Hochstein said, Iran would have difficulty reclaiming market share.

Besides the increases to world energy markets coming from US oil and gas, Hochstein underlined the potential for major gas production in the eastern Mediterranean. He said this could have a positive impact on resolving various geopolitical quarrels such as the long-standing dispute between Cyprus and Turkey and help meet rising demand for energy in Egypt, formerly a gas exporter. Hochstein also spoke optimistically about the so-called Southern Corridor, a network of pipelines intended to transport gas from the Caspian Sea to Europe.

David Koranyi, an energy expert at the Atlantic Council, told Al-Monitor that while the new gas discoveries “should act as incentive” to solving the Cyprus issue, “so far it has only exacerbated” the negotiations because Turkey and the Turkish part of Cyprus object to the exploration that the Republic of Cyprus has undertaken. That picture could change, Koranyi said, after results of new exploration are available next March.

As for the Southern Corridor, Koranyi said an existing pipeline from Azerbaijan to Turkey would have to be expanded. The other two pieces of the corridor — a trans-Anatolian pipeline from eastern Turkey to Greece and a trans-Adriatic pipeline from Greece to Albania to Italy — are to start construction next year. Koranyi agreed with Hochstein that the project would make a major contribution to European energy security.

Ultimately, the two agreed, Azeri gas could flow all the way to Ukraine.