Iran’s Supreme Administrative Council has approved the revival of the Planning and Budget Organization, a major promise of President Hassan Rouhani’s campaign and an asset Rouhani will need no matter how the nuclear negotiations turn out. 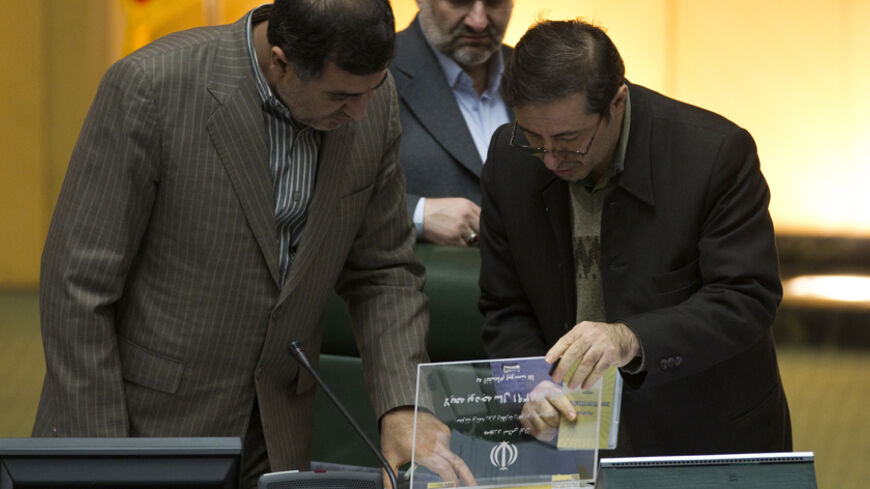 A correspondent in Tehran
December 8, 2014

On Nov. 10, Iranian government spokesman Mohammad Bagher Nobakht told the Islamic Republic News Agency that the Supreme Administrative Council has approved the revival of the Planning and Budget Organization. This move reverses one of the most controversial policies of former Iranian President Mahmoud Ahmadinejad, and is in line with attempts to restore stability to Iran’s domestic economic decision-making.

The Planning and Budget Organization is one of Iran's oldest bodies, created to supervise a seven-year civil construction program. It started in 1948 under Shah Mohammed Reza Pahlavi. In spite of the fundamental political and economic changes that followed the 1979 revolution, the organization continued to operate until July 7, 2000, when Reformist President Mohammad Khatami, hoping to strengthen it, merged the organization with the Administrative and State Recruitment Organization and created the Management and Planning Organization (MPO).

In October 2007, Ahmadinejad ordered the governors of Iran's provinces — all of whom were appointed by the Interior Ministry — to take over the duties of their provinces' MPOs. An economist in Tehran's Chamber of Commerce told Al-Monitor on condition of anonymity, “This was Ahmadinejad’s first economic coup d’etat.” He called the MPO “an independent organization,” but believes that Ahmadinejad saw it as a threat to his own economic plans.

The economist said that Ahmadinejad “wanted to spend the billion-dollar budgets the way he saw fit.” At the time, Ahmadinejad claimed that he had dissolved the MPO because it had been founded by the Americans.

He added that despite the Treasury receiving about $531 billion from the increase in oil prices during the eight years that Ahmadinejad was president, every year since the MPO was dissolved, Iran has run a deficit. Well-known Iranian economists such as Masoud Nili and Mehdi Taghavi estimated that in 2008, Iran's budget deficit totaled $6 billion to 10 billion, and $25 billion to 30 billion in 2009. In 2010, Iran's Central Bank officially acknowledged a deficit of $24.5 billion for that year.

“These problems were the result of dissolving an important organization in the country,” another official at the Tehran Chamber of Commerce told Al-Monitor, asking not to be named.

A professor of economics at Tehran's Tarbiat Modares University told Al-Monitor on condition of anonymity that if Ahmadinejad had not dissolved the MPO, then plans such as the low-income housing project Maskan-e-Mehr would not have devastated the housing market. “The Maskan-e-Mehr plan had no economic backing [or] proper management,” he said. “It was created as the result of a desire to do something big without knowing the consequences.” Ahmadinejad, who had championed populist policies, took great pride in the housing projects. However, some of the homes were poorly built and placed in unsuitable locations, and many believe that the homes had an adverse effect on real estate prices.

What’s worse, the Central Bank issued banknotes, raising inflation to a critical level. In 2005, the inflation rate had fallen to 10%, but in 2008 it reached 25%.

After the West imposed a series of tough sanctions on Iran in areas such as finance and energy, the value of Iran's currency, the rial, dropped significantly in the summer of 2012, and inflation reached 40%. In May 2013, just months before the end of Ahmadinejad’s second term, more than 200 parliament members wrote a letter asking him to revive the Planning and Budget Organization. “It was too little, too late,” said the economics professor. “One of the major organizations of the country was dissolved years ago, and they had just realized that it needed to be revived.”

Nonetheless, many economic experts believe that reviving the MPO can help President Hassan Rouhani’s administration in its quest to boost Iran’s economy. Prominent economist Saeed Leylaz said in an interview with Khabar Online, “Reviving the MPO will regulate Iran’s economy. When the MPO was dissolved by the previous administration, the economy went off track. It was a problematic situation, and eventually everyone realized its seriousness. It is a good sign that this organization is going to be revived.”

Reviving the MPO was a major promise of Rouhani’s campaign back in 2013. That it has taken 15 months to do so has prompted criticism from right-wing media outlets including Mashregh News, Fars News Agency, Yalesarat, the news website of Ansar-e-Hezbollah, Alef and Quds newspaper. Some Reformist newspapers, such as Mardomsalari, have also spoken out against the delay.

However, according to Leylaz, an increase in oil revenue is not always a positive development as far as the Planning and Budget Organization is concerned. He said, “Whenever there is a tsunami of oil revenues, the MPO becomes marginalized. This organization has never been capable of resisting the politicians’ temptations, and thus has always retreated.”

Currently, a few individuals have a good chance at becoming the next head of the Planning and Budget Organization, including Nobakht, Rouhani’s economic adviser Masoud Nili and Mohammed Ali Najafi, the former acting science minister who headed the organization under Khatami.