Shift to open market economy no easy task for Iran 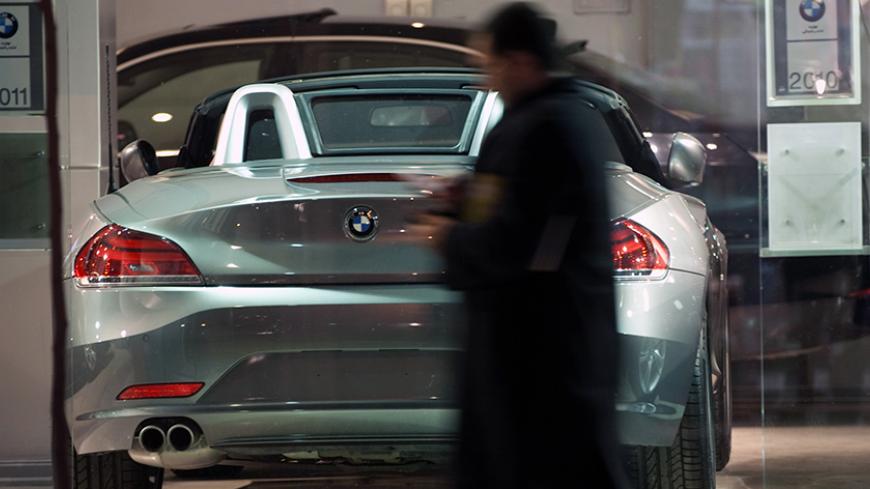 An Iranian man walks past a BMW displayed at a car shop in central Tehran, March 1, 2012. - REUTERS/Morteza Nikoubazl

TEHRAN, Iran — Late last month, the Management and Planning Organization (MPO) of Iran drafted the country’s sixth five-year strategic development plan. In the plan, the MPO urges the administration of President Hassan Rouhani to dissolve the Organization for the Protection of Consumers and Producers (OPCP), which critics say disrupts markets by intervening in pricing mechanisms. If the proposed action on this matter is passed by the parliament, the Rouhani administration will have one year to dissolve the controversial OPCP, which is affiliated with the Ministry of Industry, Mines and Trade.

MPO’s announcement came after Abbas Akhoundi, minister of roads and urban development, engaged in harsh criticism of OPCP executives who recently annulled his ministry’s decision to increase the prices of train tickets. Akhoundi slammed those seeking to artificially suppress prices as “socialists” and “Marxists” whose performance in recent decades has caused “monopolistic” groups to take shape in the country.

Despite efforts to apparently get rid of a state pillar that adopts distorting pricing policies, the MPO left two other disciplinary entities — the Governmental Discretionary Punishments Organization (GDPO), affiliated with the Ministry of Justice, and the Competition Council, affiliated with the Ministry of Economic Affairs and Finance — free to operate. These two organizations largely limit the public and private sectors from competitively pricing goods and services. Some economists say that if the Rouhani administration is serious about liberalizing the economy, it should order the dissolving of the GDPO and Competition Council as well, even as others consider it as overly challenging to completely liberalize the economy overnight.

Mohammad Ali Najafi, a Reformist politician and economic adviser to Rouhani, has publicly noted that the parliament and many senior officials still have deep concerns about a rise in prices. Indeed, public opinion favors populist politicians who voice support for the suppression of prices, regardless of the realities on the ground. Najafi believes the liberalization of prices should be gradual. His thoughts are shared by Yahya Al-e Eshaq, former president of Tehran's Chamber of Commerce, who believes any sudden hike in the prices of goods and services could deepen the ongoing recession, as the market is not yet fully competitive.

The need to develop genuine competition has also been underscored by Farshad Fatemi, dean of the School of Economics at Sharif University of Technology. If competition improves and the monetary regulator acts promptly to control the money supply, the economy will be more efficient and prices will increase moderately, Fatemi said.

More broadly, observers wonder how the Rouhani administration — which is composed of experienced technocrats and a big fan of an open market economy — has been unable to make a considerable change in the Iranian economy’s architecture. In response to these observers, Saeed Leilaz, a Reformist political economist, argued that the administration has had to deal with influential politicians who have turned to the media in the past two years to oppose price increases and question every single policy of Rouhani’s economic team. Yet given the ongoing pressures, the administration has been relatively successful in improving the business environment and liberalizing prices, Leilaz said.

However, Fatemi disagrees. He implicitly accuses Iranian governments of inaction, saying politicians win millions of votes “to make tough decisions at tough times.” Of note, with an exception of three years, Iran has suffered from a double digit inflation rate since 1973. Throughout these years, governments have mistakenly suppressed prices whenever citizens have complained about a rise in commodity prices — a prescription that has never worked. Fatemi believes that the authorities should have the commitment to fiscal discipline if they are concerned about high inflation, and he discourages direct intervention in the market — apart from exceptional cases.

Ordinary Iranians have traditionally expected the government to artificially maintain prices, despite surging costs — an expectation that has made it uneconomical for many businesses to keep operating. On the other hand, populist and semi-socialist groups within the establishment continuously push for a downward pricing regime. Liberal economists have been caught in a pincer between these two groups. Even if advocates of an open market economy are given enough room to maneuver, the Iranian market needs a prerequisite such as the existence of effective competition. Fatemi insists that in the absence of competition, there is always the threat of the emergence of “monopolistic pricing,” which in the long run will also jeopardize the supply side.

Thus, it appears that winning over public opinion is the most serious challenge the Rouhani administration is facing in its efforts to promote an open market economy. Close interaction is required between the government and the nation to introduce necessary economic sense into the public debate, so ordinary citizens will be informed of the advantages and disadvantages of a free market. The second challenge that needs to be addressed is the lack of consensus among economic elites. To achieve sustainable development by diversifying the oil-based economy, a consensus, such as the one that brought the nuclear dispute with the West to an end, should be reached among key economists and economic policymakers — regardless of their political tendencies.