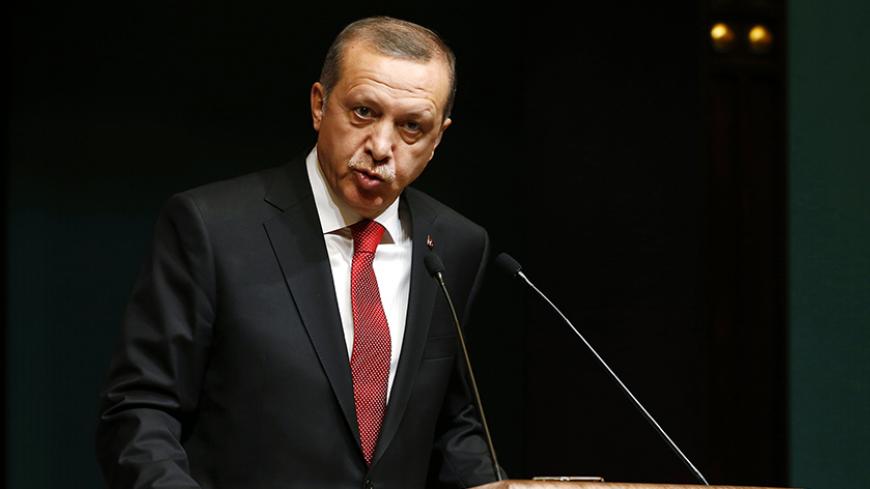 Addressing the First International Summit on Women and Justice held in Istanbul on Nov. 24, Turkish President Recep Tayyip Erdogan said the Islamic perception of the creation does not consider men and women as being equal, although they should be treated equally under the law. “We observe that women’s struggle for their rights got stuck in their fight for equality while missing the sense of justice,” Erdogan said. “What is it that women need?”

Erdogan also stressed that the Islamic faith honors motherhood and promises that heaven is beneath the feet of the mothers. “Islam did not grant that honor to fathers. I used to kiss the bottom of my mother’s feet. She used to pull them back and not permit me to do that. Yet I told her not to be irritated of it because there is the smell of heaven under her feet. She sometimes cried. Mothers are something else. Motherhood is the highest position [in humanity]. … But you cannot explain this to feminists, because they don’t accept motherhood. They don’t have such an issue. We are good with those who understand us and we continue our path with them.”

Erdogan’s remarks, however, received a strong backlash both from opposition parties and nongovernmental women's groups. Indeed, 57 women's organizations published a joint news release stressing that the constitution had granted equality between men and women since the foundation of the republic.

“President Recep Tayyip Erdogan also said in July 2010 that men and women can in no way be considered equal. President Erdogan’s statement [highlighting the inequality between men and women] therefore contradicts all the international agreements that Turkey is a signatory of regarding gender equality,” the joint statement said. “World Economic Forum Gender Inequality lists Turkey at 125th among 142 countries. Erdogan’s statement is nothing but proof that he would not implement any policies that would produce gender equality.”

Two days after his initial remarks, Erdogan took the 18th International Business Forum in Istanbul organized by the pro-Muslim Independent Industrialists and Businessmen's Association (MUSIAD) as an opportunity to continue the debate.

“You cannot put men and women on equal footing. What women need is to be treated at equal value with men rather than seeking equality,” Erdogan said Nov. 26. “Some domestic national newspapers, some international media organizations, picked just part of what I said the other day by distorting what I said. They presented it in a very wrong manner. No one can accomplish a thing with such moral failure.” He added by pointing at those who objected to his view on male and female inequality. “They know how to lie; they know how to act in hypocrisy; they know how to defame others; they know how to insult, but they lack honesty.”

However, Melda Onur, Istanbul deputy of the main opposition Republican People’s Party (CHP), warned people not to pay too much attention to what Erdogan says. “He says this to change the agenda,” Onur said Nov. 24, asserting that Erdogan was a master at setting the agenda for the nation to debate. Onur argued that people would have continued to debate the lavish and unaccountable spending for the new presidential palace if Erdogan had not come up with something that would have everyone across the board reacting. With the gender debate in play, the other issue immediately fell out of the headlines.

Figen Yuksekdag, co-chair of the pro-Kurdish People’s Democracy Party, concurs. “If a president says that it is not in women’s nature to be equal to men, you cannot find equality or justice in this country for anyone even though you may crave it,” she said Nov. 25. “There is no justice in this country because the state failed to create equality between men and women. The president suggests women are weaker due to their nature. They need to be protected because of that. If that is true, what did this government do to further protect the women? … Erdogan and the [Justice and Development Party] AKP government do not consider men and women equal in the arena of rights and freedoms.”

However, the AKP Women's Branch — which has been very effective in helping Erdogan win elections one after another — supported the president’s view and states that women started to be treated equally only after the AKP government came to power.

“The state was given the duty for the first time to protect men and women equally with a revision done to the constitution in 2004,” says one of their brochures under the headline “Women during the [AKP] government.”

But Ersan Sen, a law professor in Istanbul, told Al-Monitor that this was certainly not the case. “They added a paragraph to Article 10 of the constitution in 2004 and 2010 providing for 'positive discrimination' to enhance the equality of women. I personally did not think it was necessary and it did not provide any benefit,” Sen said. “What is important is not what is written on paper, but the practical reality. … Women need to be protected because they are human beings, not because their gender is different [than men].”

The remarks have inspired debate among women in Turkey.

“I believe our president is right on this issue,” Nalin Kalkan, a university student in Bolu with a head covering, told Al-Monitor. “If a woman is married, she needs to prioritize the peace and care of her husband and children. She should not create any discomfort at home. A believer is a person of balance. She needs to keep that balance.” She added, “I don’t believe that the president should speak about such private issues, but he might have done so because there are some who lost that balance.”

Another student with liberal leanings in Ankara, Selin Yarmak, however, felt differently. “Show me just one Muslim country where women are free, where men don’t treat their women as their property. He is focusing on inequality because that is what he wants people to think. Those women following him will understand their mistake when it is too late,” she told Al-Monitor.