Turkish women take to the streets to demand equality

Activists say 15 years of rule by President Recep Tayyip Erdogan has eroded women’s rights, even as he has vowed to end domestic violence and strengthen the role of women in Turkish society. 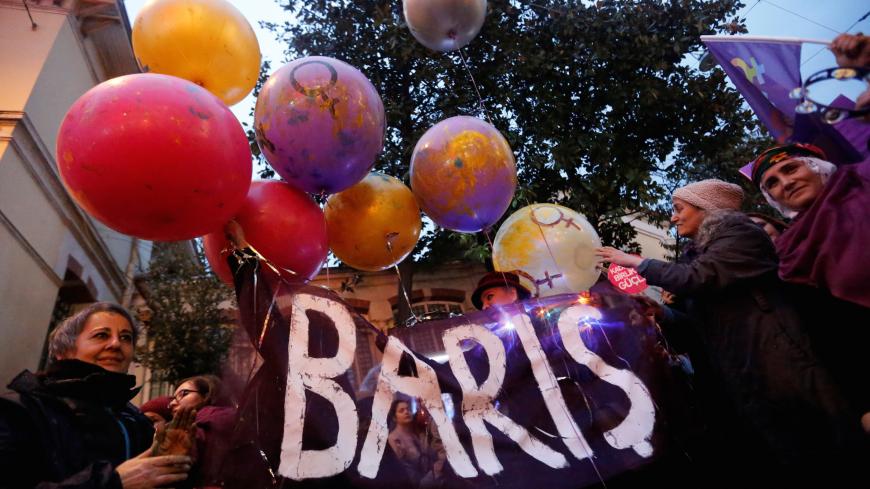 Activists hold balloons with a banner reading "peace" as they march at the main shopping and pedestrian street of Istiklal during a rally on International Women's Day in Istanbul, Turkey, March 8, 2018. - REUTERS/Murad Sezer

Thousands of women marched in central Istanbul today to demand an end to violence and greater equality with men in a country lagging behind its European neighbors in most benchmarks.

“We won’t shut up, we are not afraid, we won’t obey,” the crowd chanted, waving signs that read “When women jump, it’s a revolution,” joining worldwide commemorations from Afghanistan to Iceland on International Women’s Day, which celebrates women's rights.

“I came here to see that I am not alone. We are all fed up with attacks on women and children and impunity for men,” said Busra, a 24-year-old engineering student who did not want her last name used.

She may have been thinking about reports this week that a police officer was acquitted of rape charges after the alleged victim was found to have men’s telephone numbers and pictures on her phone.

Women’s Day has had a tumultuous recent past in Turkey, facing bans for security reasons and attacks by mobs of angry men. This year, governors in a handful of provinces prohibited gatherings, citing an emergency rule ban imposed in the wake of the 2016 military coup attempt.

On Sunday, police in the capital, Ankara, detained 15 people and used tear gas to break up a march by women getting a head start on Women's Day.

Turkish women say the biggest problem they grapple with is violence. Last year, 339 women were killed by domestic abusers, reports Anit Sayac, an online memorial to the victims. The platform We Will End the Murder of Women said last month was one of the deadliest, with 47 women murdered.

Nearly four out of every 10 women have been subjected to physical abuse in Turkey, according to a 2015 UN Women report on domestic violence. The Turkish government in 2016 put the figure far higher, at 86%.

The Family and Social Policies Ministry, which oversees women’s issues, counts 143 shelters with total capacity for 3,444 women and children, underserving a country with a population of 80 million people.

Turkey was the first signatory to the Istanbul Convention to combat violence against women, but lawyer Canan Arin said courts have reduced the period for restraining orders, the pact’s key introduction, to one month from six, forcing women to continuously renew them.

President Recep Tayyip Erdogan has vowed to combat the epidemic of violence, calling it “a bleeding wound.”

But activists such as Arin say women’s rights are backsliding after more than 15 years of rule by Erdogan’s Justice and Development Party (AKP), which espouses nationalist and religious policies.

Erdogan has indicated that gender equality “is against human nature” and that the notion of “feminist motherhood is unacceptable.” In 2016, he said, “Working women who avoid motherhood disavow womanhood [and] humanity.”

He backs strict limits on access to abortion, comparing the procedure to airstrikes on civilians, and regularly urges women to have up to five children to stave off the economic effects of a graying population.

“These declarations of male superiority, that women are not equal to men are repeatedly made. When the men leading the government say this, it filters down to the rest of society,” Arin told Al-Monitor. “And when you encourage the mentality that women and men are not equal, that’s when men begin to believe they have the right to murder women.”

In a Women’s Day message, the president said that excluding women in the economy, politics and education undermines Turkish society and that violence against women was a problem not just in Turkey but around the world.

“Together we must take steps, in accordance with our own history and culture, to correct mistakes and make up for shortcomings to strengthen the role of the woman,” Erdogan said.

His government has expanded affirmative action to boost female participation in education, health, employment and politics, he said.

Under Erdogan, Turkey has lifted bans on Islamic-style headscarves that barred devout women from attending university, entering the civil service and serving in the military.

Measures to reduce violence against women include training police and opening centers to provide legal and medical support to victims. But Arin said “a lack of political will” means violence is actually rising.

“What [the government] sees as important is the family, not the woman, who is not accepted as a person and individual,” she said.

A handful of public attacks by male strangers on women because of the clothing the women were wearing garnered media attention last year. One conservative news site said the reports were “difficult to believe,” and designed to sow outrage among secular Turks against the pious.

Some cities have introduced women-only “pink buses” and “pink taxis” and set aside public beaches for women, prompting questions about whether isolating women further may actually fuel discrimination.

“Because they are unable to prevent sexual assault of men, [authorities] introduce restrictions on women,” Arin said.

The UN Development Program ranks Turkey 69th in its Gender Inequality Index and 71st in its Gender Development Index out of 188 nations. Other measurements give Turkey even poorer marks. Turkey has sunk to 131st place out of 144 countries on the World Economic Forum’s Gender Gap Index for 2017.

Women make up less than a third of the workforce, and 64% are unhappy in their jobs due to low wages, the Confederation of Progressive Trade Unions said in a report this week.

The disparity is especially wide in politics. Founded as a secular republic in 1923, Turkey was an early adopter of women’s suffrage in 1934, when compared with other Muslim states. It elected its first, and only, female prime minister in 1993.

Today, women make up just 14% of parliament, with the AKP giving 11% of its seats to women, lagging behind the two biggest opposition parties.

More than a third of the lawmakers from the Peoples’ Democratic Party (HDP), which campaigns for women’s rights, are female. Five women are among the nine HDP deputies jailed on terrorism-related charges during the state of emergency.

“At a time when we are fighting for women, freedom and equality, we see those running this country trying to bend it to their will. Their stance toward women is clear … whenever the president talks about women,” HDP co-chairwoman Pervin Buldan said at a Women’s Day rally in the mainly Kurdish city of Diyarbakir, according to an emailed statement from her party.

The opposition says laws the AKP has ushered through, including one in November allowing Muslim clerics to conduct civil marriages, weaken women’s standing and encourage child brides. Parliament now wants to criminalize adultery and prepared a report on how to make divorce more difficult to obtain.

“Introducing religious tenets into all areas of life … is slowly eroding what rights we did possess,” Arin said.